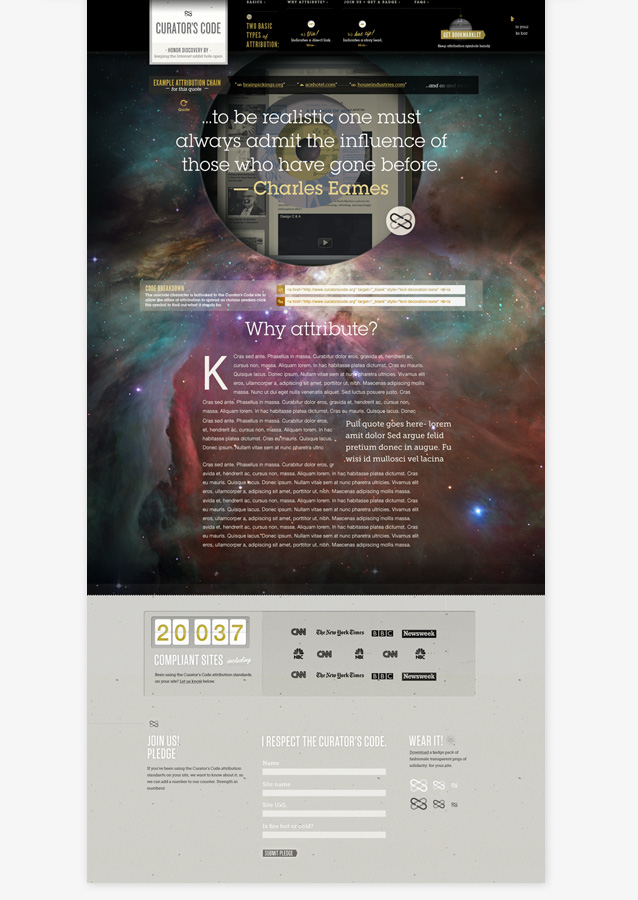 On Friday, we unveiled a system for attribution on the web called Curator’s Code.

Initially, I was ever-so-slightly skeptical about the Curator’s Code. Creating a formalized “system of attribution for internet content” sounded a bit like piling on rules—and perhaps even creating limitations—in the blissfully limitless (and essentially anarchic) space of the internet. And then I spoke to Maria more about it… (and, immediately inspired, signed-on to create a visual presence for this new movement.) 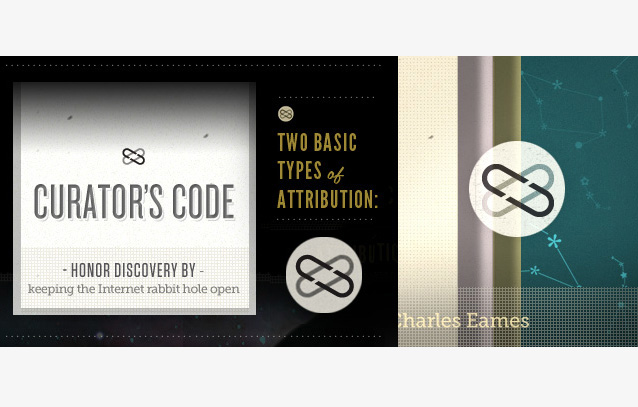 Maria, who writes the blog, Brainpickings, and works as a contributor to the Atlantic (among a half-dozen other hats she wears) is in the business of content curation+creation—and speaks passionately about attribution as an act of ethical responsibility and an act of creativity. Through attribution, we acknowledge authorship: the creative work of the artists, writers, musicians, et al. who have created the content in the first place (an ethical must in a culture where more powerful entities can exploit this free-floating labor. ↬ Serfing the Web) But through attribution, we also simultaneously give weight to “content curation” itself as a form of authorship—a creative act  (from a real person’s point of view) which adds up to more than the sum of its parts.

On a philosophical level, by attributing sources, we also honor the very concept of discovery. Any one who has lost themselves in hours of reading+clicking on the web and have found themselves wandering down a rabbit hole of links, knows that this can be a magical thing. Interconnectedness is, undoubtedly, one of the preeminent superpowers of the internet as a medium—one that has the potential to better and more realistically maps the flow/exchange of ideas than other mediums. And the ways that those connections happen can be fascinating.  Maria argues that this meta-narrative of where information comes from might be just as interesting as the content itself.

There are two ideas implicit in the Curator’s Code, which made me fall in love with the project:

1.) As there is value in content, there is also value in making the interconnectedness of this content transparent.  By leaving a trail of breadcrumbs for others, we are acting good stewards to others’ ability to discover, learn, interpret, and process. Rather that hoarding it for ourselves, why not acknowledge that influence and knowledge are gift economies? ↬ Lewis Hyde

“Nothing of me is original. I am the combined effort of everyone I’ve ever known.” — Chuck Palahniuk ᔥ Curator’s Code

2.) By celebrating that ideas do migrate and evolve, we work at dispelling that annoying/dangerous myth of the creative-genius-hit-with-a-lightning-bolt. By paying homage to the fact that all creation is cumulative, collaborative, and gradual, we can evolve the conversation about creativity beyond the inaccurate binary of original/plagiarized. This inaccurate binary worldview is oppressive (at this very moment, there are a hundred art school students simultaneously mouthing “it’s all been done before!” as a lame, but sincerely-felt excuse.) If you disagree with my assessment of creativity, please stop reading this now and see if Jonathan Lethem can sway you with his essay, The Ecstacy of Influence. He makes the argument that every idea has a life independent of its maker. The more that these life-of-ideas gets mapped, the more we actually/functionally defend creative work as a culture.

Given the weightiness of the content and the delicacy needed in the tone, the design of the Curator’s Code had to walk a fine line. It had to inspire, rather than scold. It had to portray attribution as small acts of activism (enriching the web), rather than simply being an “annoying rule” to follow. So… I decided to have legitimate, honest fun with it.

When Maria began talking about the notion of attribution opening up rabbit holes, I thought, “why not make the site itself a rabbit hole!?!” So for each quote that inspired Maria’s thinking, I illustrated a tunnel of attribution—receding back into the infinite space of the web. It is a completely literal (and self-consciously absurd) picture of the depth brought to the internet through the interconnectedness of attribution. The source-sites fall back in space, and can be casually explored with a responsive, parallax rollover state.

We did it. We poked a hole in the internet to show why the internet is awesome. The Internet is burning a hole of discovery through your very screen! 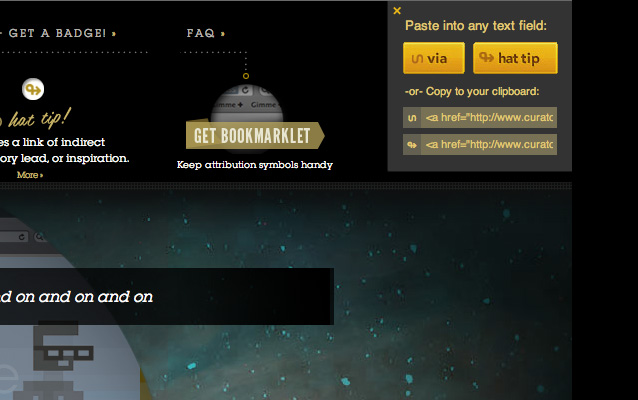 Read more about Curator’s Code on Brain Pickings, on The New York Times, in The Atlantic, or in Wired UK.

Credit where credit is due: Cameron and Jonnie built the handy-dandy attribution bookmarklet. Ciprian Badea helped me code by building a large part of the site.