A paper wheel answering the question: “Should I Take That Job?”

About a month and half ago, Adobe contacted me to “make something interesting” for designers attending AIGA’s annual event—pretty much a dream assignment! The project ended up involving two of my favorite things: lo-fi prognostication equipment and paper calculation wheels. 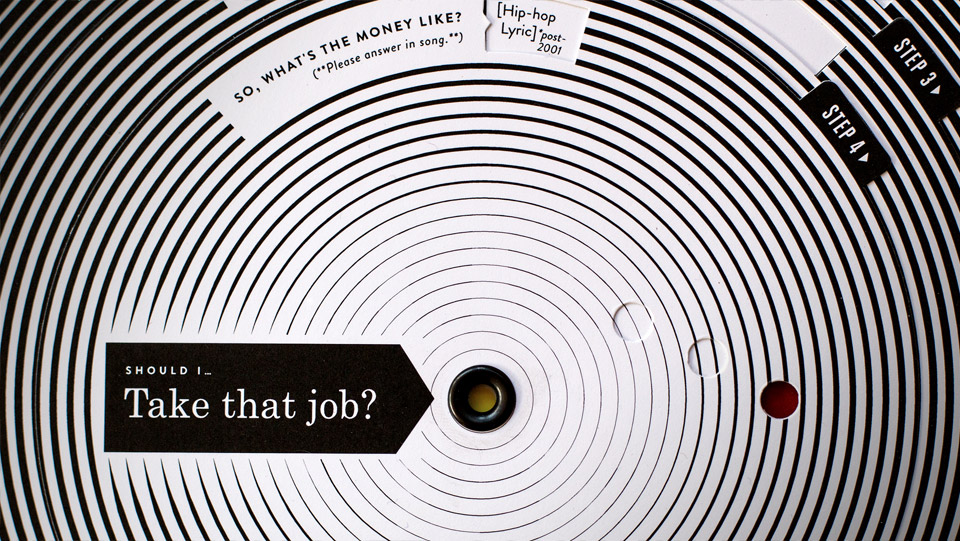 A paper calculation wheel is a type of volvelle which converts user inputs into answers via the *magic* of die cuts. They were pretty much the “apps” of the last century: they are devices programmed for a single purpose (although unlike apps, you can take them apart—see the physical mechanism behind the “logic”) These contraptions are sometimes described as rudimentary, single-function predecessors to the computer in the contemporaneous literature because they “compute things”: 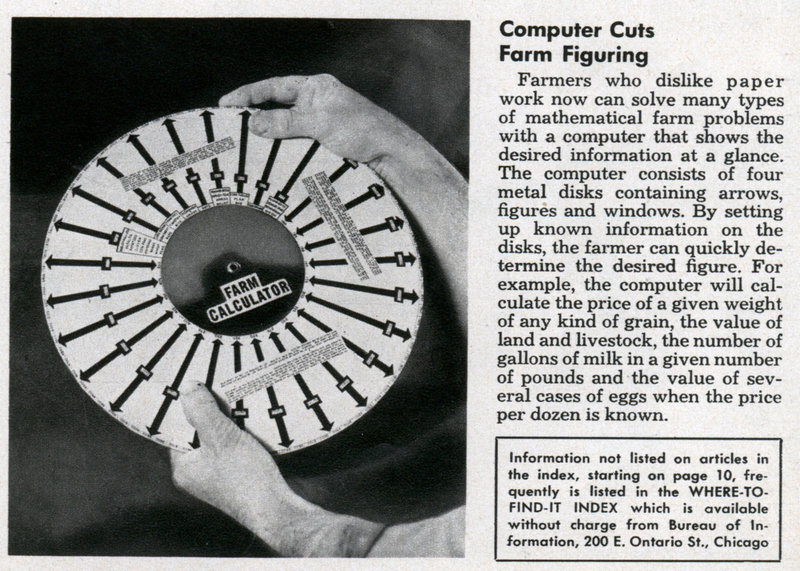 Given the audience of designers, I thought it would be fun to make a tool that “solves” a specific first-world-problem haunting all creative workers at some time or another: indecision about work. The field of design covers a vast range of activities—offering a lot of freedom… and therefore a lot of choices (make a zine? illustrate a book? design a typeface? create an object? code? improve public transportation routes? what to do today?!) The science of this collective situation repeats two contradictory storylines: on the one hand, studies show that human beings are happier when they have control and can make their own decisions—and on the other, neurologists have found that people do not become happier when their options increase. 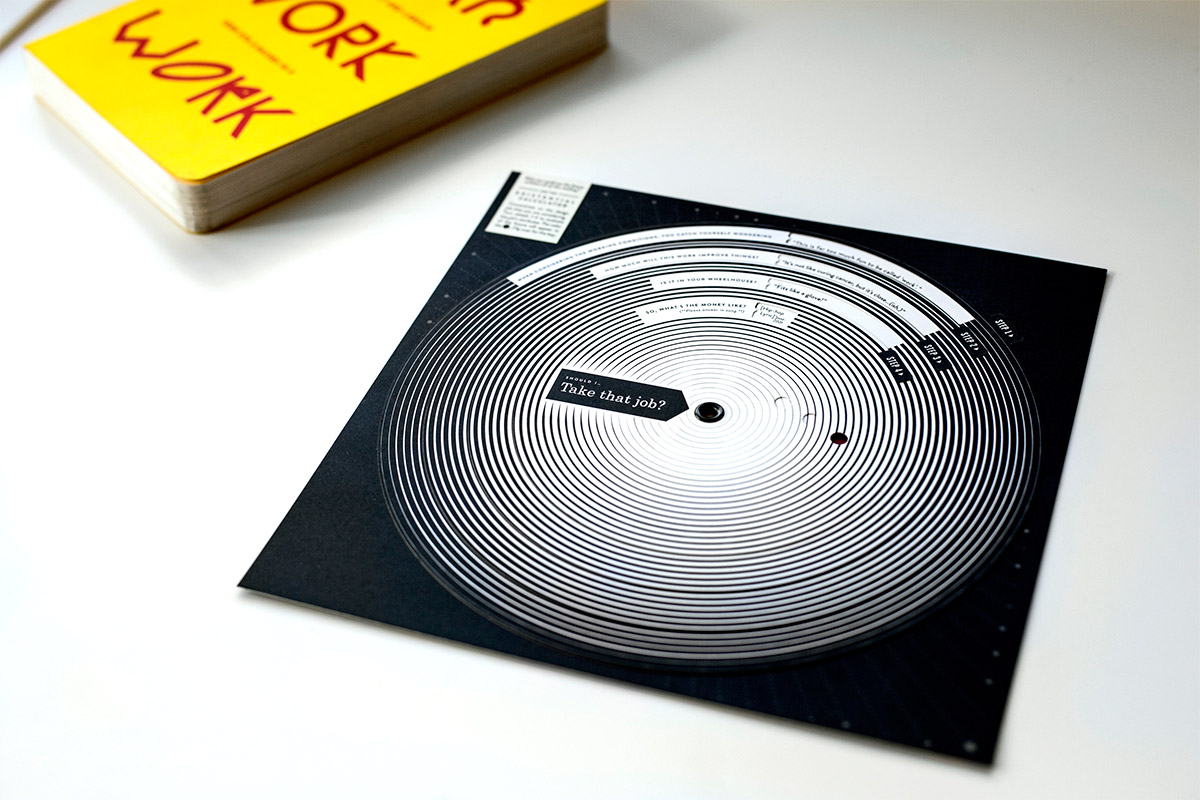 Thus, the agency (and validation) afforded by ‘having options’ seems to be complicated by this tricky business of choosing. Without actually seeing into the future, how can one possibly avoid a future full of regret?*

With these questions in mind, I set out on a quixotic pursuit to make an paper wheel calculator that could assist the designer by being more objective than the human mind in assessing whether or not the user should “take that job?” It’s part paper-wheel-calculator, part infographic, part mood ring, and part logic-exercise to help “see the future without all the waiting.” See it in action:

Here’s how it works

1.) The user is first instructed to concentrate and envision the job under consideration: 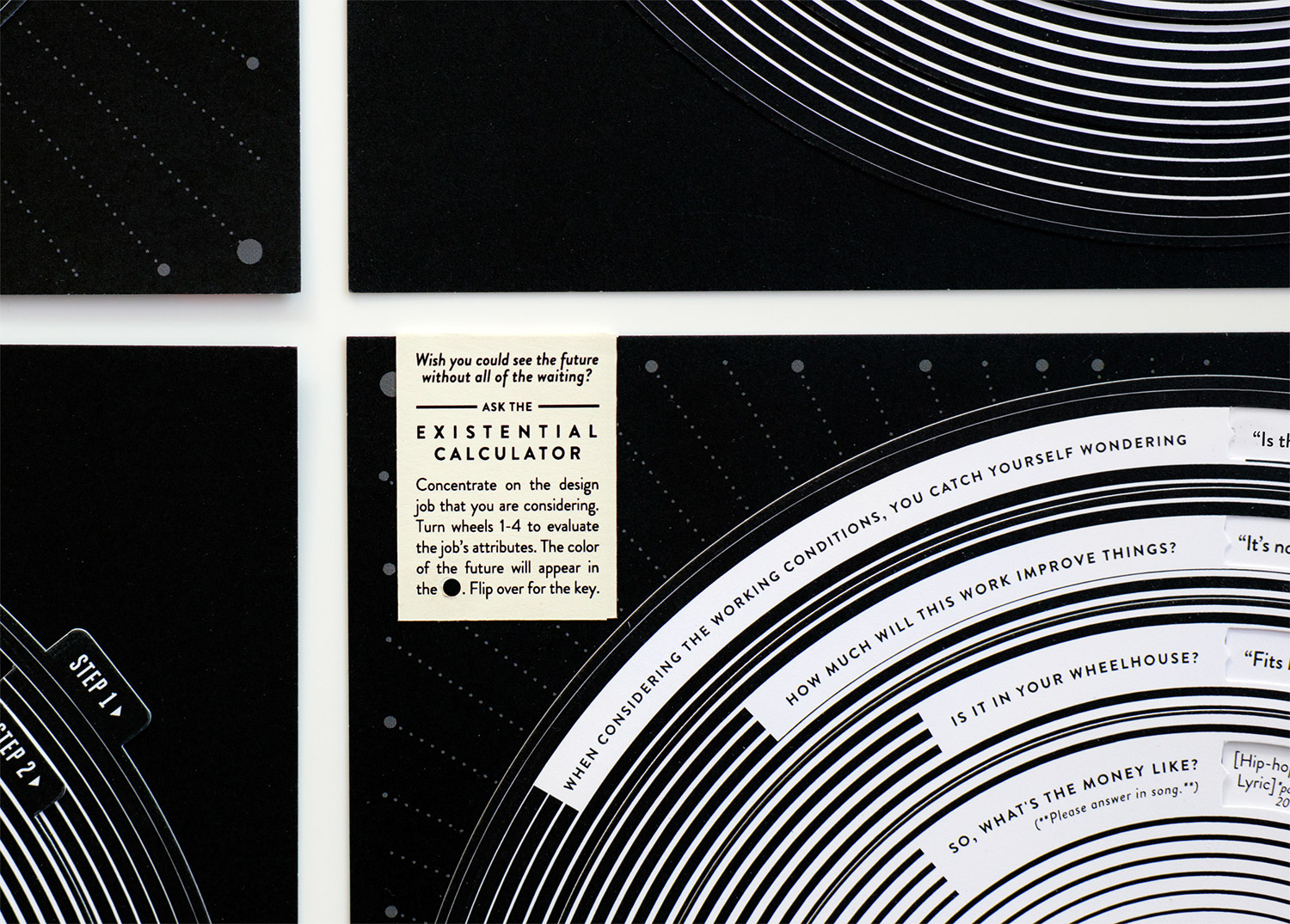 2.) They then assess the job’s attributes by turning the wheels/rating “fit”, pay, working conditions, and ethics. In real life, there are a multitude of other factors to consider, but these seem to be the big/universal ones.

The trick is in the copywriting: the assessment criteria is vague and subjective—asking the user reflect on his/her own feelings about the job (rather than literally rating the job on a rigid numerical scale.) For example, the “fit” rating is left open ended—and can encompass skill-appropriateness, career-level appropriateness and/or excitement-level. (In the wheel, “fit” is the most important factor/most-heavily-weighted factor—there are rarely instances where an ill-fitting job has a positive outcome.)

Similarly, “working conditions” is written so that it could potentially cover workload, hours, creature comforts, co-working relationships, and/or client personality. “Ethics” covers all potential externalities, asking the user to reflect upon whether this work will “improve things?” 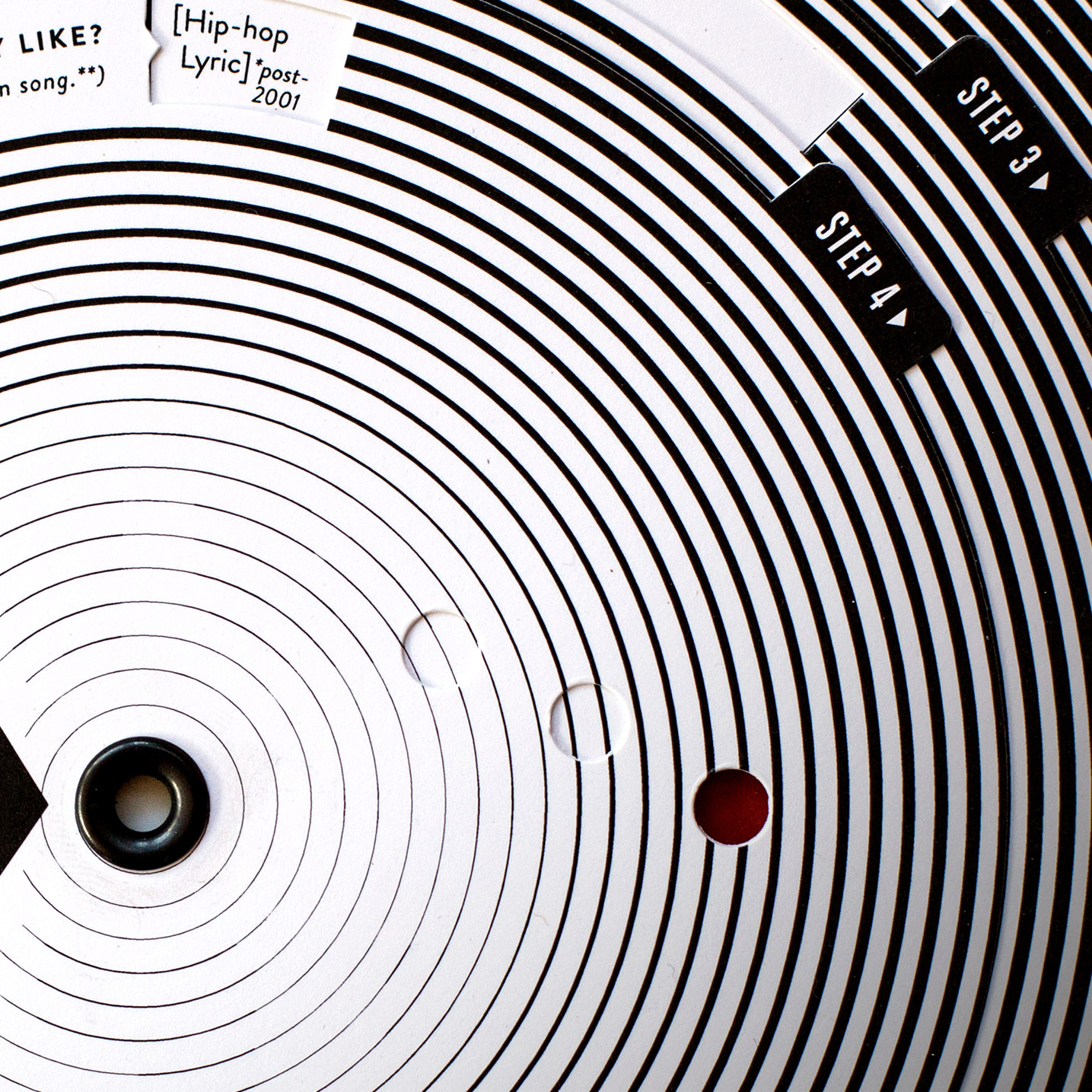 4.) On the back, the user finds their fortune-color in the center and travels outward to the edge to see where the future of this job will lead (indicated by the bracketing lines that they cross.) It is designed so that similar colors/fortunes in the wheel are adjacent to one another and can share attributes. 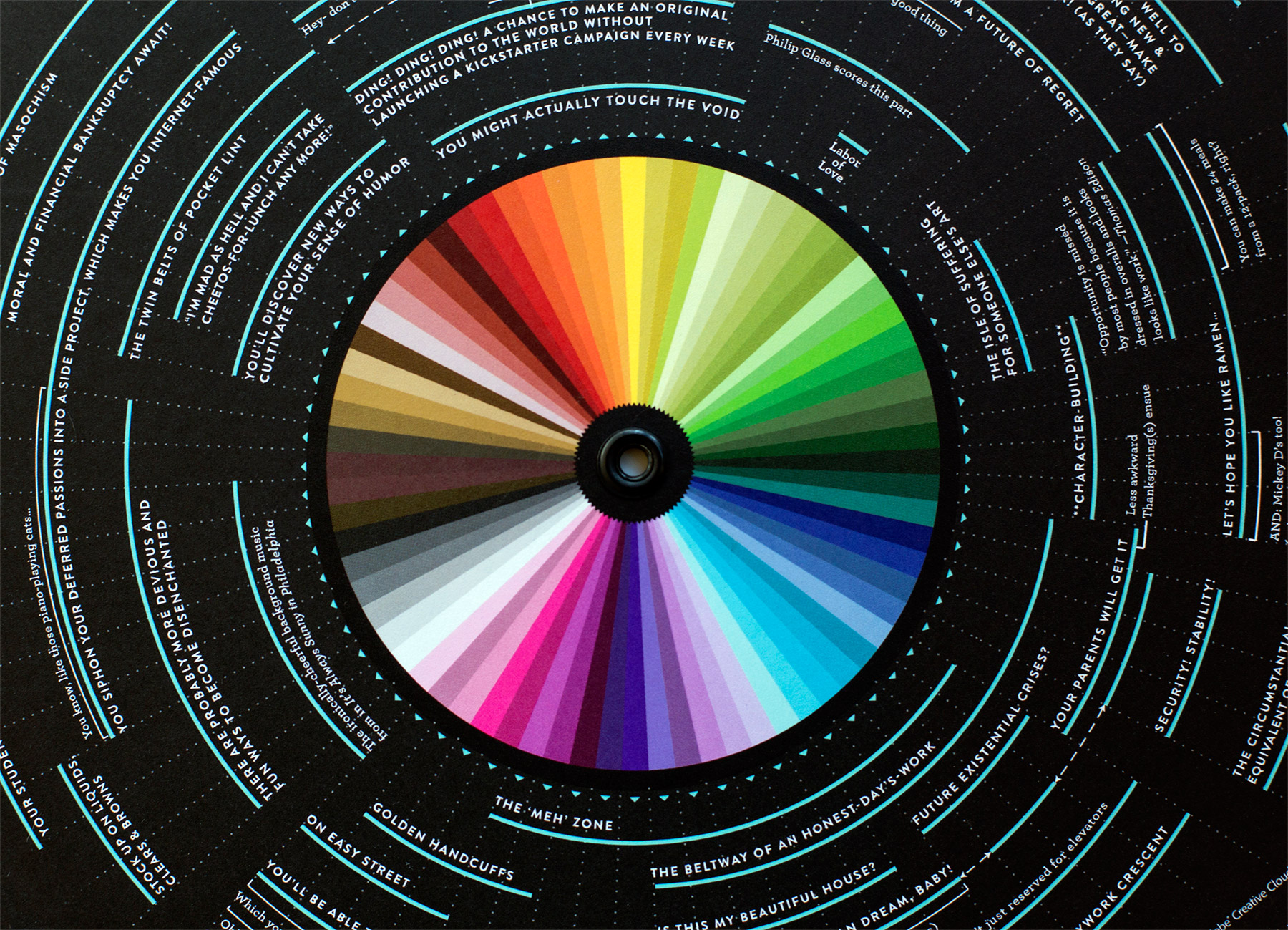 For example, a user will end up in the red/orange spectrum if they report that the job is a good fit, will improve the world in some way, and has decent to good working conditions in relation to the pay. (The red zone is “perfect job” territory—pocked will a few potholes of inadequate compensation, which may or may not be a deal-breaker depending on the user’s situation.)

Within this zone, the fortunes read: “You might actually touch the void,” “Ding, ding, ding! A chance to make an original contribution to the world without launching a Kickstarter campaign every week,” “Don’t look so smug,” and “Like you’ve entered the Eameses magic studio (minus the actual Eameses / plus computers and takeout.” (Everyone gets teased equally in the fortunes, even when the potential job is perfect.) 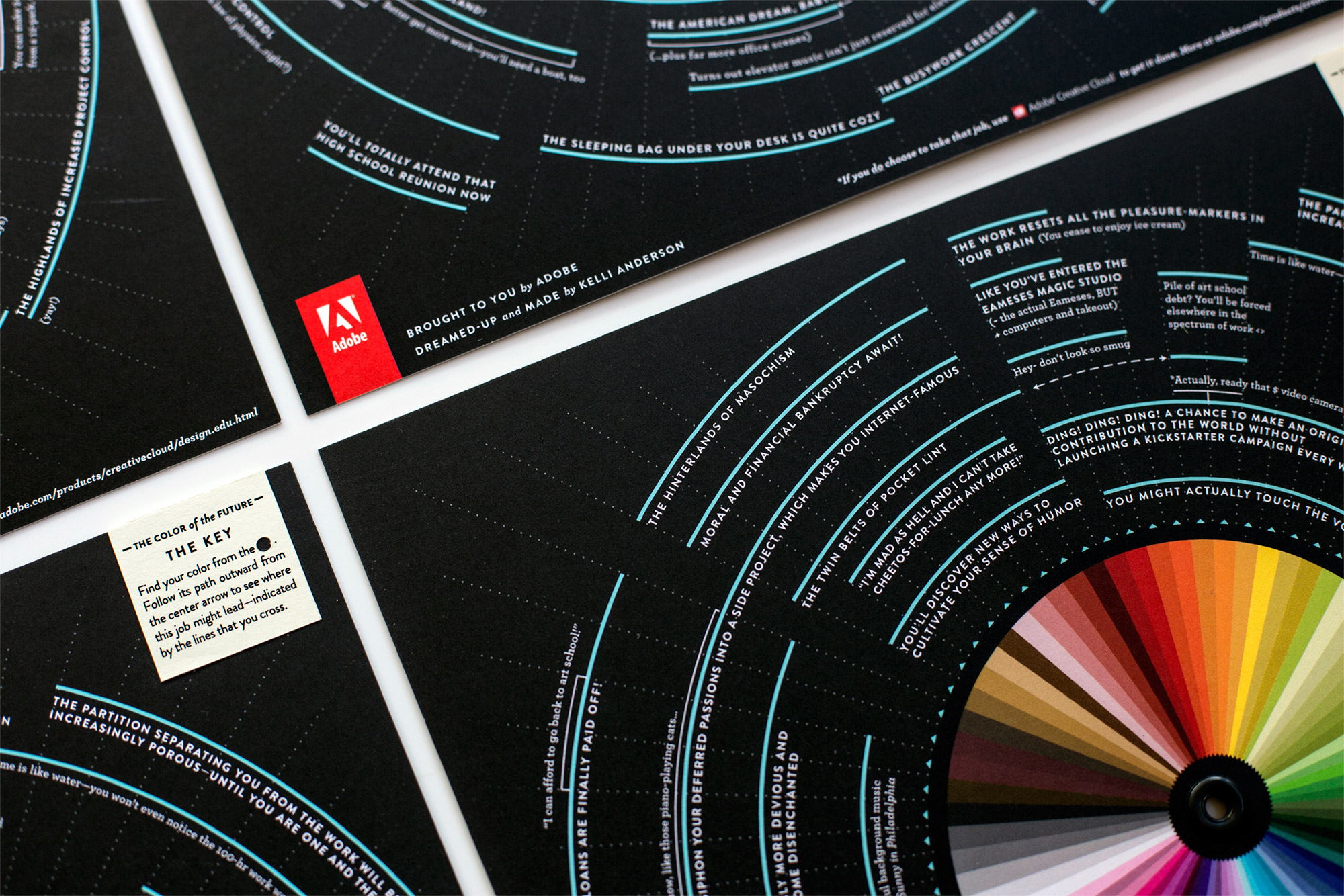 Moving clockwise to the bottom portion of the wheel, we arrive at the “honest day’s work” zone—where the work will not necessarily “improve anything”, but is not harmful and pays decently. The user is told that “Your parents will totally get it!,” and that they will have “Security! Stability!” However, if they said that the work was a bad fit, they end up in this area of doubt: “Future Existential Crises” and “Is this my beautiful house??” 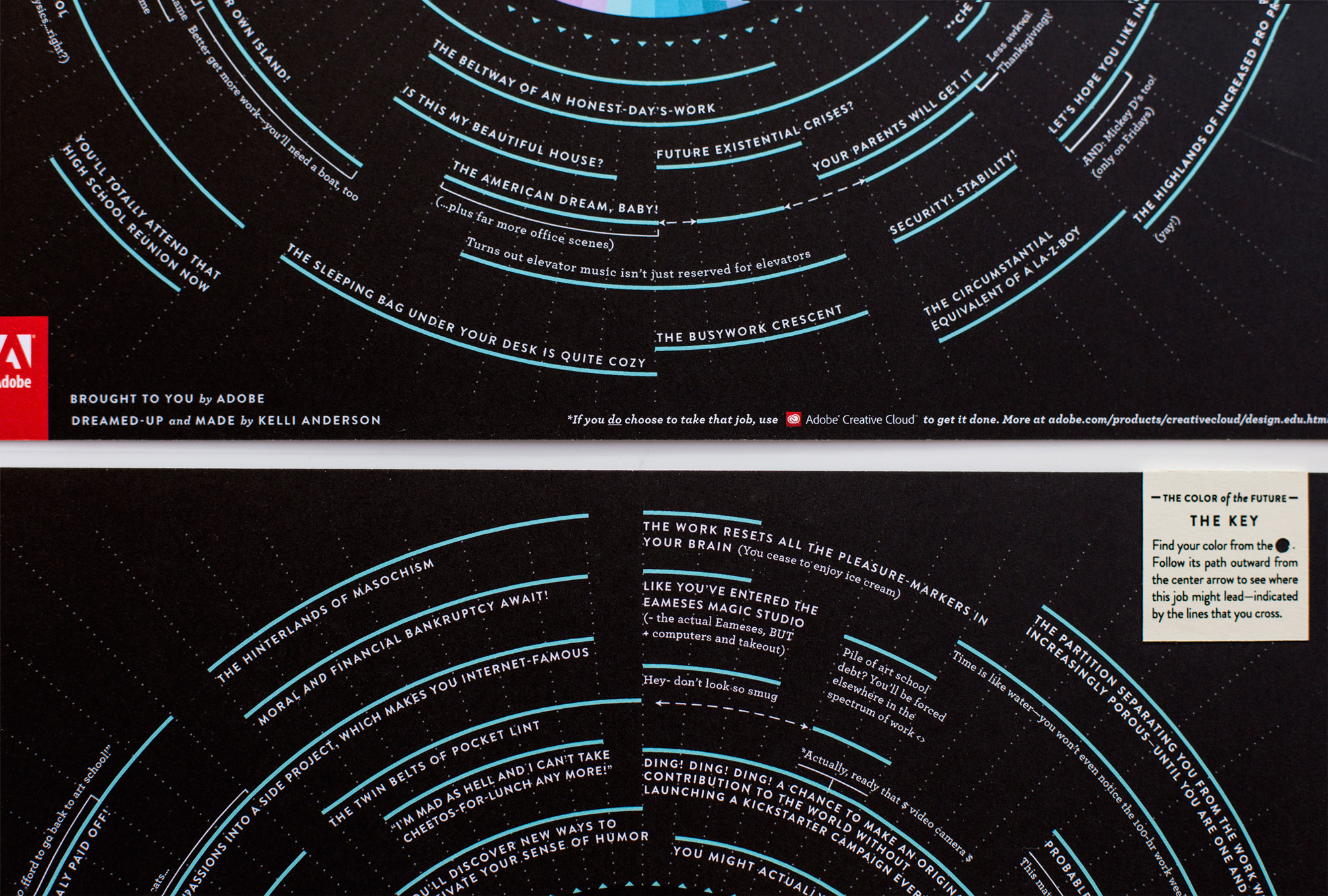 The purple and pink area of the wheel is reserved for jobs that have harmful externalities, but are very well-paying: “You’ll be able to buy your own island!”/”Which you’ll need to hide your shame.” The brown to mauve zone is the terrible zone—the work has harmful externalities, doesn’t pay well, working conditions are bad… the upside is that “You’ll discover new ways to cultivate your sense of humor.”

This project takes direct inspiration from Joseph Weizenbaum’s ELIZA, a computer program which simulates a conversation with a therapist. While it was invented back in the 60’s at the MIT Media Lab, it has not yet lost its uncomfortable hilarity: The back-and-forth between human and machine can transpire for a while until there is some [clearly non-human] glitch in the conversation, and the user finally realizes that they are NOT actually speaking with a therapist, but with an automated computer program. What it makes you realize is that while human beings are the ones programming computers, we too are socially-programmed. We can therefore program machines to understand the structure of this social programming and behave like us. (Like how Siri says, “Yes. Let us hear the Magnetic Fields now!”—simulating human enthusiasm about my album-selection choice, like one of your music-nerd buddies is hanging out in your headphones, making you feel comfortable in that ever-contentious realm of musical taste.)

With the Existential Calculator, I wanted to create a contraption with a similar effect. The user is led to believe that the wheel is calculating *something*, but in reality, it is merely a mirror on their own logic. Like ELIZA, it invites the user to question the premise of the project, the odd fit between technological reasoning and human reasoning, and also the implications of manually converting qualitative-feelings into quantitative-data. The main question it addresses is: If we can agree that human happiness is the goal, what is the best decision-making route to achieve this? Should we rely on our own subjective reasoning when making decisions (even though we lack data about probably future outcomes), or would the cold logic of probability serve us better? I don’t know the answer to this question, but I put my own opinions aside and set out to design the most logical wheel possible, based on what social science says about work and happiness.

I also looked a lot at the visuals in 2001: A Space Odyssey, which is probably most apparent in early structural tests before the final design was layered on: 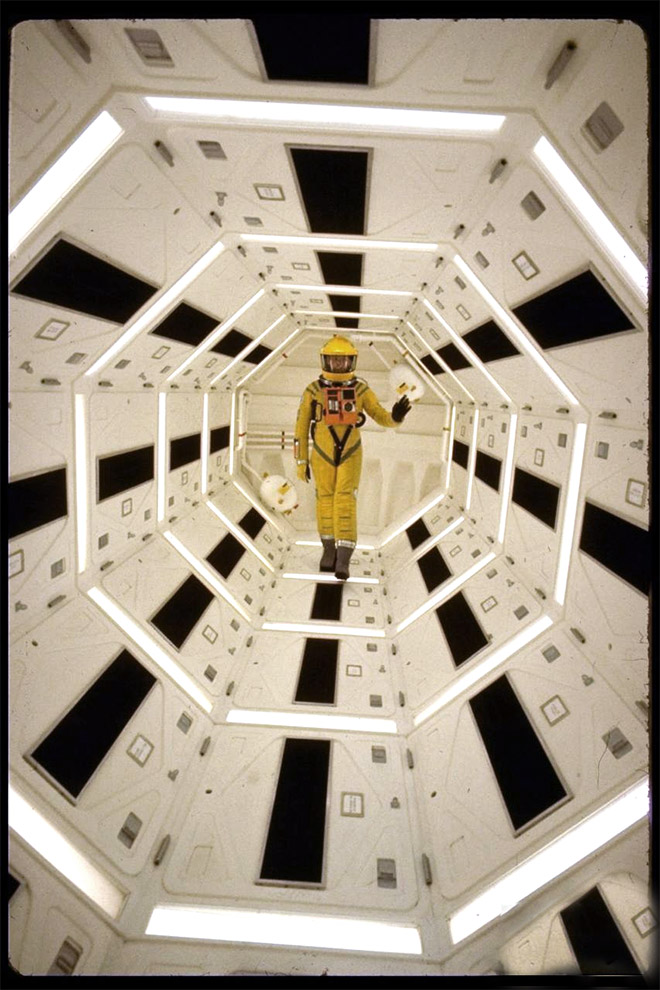 Additional information on the project on FastCo Design.

Also an inspiration to this project is Jessica Hische’s awesome “Work for Free?” flowchart.

Special thanks to Sara Distin, Wendy MacNaughton, and Daniel for helping me think through it! And to everyone who came over and helped me “grommet” the 1200 wheels.

Enjoy solving your personal problems via inappropriately technical means? Pick one up at Adobe’s booth at the National AIGA conference.

36 Responses to “The Existential Calculator (Take that job?)”