I’ve been thinking a lot about how dreams blend into waking life for a music video—a project that felt like a bit of a dream itself. If “sentiment without action is the ruin of the soul” (as environmentalist Edward Abbey once remarked), being a designer may provide lifelong cover from such an affliction. The practice of making-communicative-things turns out to be both a productive and socially-acceptable place to put one’s enthusiasm. Aaron Draplin has remarked upon the secret power in this: through the work itself, design can be an effective advocacy tool. You can make your friend’s band/cause/bake sale seem more legit+smart than the other, perhaps better-funded guy’s (and maybe even nudge the orbit of outcomes in some tiny way.)

When you are really into your friend’s bake sale, this is simply the best thing ever. But the problem lies in the logistics—amid all of the clutter, dumb jobs, and nightmare clients— how do you end up working for the exact ideas, entities, and causes that bring you joy, rather than the dreaded “man”?

In this case, the answer defying all statistical likelihood was simply: knowing-Melissa-Jun. We’ve worked together through Tinybop (Human Body), and she provided John Flansburgh of the band They Might Be Giants my contact information. This led to one of my more memorable gmail experiences, when I replied to John’s initial inquiry (after pacing / omitting at least 90% of its fan-dorkness contents.) He wanted a music video. This would be video #50 for a revival of the band’s beloved-and-perplexing Dial-a-Song service. Watch some of the other videos here.

This band has kept a little corner of rock music weird for over 30 years. And, they are very charming (exhibit A: this Design Matters interview) but through no fault of their own, their appeal for me is bizarrely personal. I rarely talk to strangers, and yet, I’ve met some of my favorite people in the world at They Might Be Giants’ concerts. Chief among them, I met my other half (and sometimes-collaborator, particularly on videos) of 14 years, Daniel Dunnam, while leaning against the National Polish Home while awaiting admission to a documentary filming for the band. Longtime friendships with other favorites (including Karen, for whom I made the paper record player thing) were formed in this same unlikeliest of ways. I would be well on my way to dying alone and having no friends if it weren’t for this band. I owe them.

Together, Daniel and I did the only thing there was to do. We jumped up and down in excitement and then put sleep on hold for a month make a music video with singing cereal boxes and Greek mythology by hand.

The blending of sleep and dream, personifying inanimate objects, English IV literary characters, references to early downtown NYC performance art, and giant orange hands are all themes embedded in the band’s rich visual oeuvre. The song itself is accurately described by John F. as abundantly “noun-y.” So even though the band was respectably hands-off about sending us direction, we took our cues directly from the song itself — many of the scenes simply had to illustrate the lyrics however abstractly. 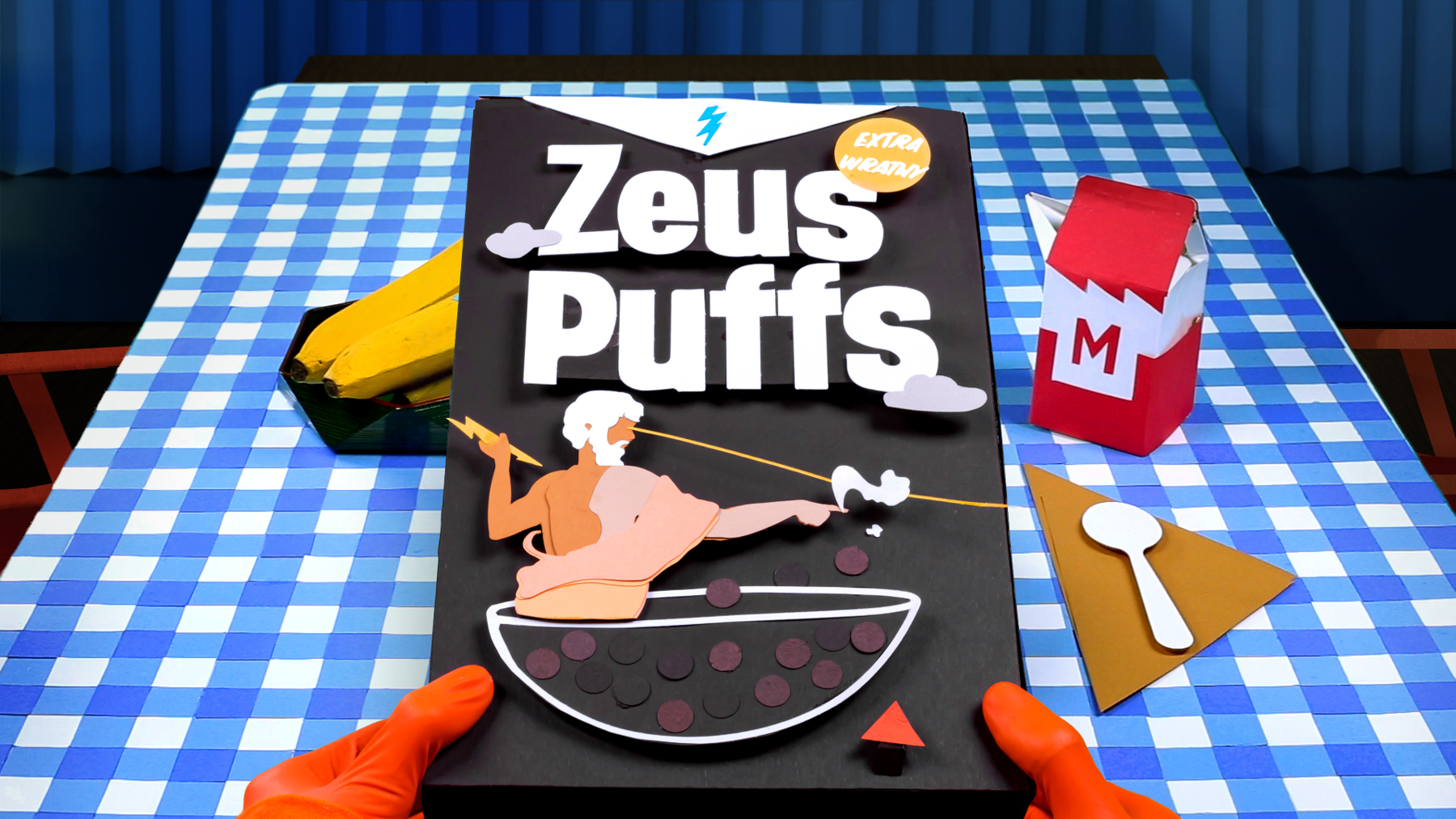 So the creative challenge was truly to depict a level of extreme surreality in a way that keeps the viewer moving along with us, deeper into weirdness, rather than totally losing/alienating them. Daniel and I decided that the way to maintain a tether to “consensus real” was to preserve a sense of touch-ability — a link to physical empathy was secured by using close-range, relatable physical materials like paper and string. We would create a little shoebox diorama world like we did in a past collaboration, Plants.

Here is the specific proposal that we sent to John F.:

Basically: We are proposing a surrealist stop-motion video culminating in Busby-Berkeley-esque dance numbers performed by breakfast cereal. (This all kinda makes sense…promise… read on!)

The “read” that the video takes on the song: Confusing wake/sleep and dream/reality. We want to create a highly-relatable type of surrealism where familiar/boring/everyday habits are defamiliarized in a playful, whimsical way. We’ll blur the line (plot-wise) between dreaming and a post-dreaming activities—namely eating breakfast. So breakfast, which is normally comforting and familiar, gets strange. Each time things seem to be going as expected, there is some sort of fantastical twist showing that the laws of physics are no longer in play (similar to that point in dream where you realize: “oh… I must still be asleep.”) 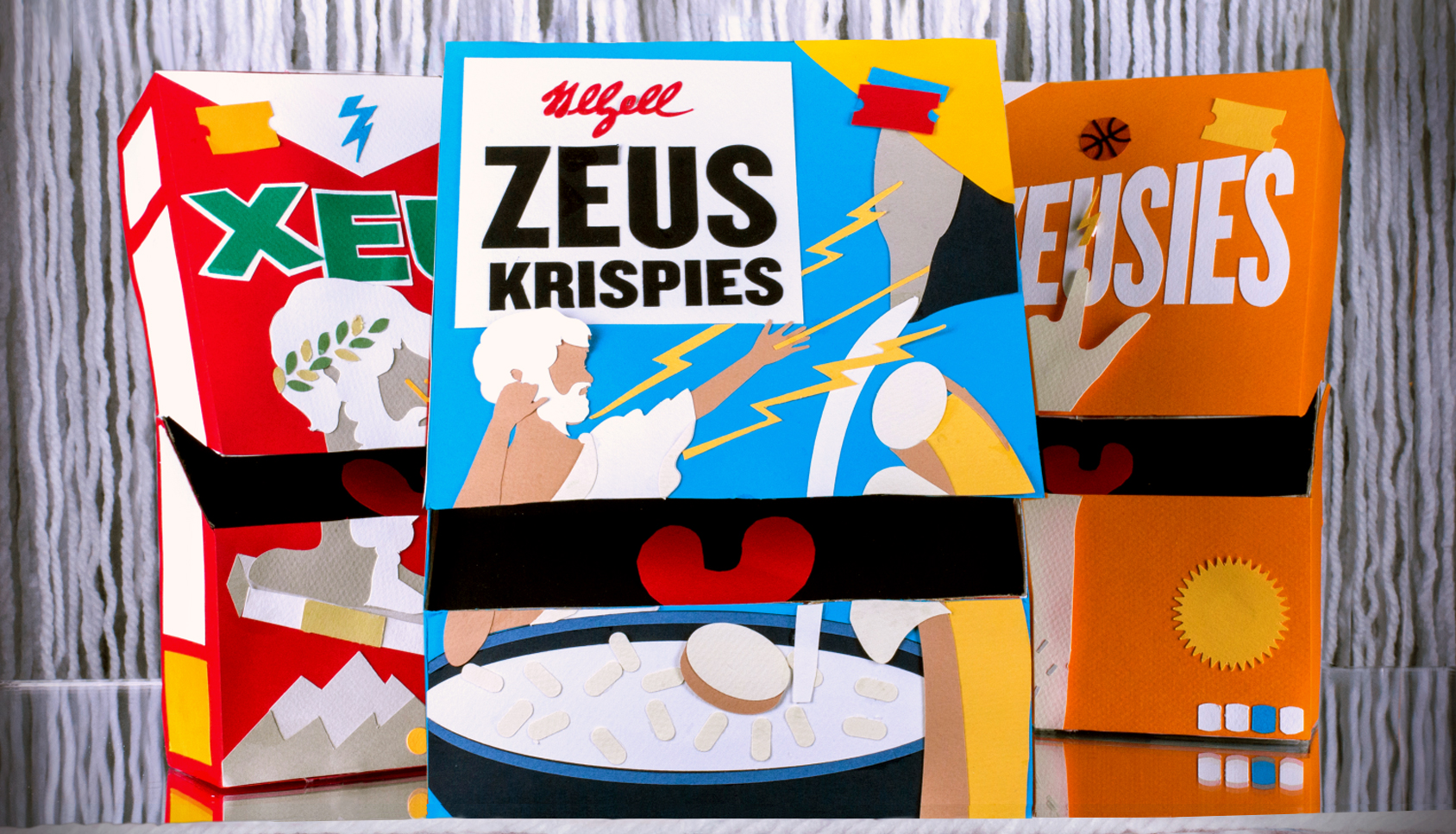 Here is how it came together:

The moral of the story: sleep-eating = bad news.

I used glue and paper and made the props. (On principle, Daniel doesn’t touch glue. So that is the division of labor here.) 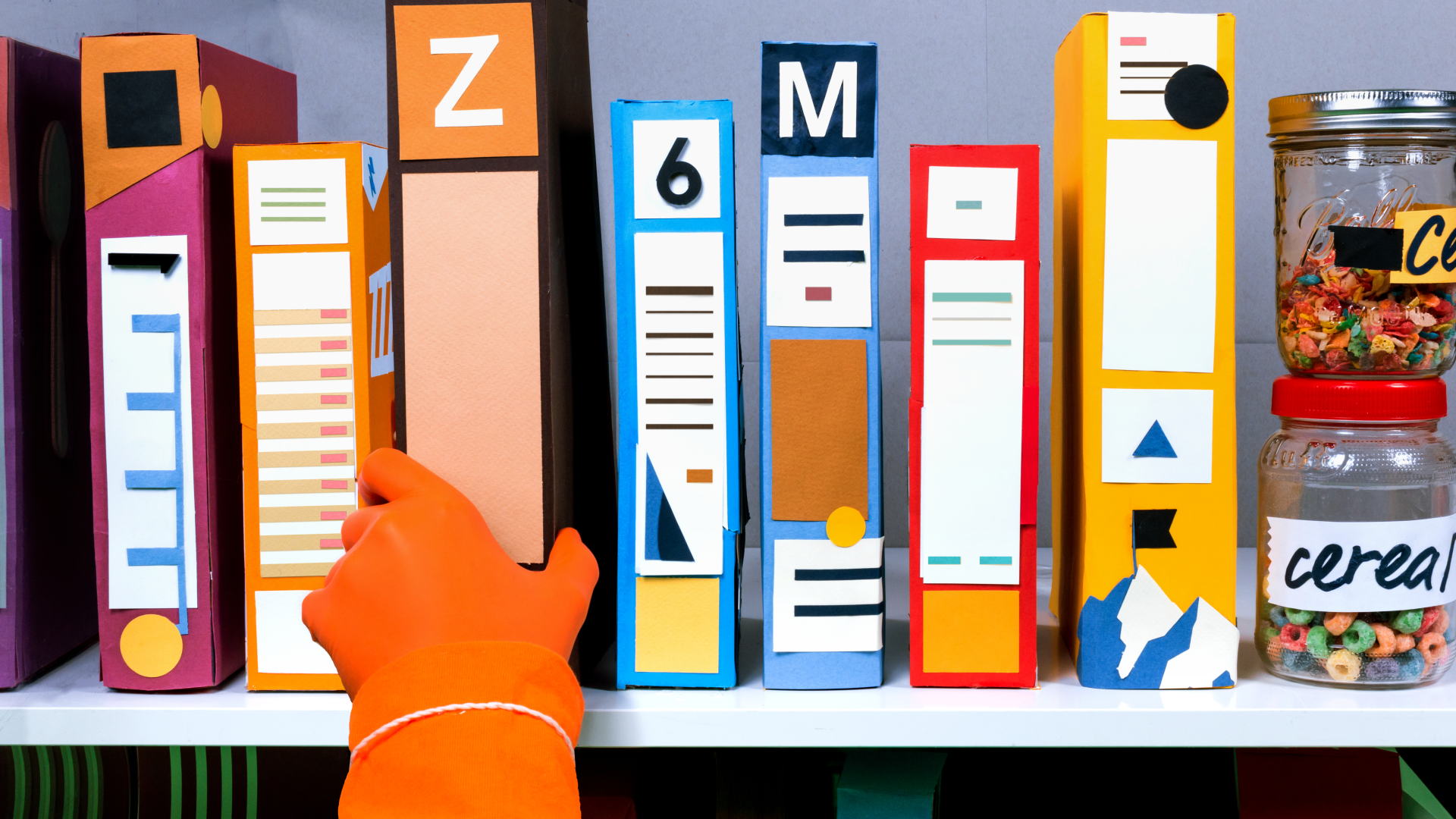 More complex designs were cut on a Craft Robo. This shows the version of the main character’s sleep-inducing literature drawn first in Illustrator and then output to the cutter: 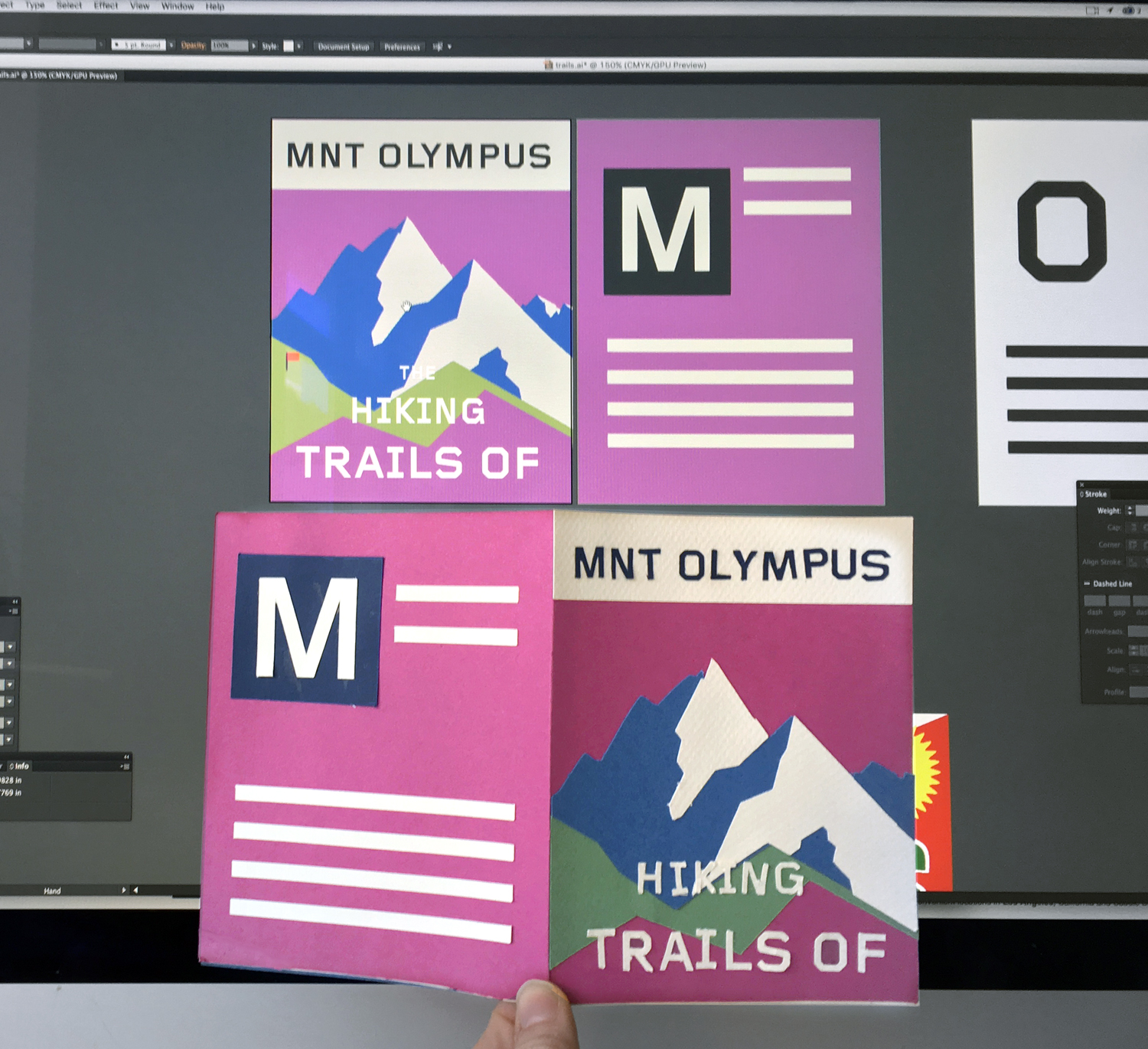 Several scenes could be executed using straight stop-motion animation. However, most required complex compositing. For example, I made a giant 20 foot long grocery store floor out of paper in our apartment. After shooting the whole thing, it was quite disappointing that this strategy did not work (the timing was too inflexible to be properly syncopated to the song.) So I recreated my paper floor in Photoshop and Daniel tastefully composited it in—and, alas!: I was initially skeptical, but it is, indeed, very grocery-store-floor-y! 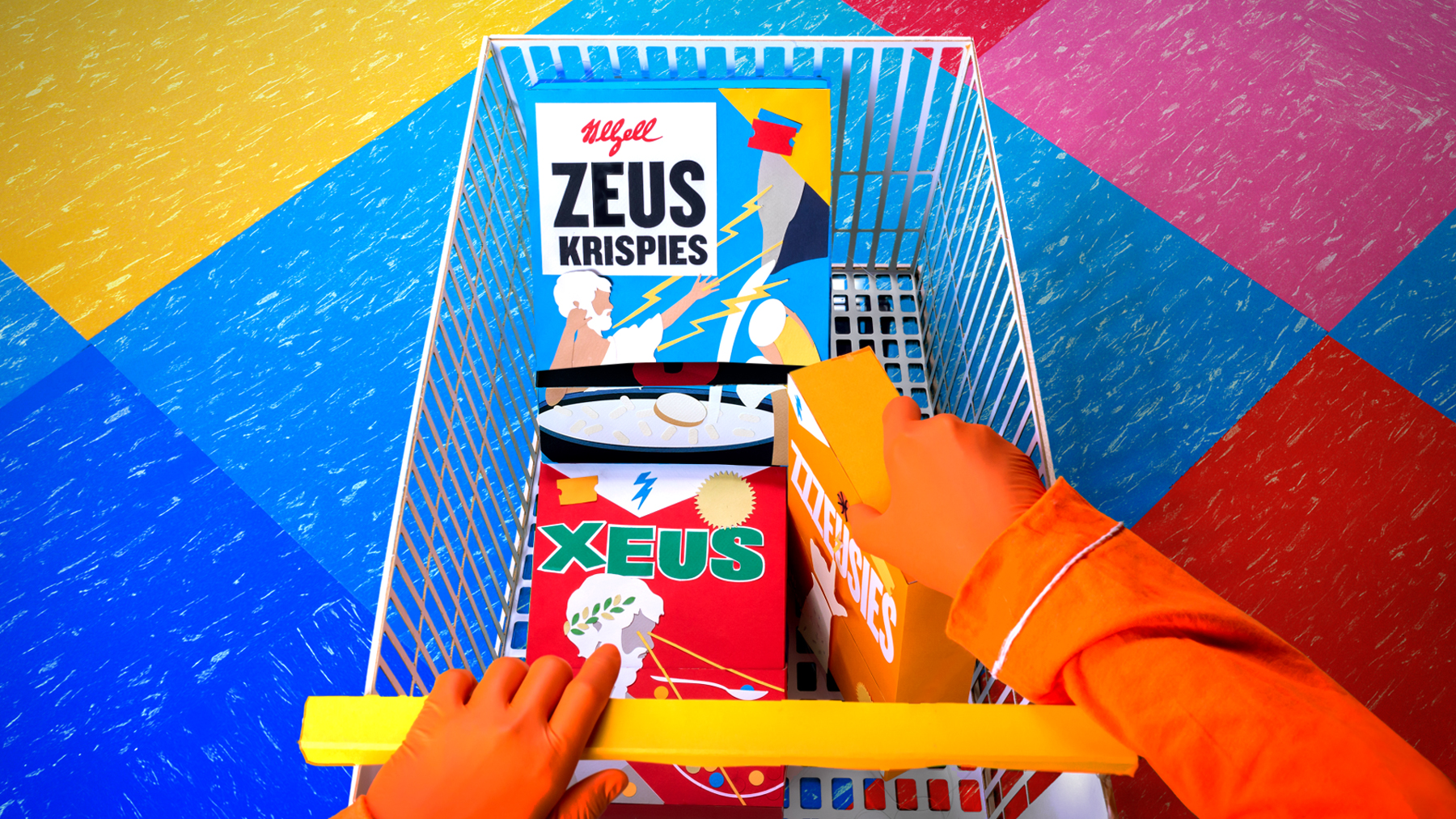 For the boats, we had to shoot/animate each little boat on a greenscreen background, then shoot the background (maintaining the same exact angle) and then Daniel finally composited it together using After Effects. Note: green screen keying doesn’t work so well with teeny-tiny objects, as they pick up a color cast from the green. So I ended up having to cutting the background out of each frame of each boat. Not fun.

When capturing everything, we used this helpful-but-also-frustrating software called Dragonframe that allows you to load in sound and onionskin frames while shooting. We were grateful to have it on-hand to annunciate the words uttered by our singing cereal boxes, which were expertly puppeted by Daniel and Alina Melnikova.

And to sleep. For real this time.

Was so excited to work on this very full-circle project!

Thanks to the Johns for giving us this opportunity, Adobe Creative Residency for giving me the leisure of time to work on it without economic worry, Melissa Jun, Alina Melnikova, After Effects genius (no exaggeration!) Sander van Djik, for coaching us in multiple (incredibly-valuable) hours-long training sessions (AND inviting us to Thanksgiving dinner! We love you!), and Andrew Dean, Jonas Moody, and Sam Potts for super-helpful feedback and suggestions. And thanks to Daniel, of course, for making this possible. And for putting up with me… And the mess…For 14 years!

2 Responses to “A Music Video for They Might Be Giants”