My first gallery show, Around & Around

In light of current circumstances, 75% of proceeds (more if I can swing it) from the show and online sales will go to organizations. (Split between the Southern Poverty Law Center, 350.org, and CIEL climate science defense.) 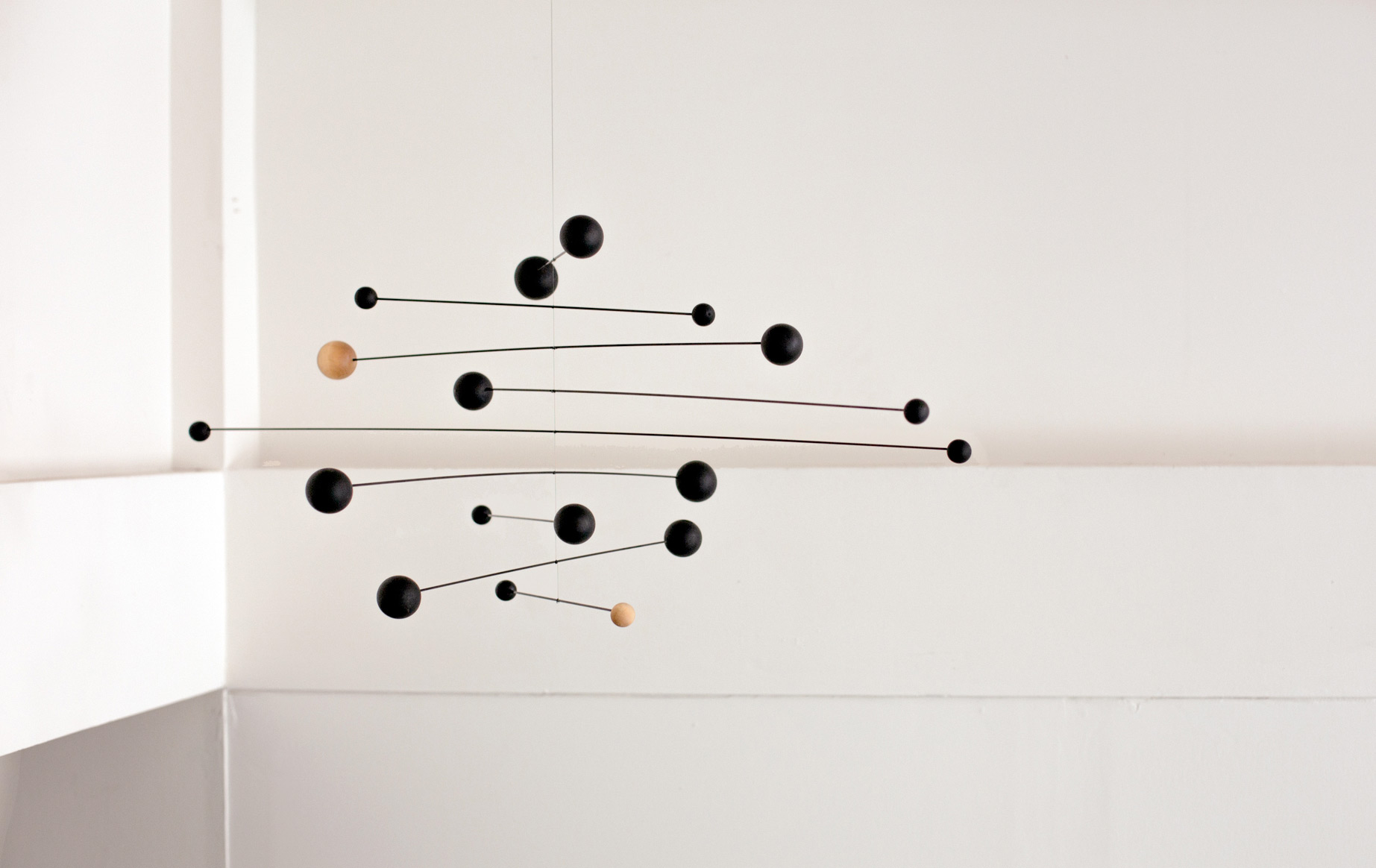 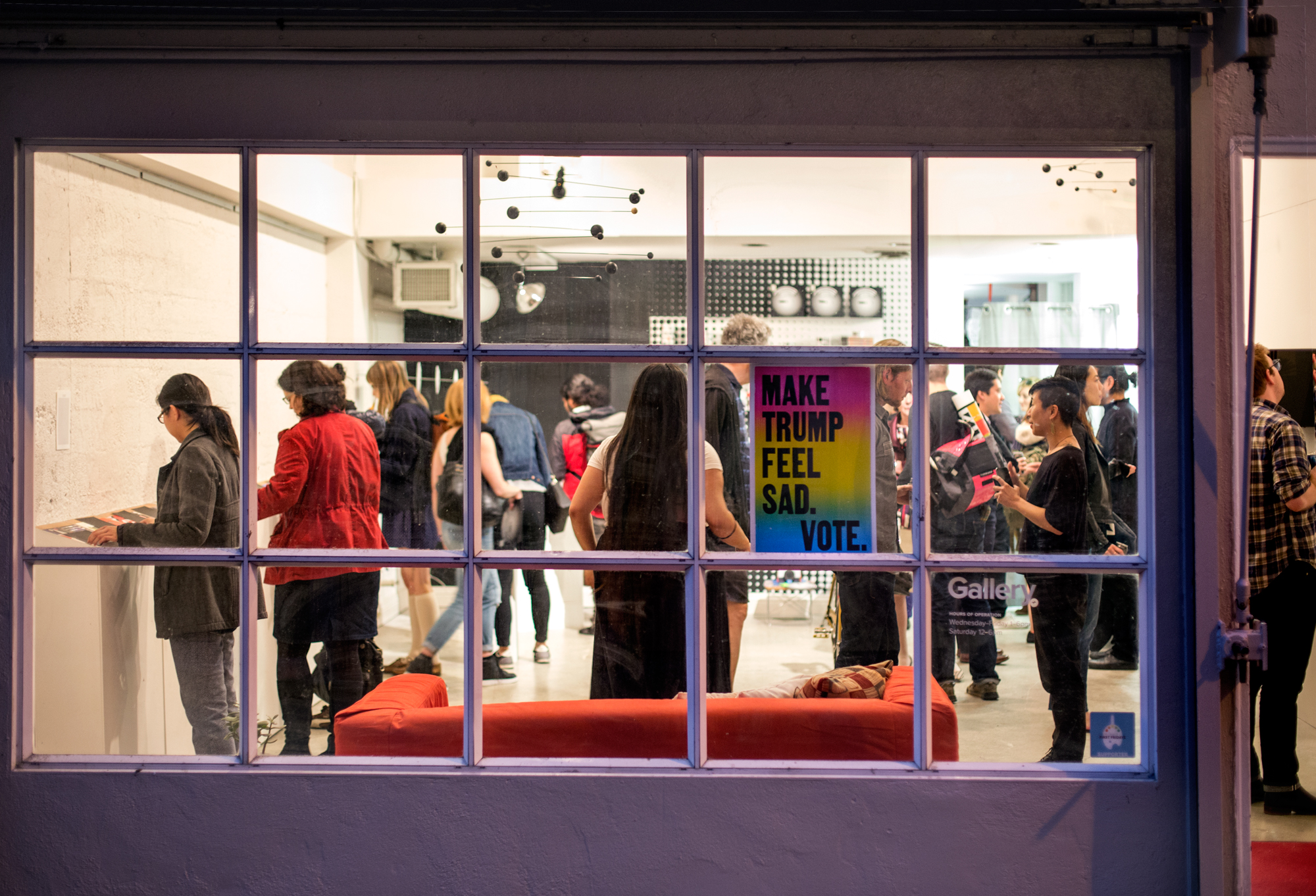 ^
My first gallery show opened! …four days before the election. (So, basically: by day five, the whole experience felt like it lived in a surreal time-capsule.)

The show’s basic premise is that firsthand encounters have the power to contradict preconceived notions. When you walk in the door, paper objects play music, reveal animation, tabulate math-logic—and [modestly] expand the sense of possibility around a material that is crumpled up and discarded as trash countless times a day.

Now impossible for me not to consider these preconceived notions more broadly—in shadow of the election, they seem an impenetrable barrier to attaining a consensus reality. So (just putting this out there): could demonstration also work as a tactic to challenge political preconceived notions? Since seeing is [actually] believing for most people, it seems like showing-rather-than-telling may be one way of making facts visceral/consensus in this weird post-fact world. (in the name of getting us all an inch closer to a single reality?)

I know, I know (“I’m not just the president of the hair club for men, I’m also a client”)– but hear me out: The most compelling activism actions always demonstrate (they convince by way of firsthand interactions with systems, in the grit of real life, and play out like experiments.) Like: Spy Magazine’s shaming of the greedy rich, Strike Debt’s hack of the debt trading system, many of the Yes Men’s actions…and there’s more on actipedia. Such a strategy would also have the happy side effect of keeping us in check too—and away from indemonstrable dogma or models that don’t-play-out-in-reality. (FFS, we need more windows) [Thinking…] 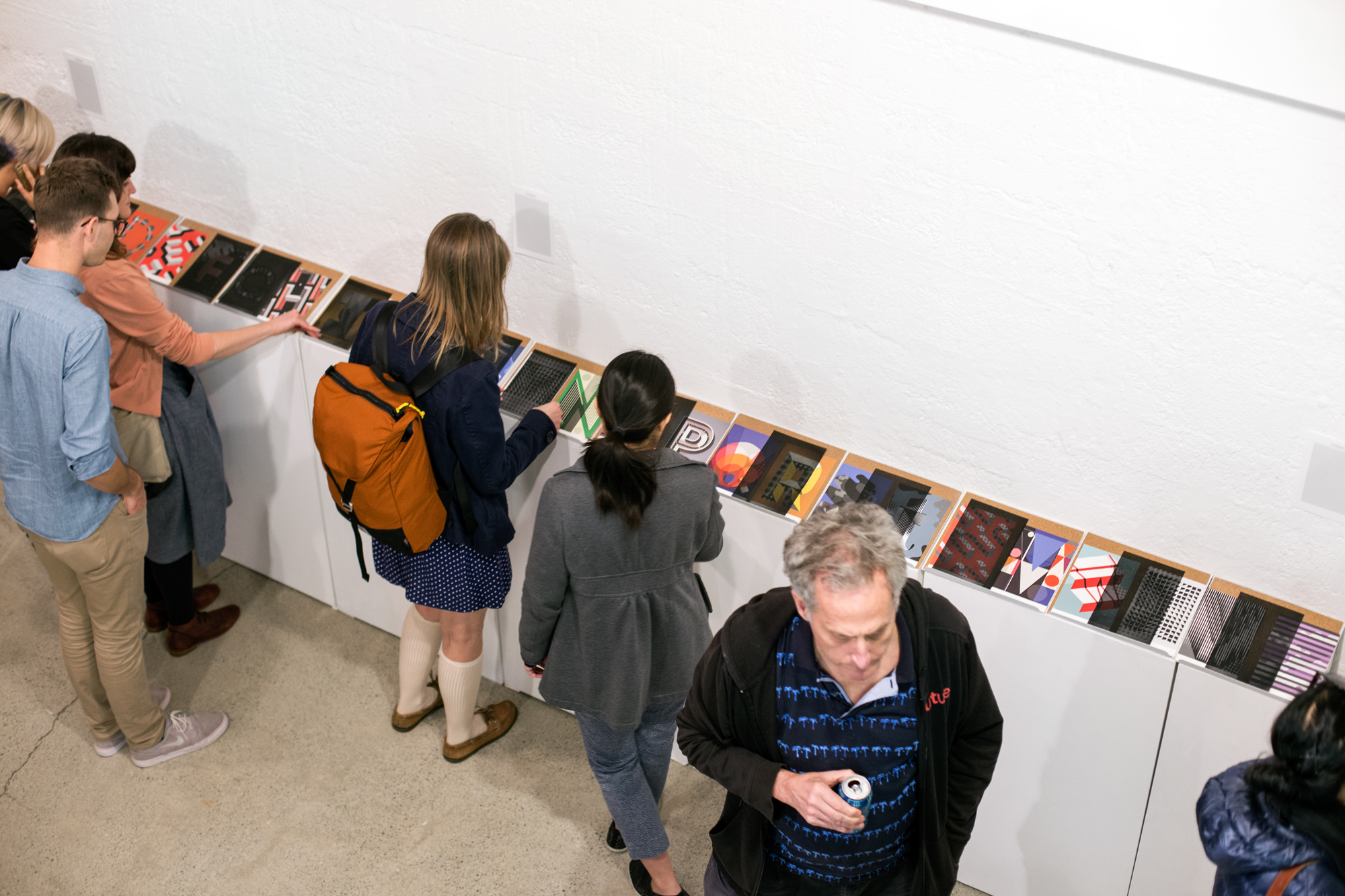 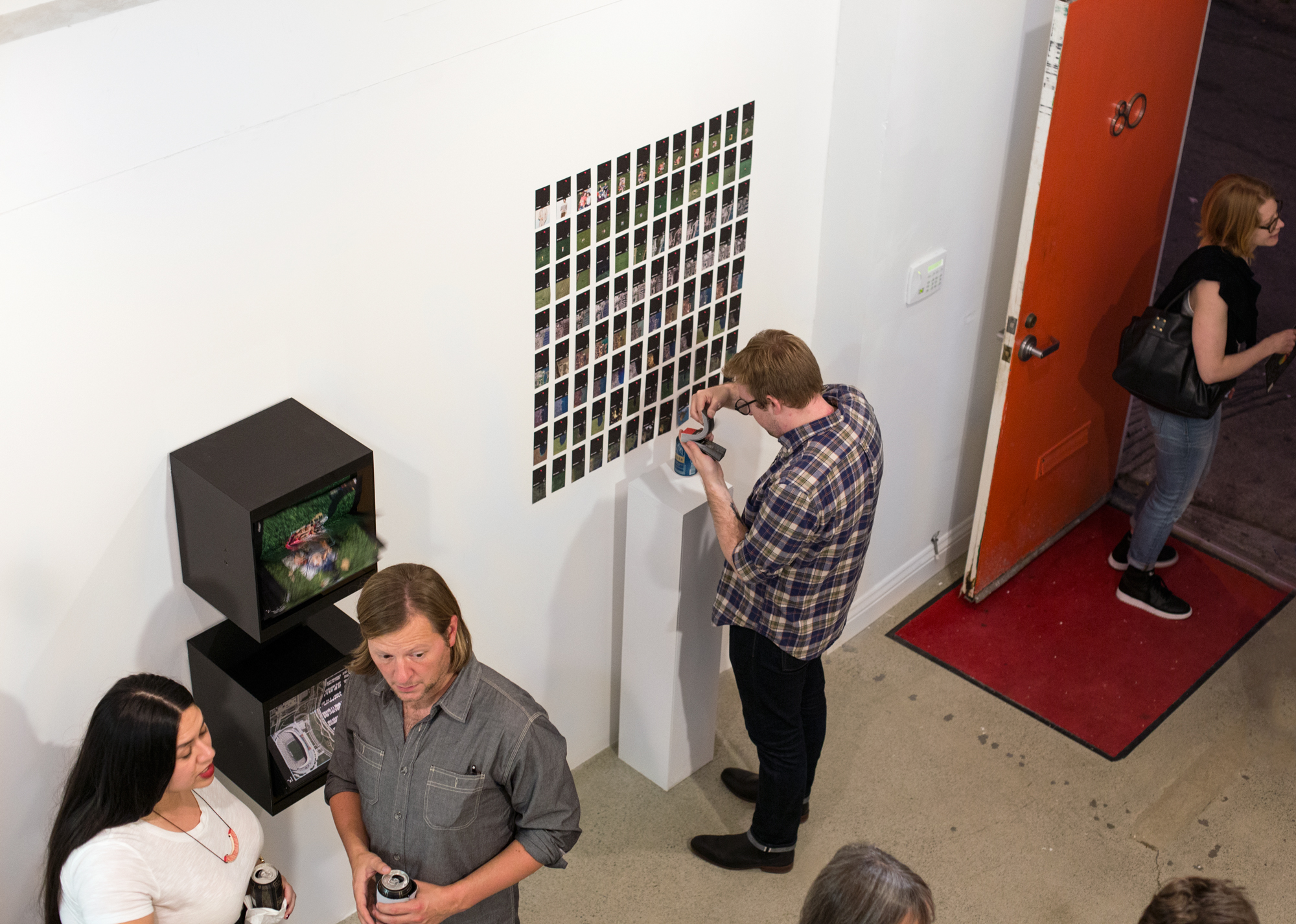 All of the ideas are stated in physical terms (you’re actually supposed to turn, spin, and twirl all the pieces.) Just so no one feels awkward about poking things, this is urged—all official-like—in the gallery guide/wall text: 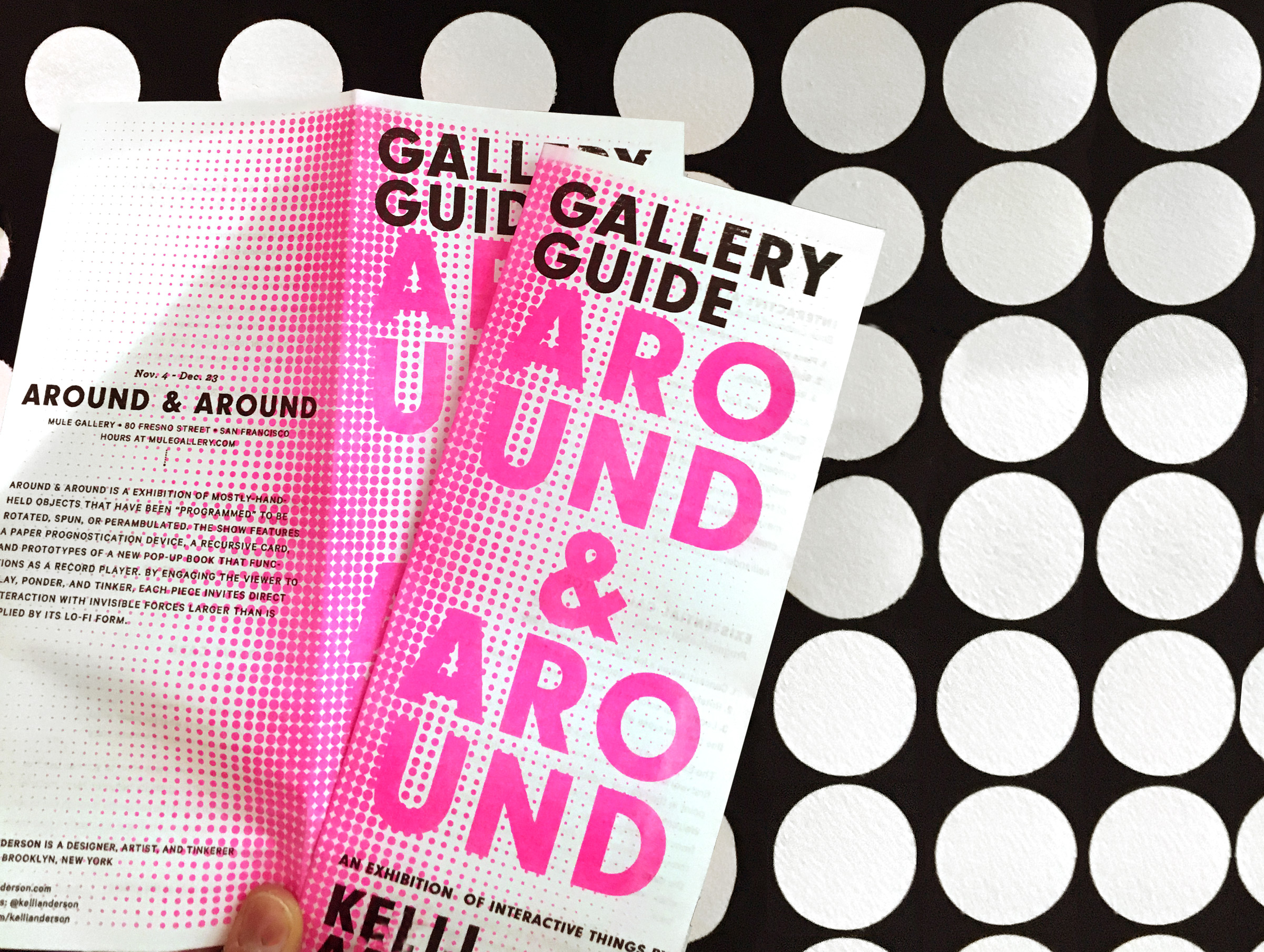 *Thanks ^ to Megan Lotter for showing me how to RISO on Guts & Glory’s machine!

Paper “tech” represents here in force: paper that amplifies sound, paper that magnifies shapes, and paper that predicts the future (through logic, really). The show even includes a prototype of a new(!) pop-up book/gadget that many people have been requesting for years now (…not ready to share online yet, but its there, go see it and I’ll gladly put your feedback to good use.)

With the help of a few friends, I built plinths and learned from youtube how to build a wall. Mobiles of carbon fiber and wood turn slowly overhead (in a precarious balance I achieved by layering of black paint ad infinitum). 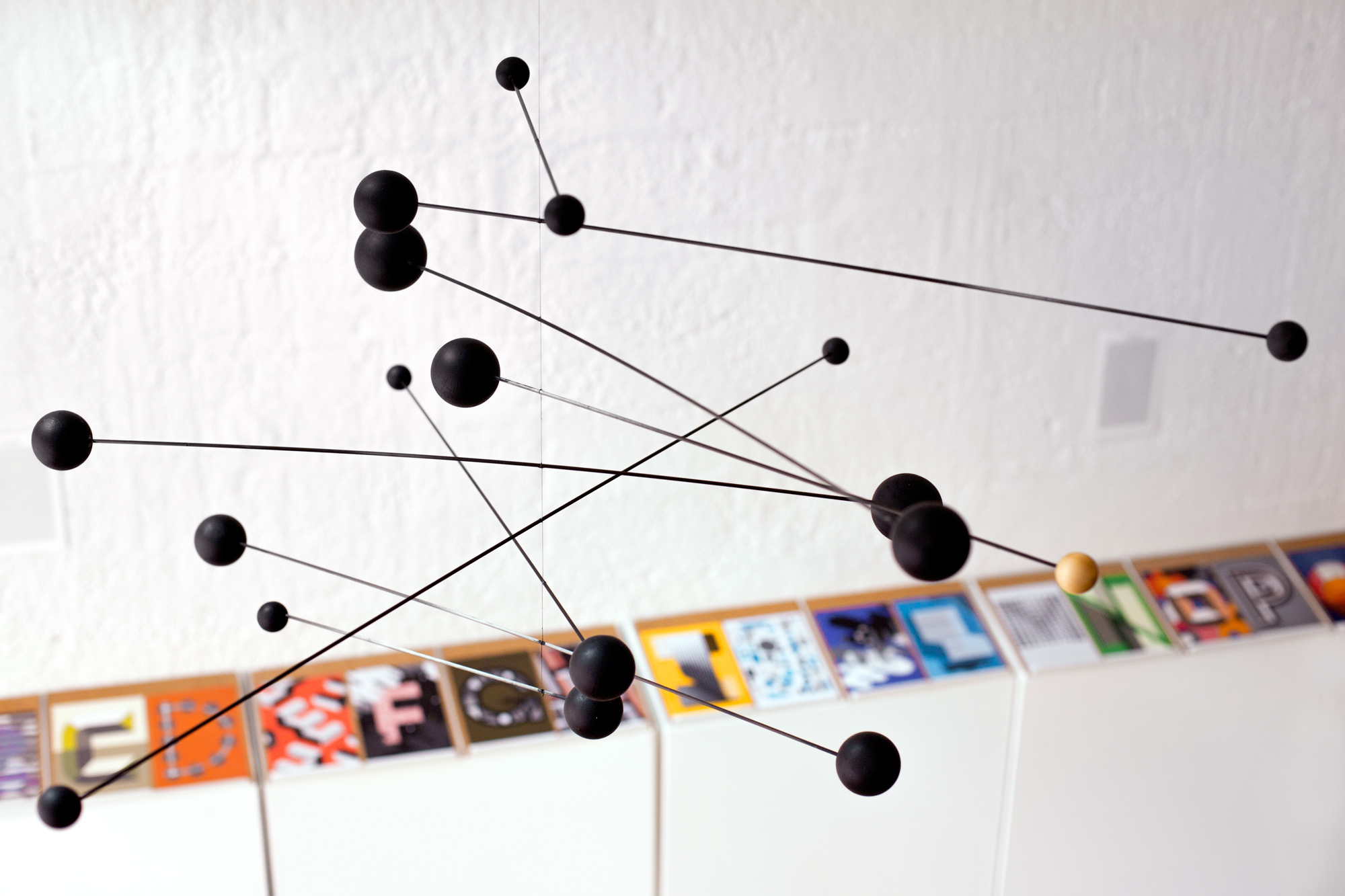 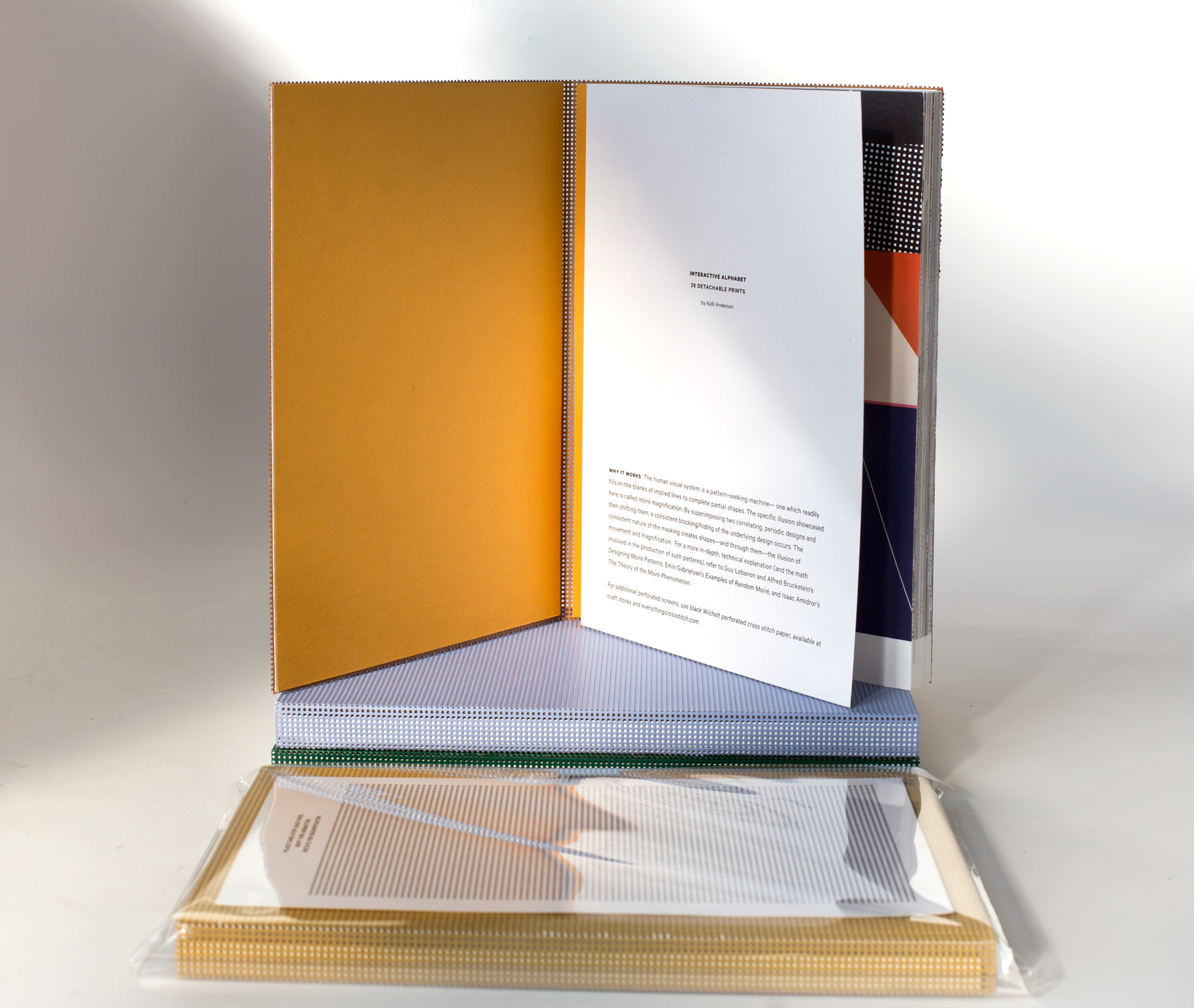 This one is an old adversary turned co-conspirator…

Before being adopted by the design world, I worked part-time digitizing the glass plate negative collection at the American Museum of Natural History‘s library (which, yep: that’s just as Wes-Anderson-y as it sounds.) Because of this, I became the wielder of a wide variety of anti-Newton Ring glass, sprays, and liquid products. A Newton ring is a type of interference moiré pattern that occurs when film touches glass. (You’ve probably encountered this before.) 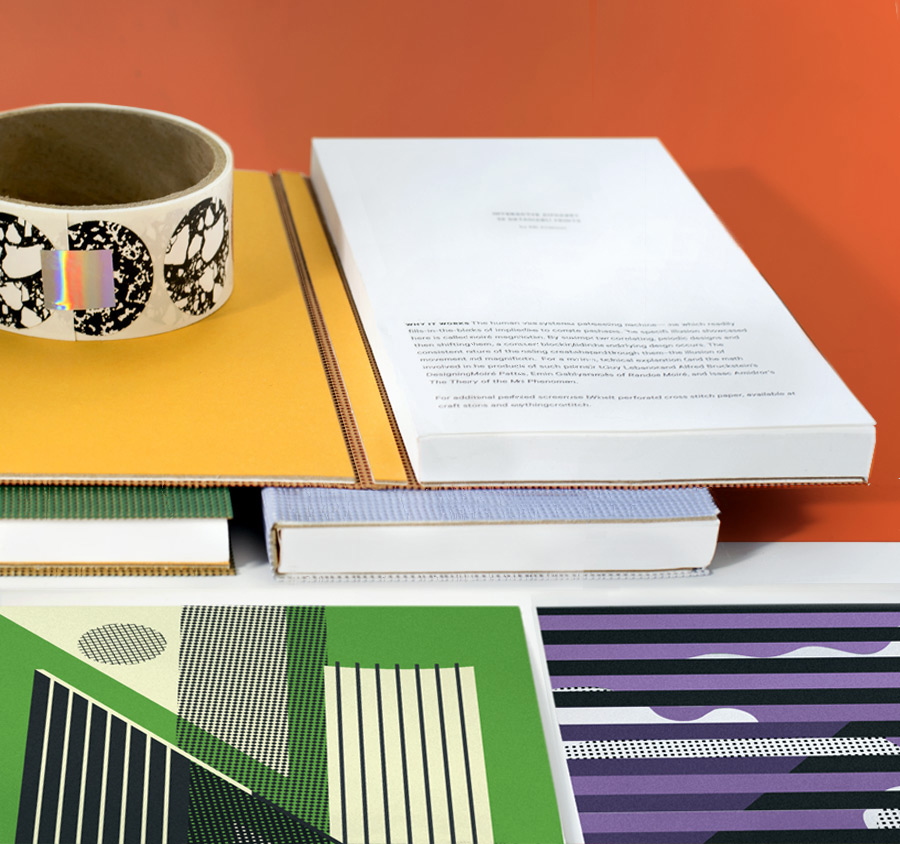 Since stomping-out moiré was basically the bane of my existence for years, you can imagine the retributive delight I experienced when I stumbled upon Swiss scientist, Emin Gabrielyan’s work. Gabrielyan—as well as Isaac Amidror—research the behavior and practical applications of moiré. (Practical applications, you ask? YES. Using moiré, they are developing new types of optical indicators for tiny measurement devices.)

This is the demonstration gif from Gabrielyan’s site that first blew my mind:

What you are seeing is an arrangement of numbers and a screen which has been perforated in that same exact formation. When it is rotated, it appears to magnify the tiny, ant-like numbers. (If you’re curious, what you are seeing here are 5777 number 2s and 5777 matching holes in a screen of paper. (Plus, rotation!): 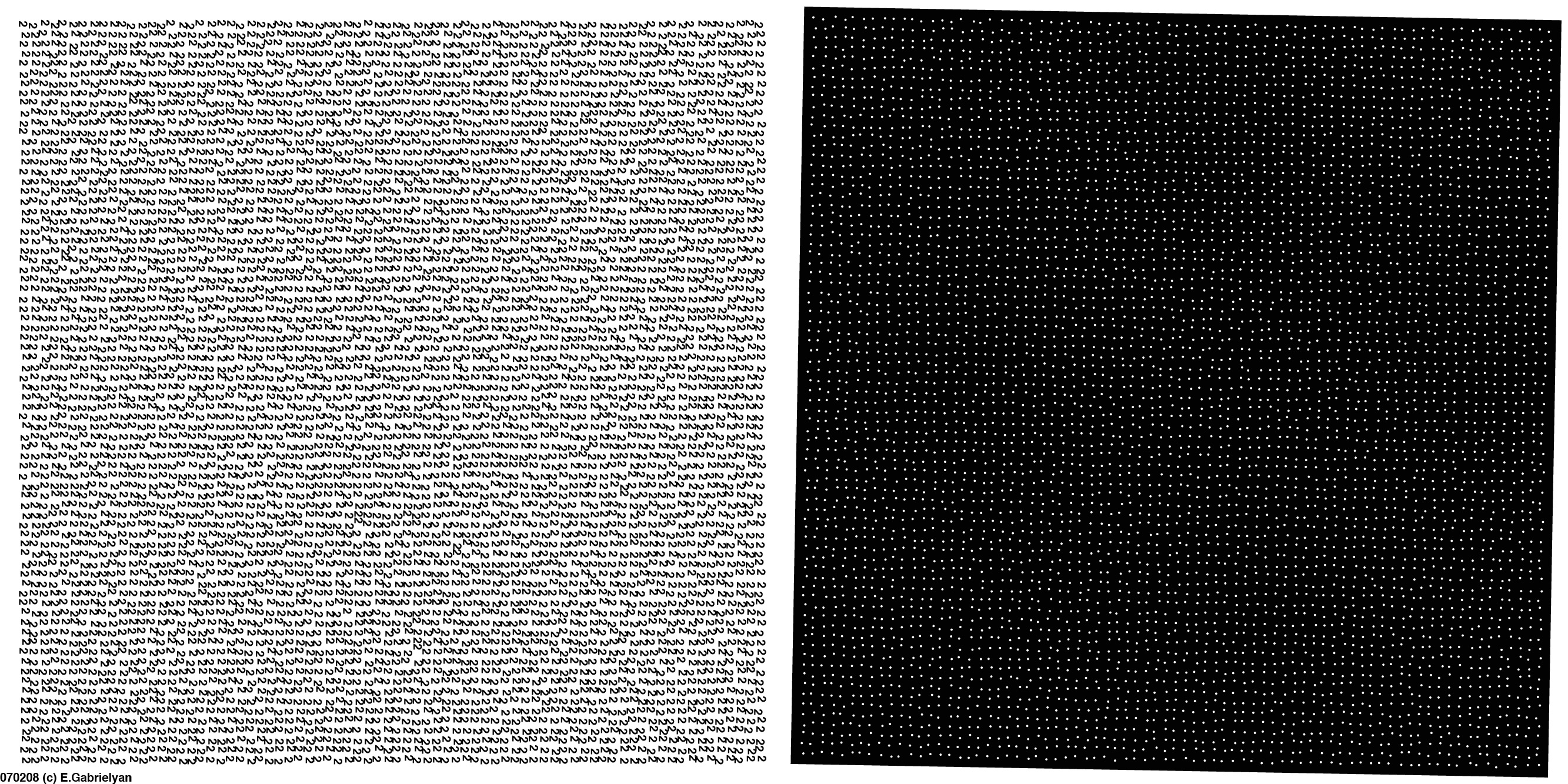 Rapt with excitement over this bizarre behavior, I began playing with screens+simple shapes (in correlating gridded patterns) to see if I could make this former foe dance. I found that by rotating my printed grids at varying angles, pleasing invisible boundaries formed:

I fretted over what to do with this technique for a good long while, but I knew I wanted a project with enough latitude to explore wildly different arrangements, colors, and compositions.

I eventually decided to make a “moire magnification” character for each letter of the alphabet in 26 different styles (a homage to specific artists and designers I admire). As maiden effort, I produced a small edition of 100 handmade books to start feeling out this technique. So: more to come…

Why does this work?
I’m not gonna pretend that I truly understand everything, but this much I know is true: The fundamental reason that you witness a “2”—or a square—growing larger (when there is actually no “2”—or square—growing larger) has to do with the brain’s subconscious pattern-recognition tendencies. Imagine you spy a silhouette in the distance—obscured by rain, fog, trees, or any-number-of-foregrounded-things. You understand the shape anyway because your mind knows what is supposed to be there and fills in the blocked parts. 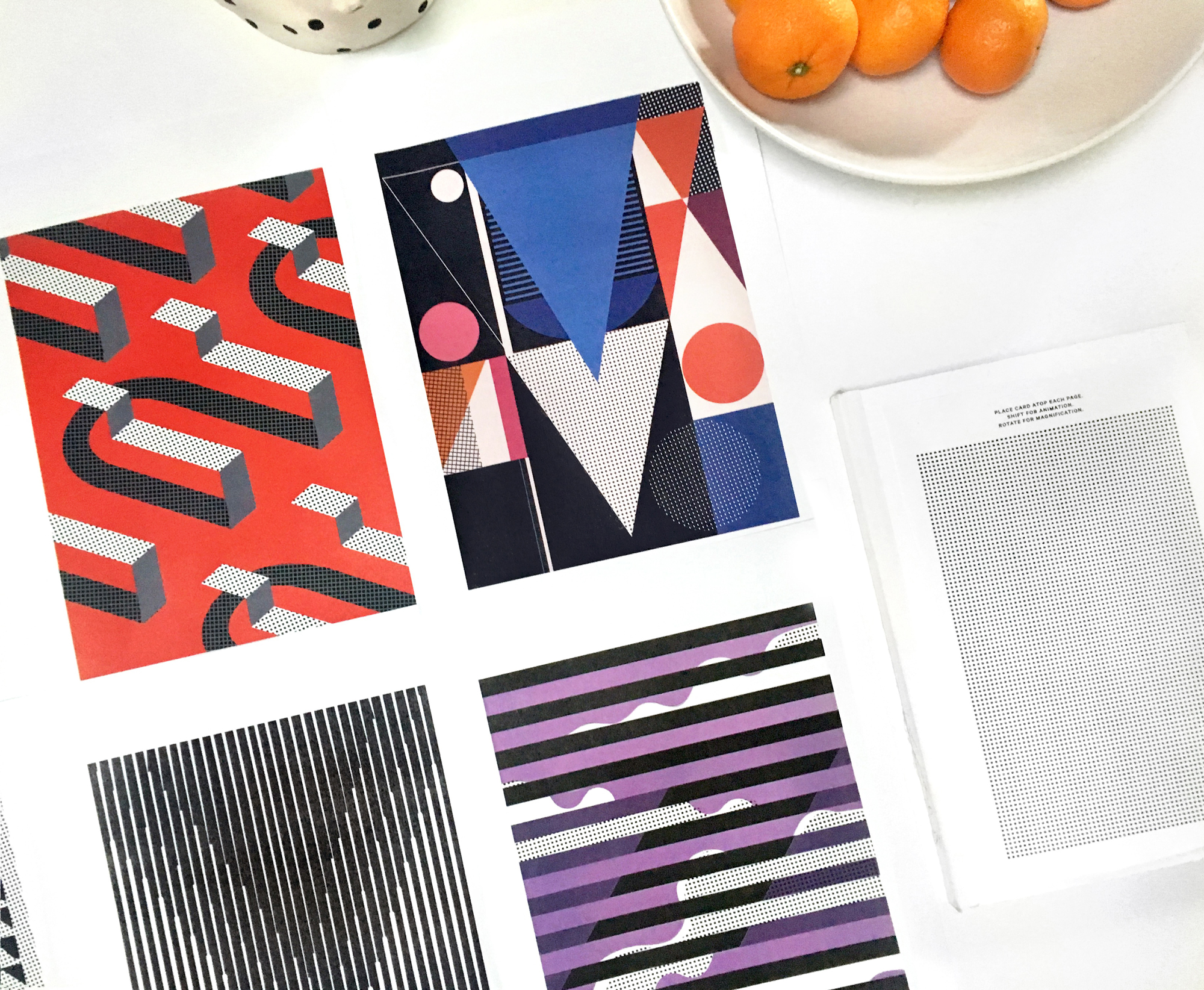 Similarly, the illusions presented here “work” by virtue of how the human eye and brain constantly attempt to complete implied shapes—they essentially cause this system to misfire. When two identical grids are stacked and then shifted, a consistent blocking/hiding of the underlying design occurs. The consistent nature of this masking taps shows/hides just the right piece of every “2”, thus activating the brain’s tendency to complete the outlines (that it believes are there), creating the illusion of movement/magnification of distinct shapes, which don’t actually exist (they are solely optical occurrences.) The more dramatic the angle of the rotation, the more exaggerated the enlargement. (The stuff I definitely do not understand: why why why does the 2 flip vertically? And why does the screen rotate it 90 degrees? If you have answers, don’t be a stranger…) 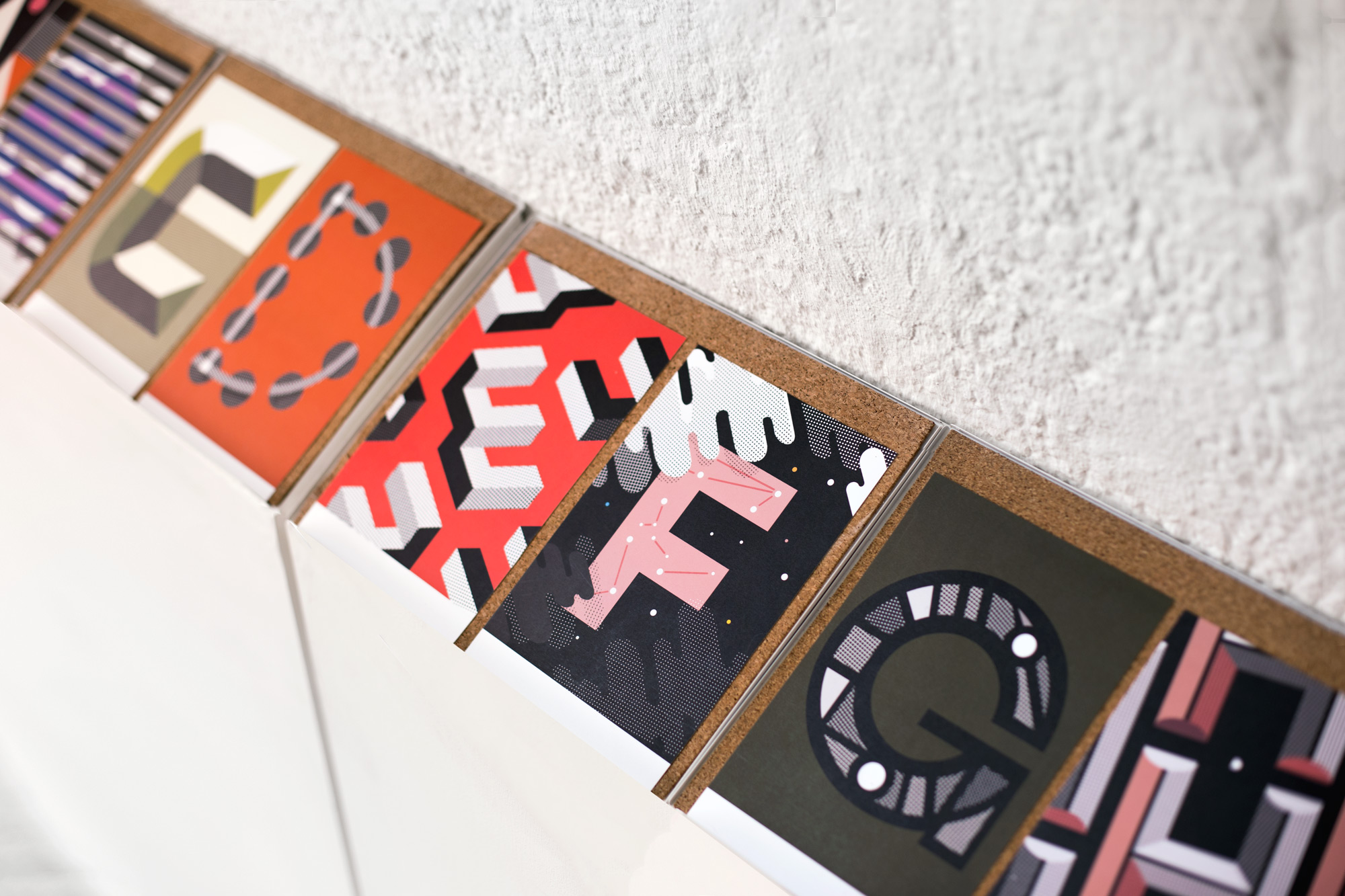 I should mention: the plinths are part IKEA-hack. I dissected Kvissel trays, so I’d have a nice cork ledge to best display the pages of the book. Highly recommended (cheap) solution for anyone who needs to display zines or books! 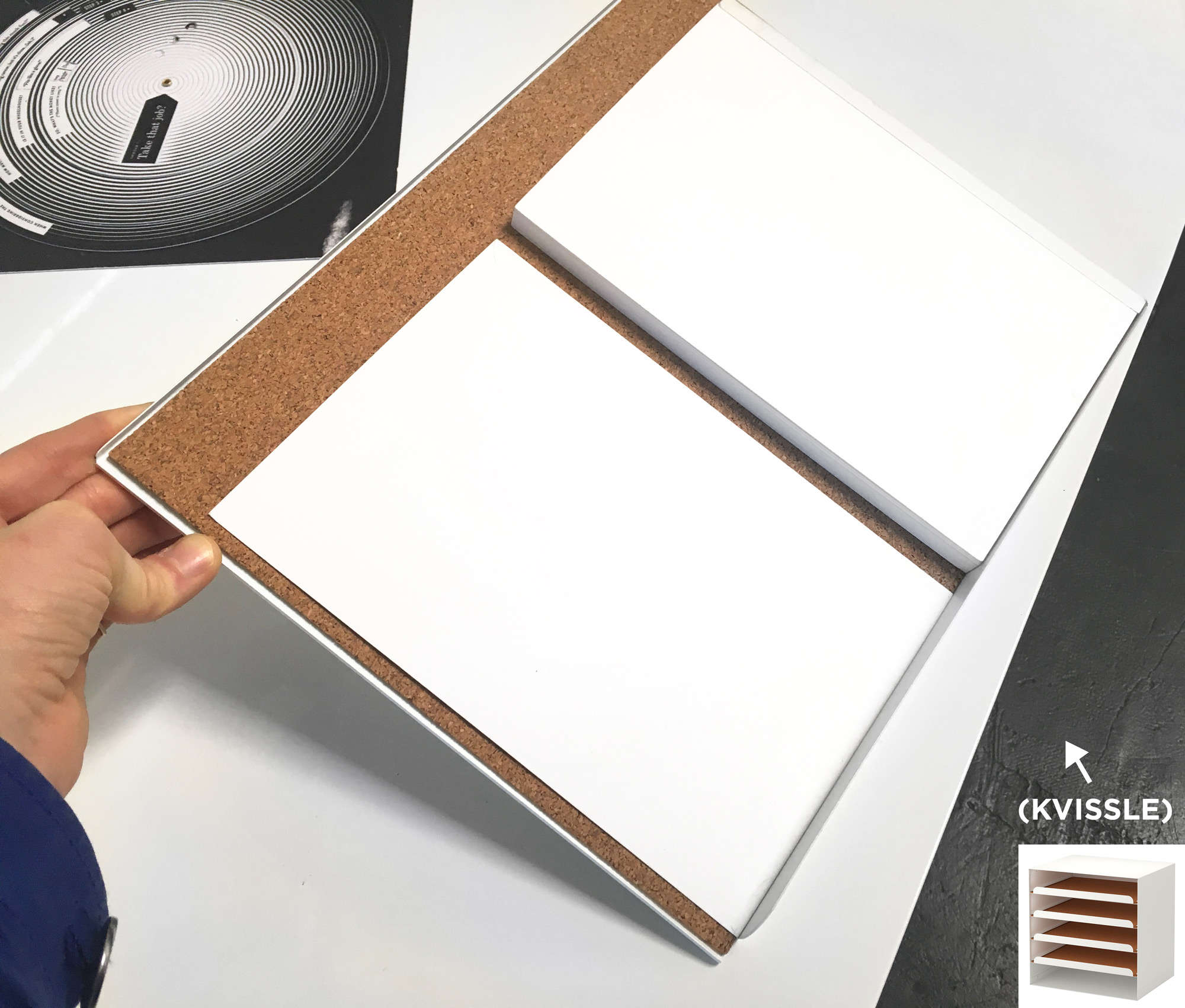 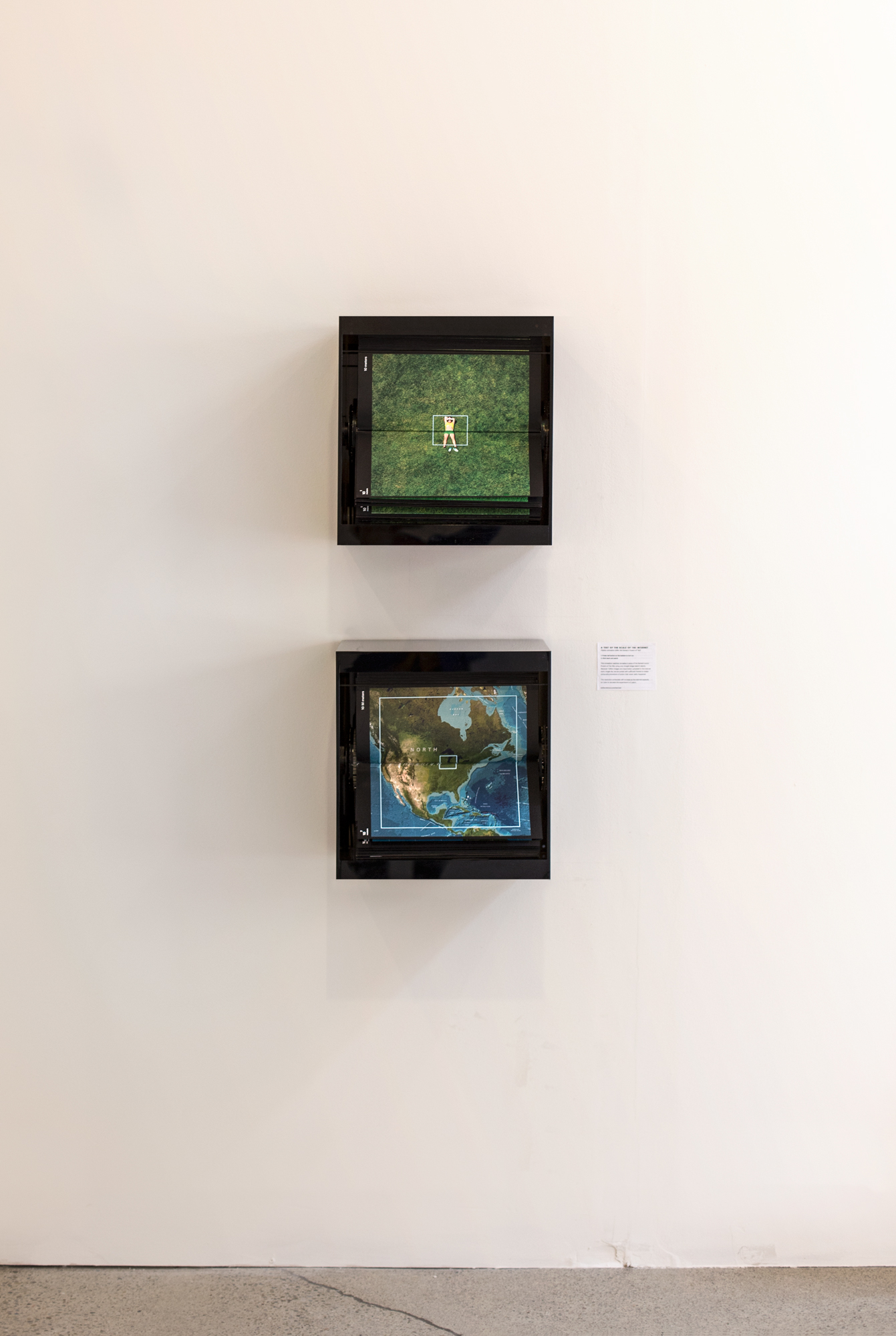 I* also built two flipbook boxes (aka mutoscopes—the contraptions you may have seen in that awesome OK Go video from last week) that you can play with. Just like the short paper-based films of dancing ladies that used to frequent penny arcades, a mutoscope is essentially a flipbook on a wheel, where the animation loops continuously.

*By “I”, I mean, I asked many people many, many questions about motors, which is a new frontier for me. The rabbit hole was deep and filled wth stepper cards, Arduinos, solder, Chinatown pillaging, momentary switches (…all to get the motor to turn on! then, finding the actual right-motor to turn 173 frames was another odyssey…) 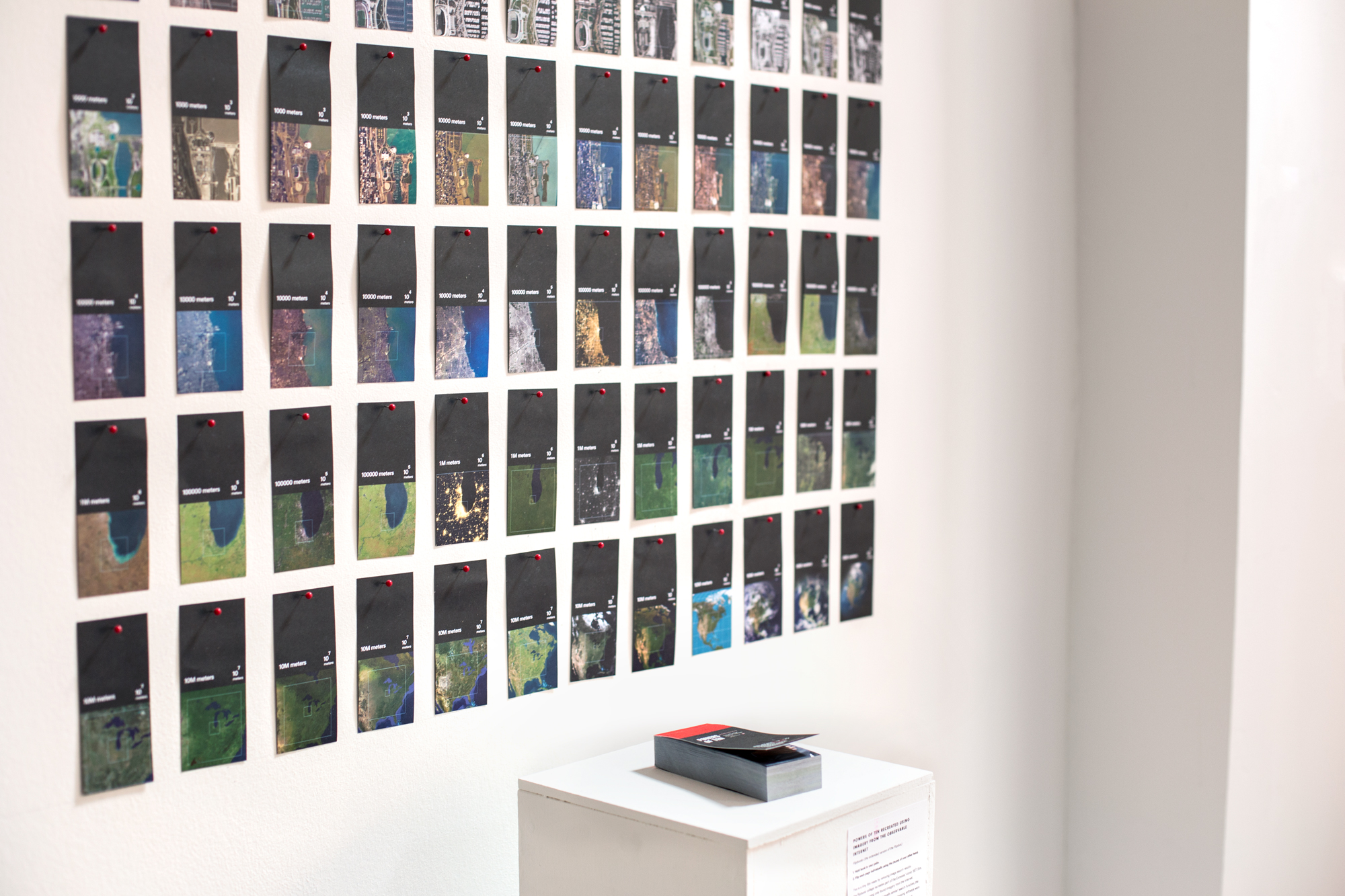 These particular mutoscopes display a segment of the Eameses’ Powers of Ten, which I recreated using found images from the internet. Why? As a way to feel-out how big the internet’s image cache really is. Turns out=”big enough” to recreate film frames… More about that project here

Because the “film” is a false continuum (made via a collage technique), it’s pretty choppy to begin with. Making a physical-animation-machine undermines its clarity further. But see if you can follow it (its motor-operated and therefore smoother than most performances of the flipbook, at least):

They occupy semi-transparent housing, so they [satisfyingly] hide little about how they work, unlike a TV or other digital frame-displaying devices. Here is a schematic anyway. (Just designed it in Illustrator, because having a vector schematic onhand made it easy to test bolts against screw sizes, belt lengths against pulley hub diameters…and just: keep track of the hundred other little tiny things that had to align/fit/coalesce.) 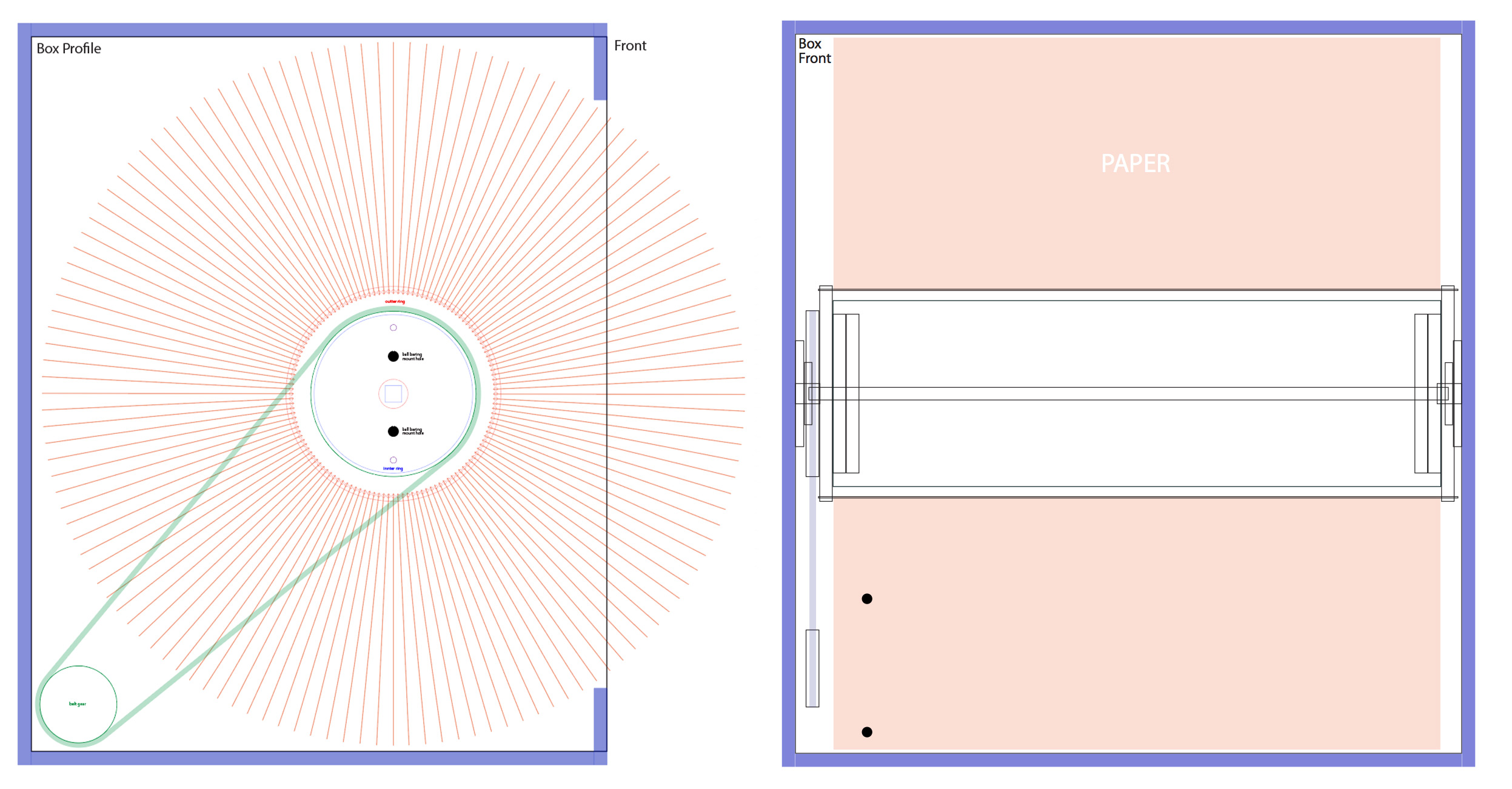 The content of the card is actually a four-frame documentary about receiving the card. It has no instructions, it directs the user through the sense of touch alone. This is an old project, but still a mindfuck to me… More than you ever wanted to know about making it here »

Also, I learned that it has a name, it is called a flexagon… for the google. (Some people were upset that I failed to identify it last time, but I just learned the name!) 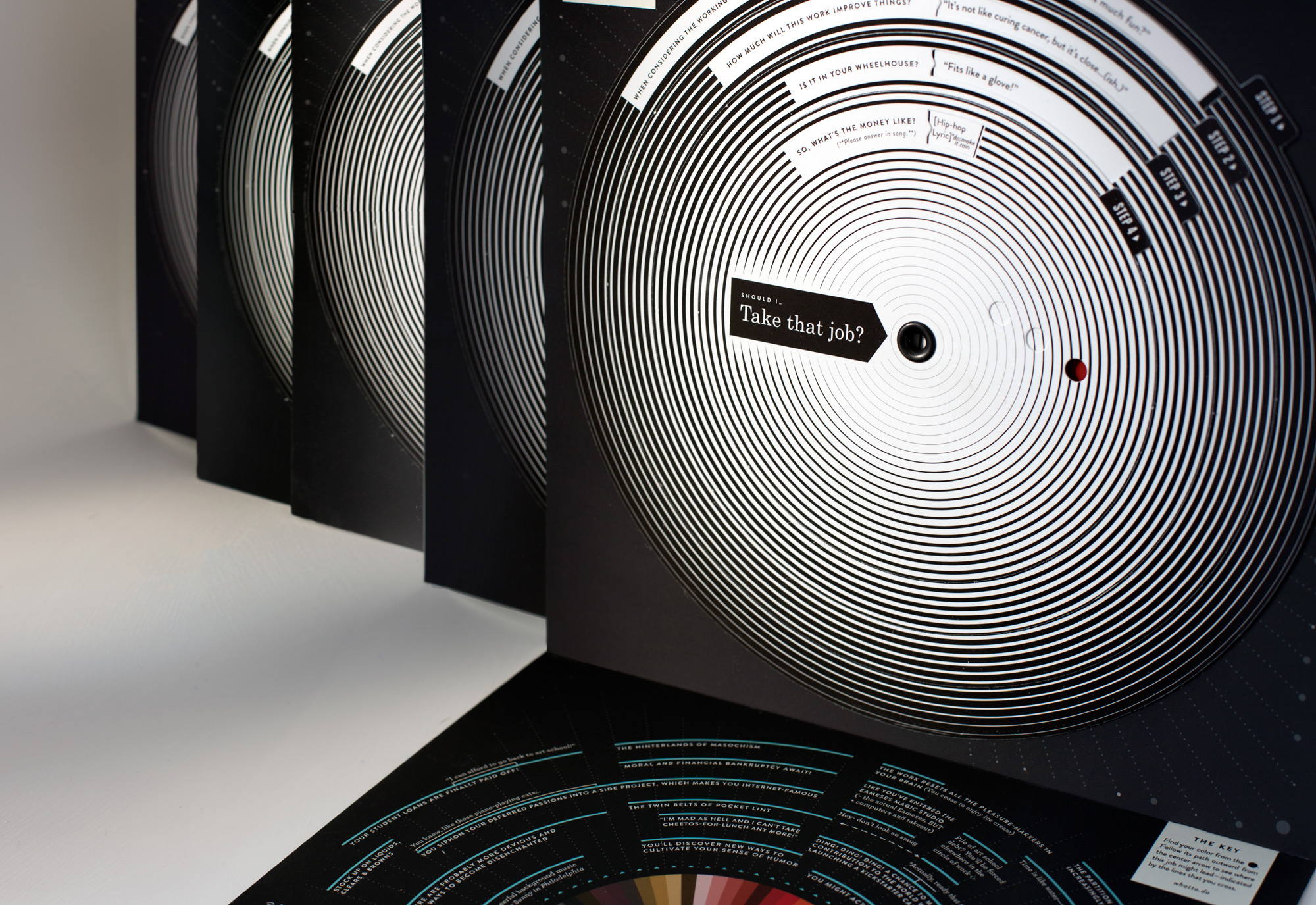 This is a paper calculation wheel (otherwise known as a volvelle) which answers the question “Should I take that job?” through inappropriately technical means—inspired, in spirit, by Joseph Weizembaum’s ELIZA. The logic that guides it is based on 4 user inputs about fit, pay, ethics, and working conditions. Its sort of a paper career counselor, I guess. 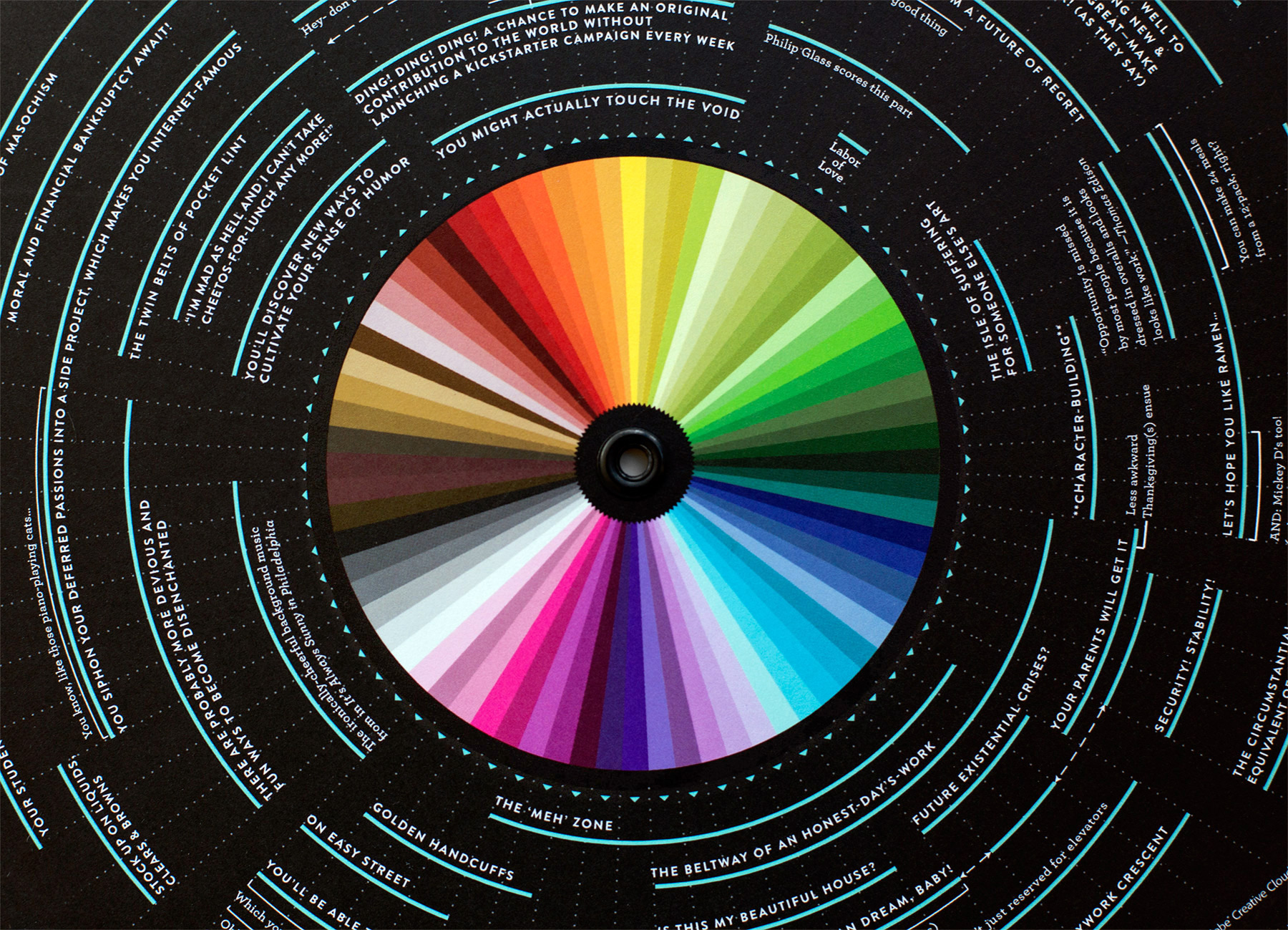 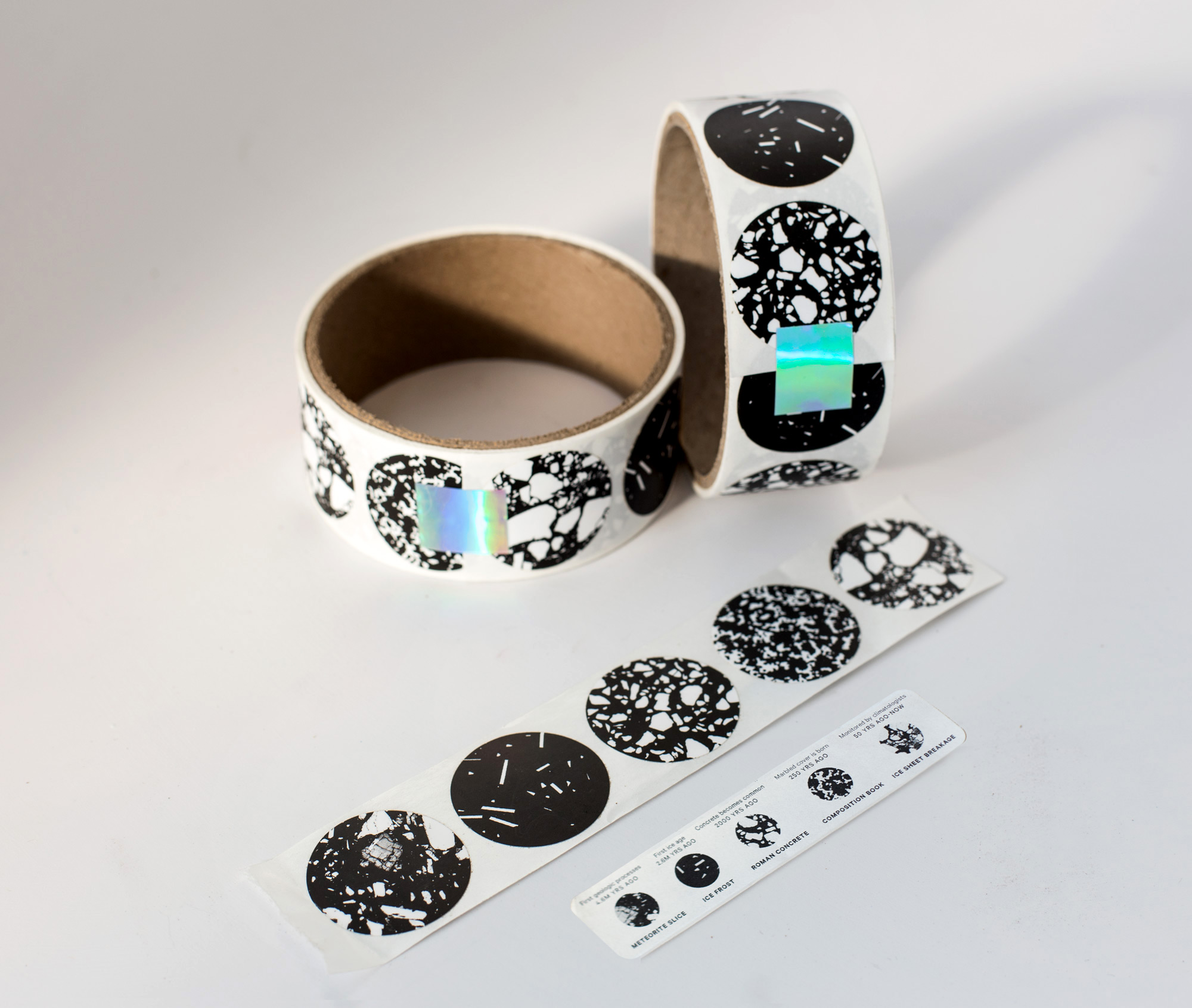 The entire arc of time [pretty much], as told through visually-similar textures. More info+buy here

They look good stuck to an very wide variety of things (graffitied-up my apartment yesterday…): 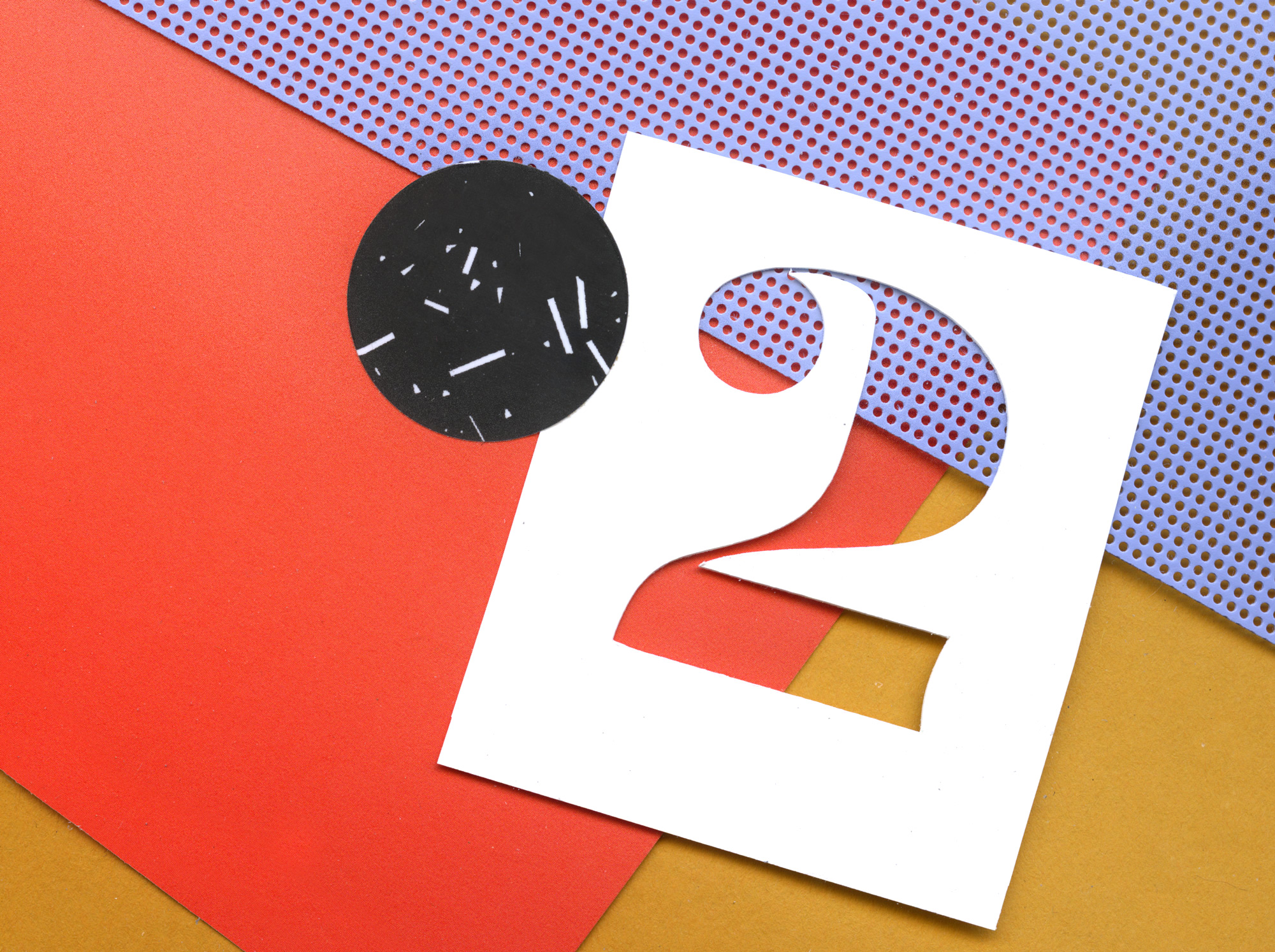 Finally, to display all of the book-things I asked a local metal shop to cut holes in some IKEA shelves to create this gradient wall installation. 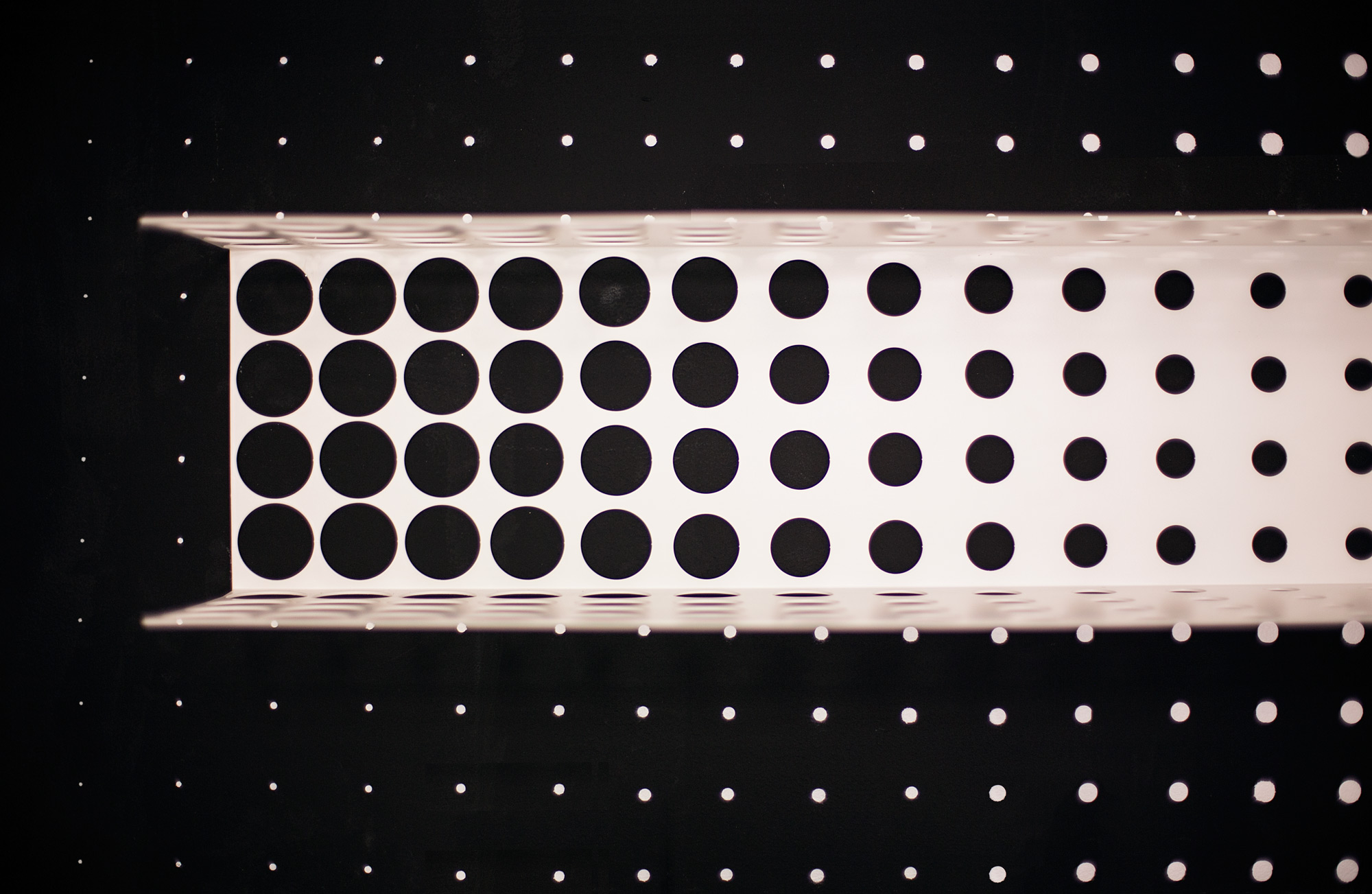 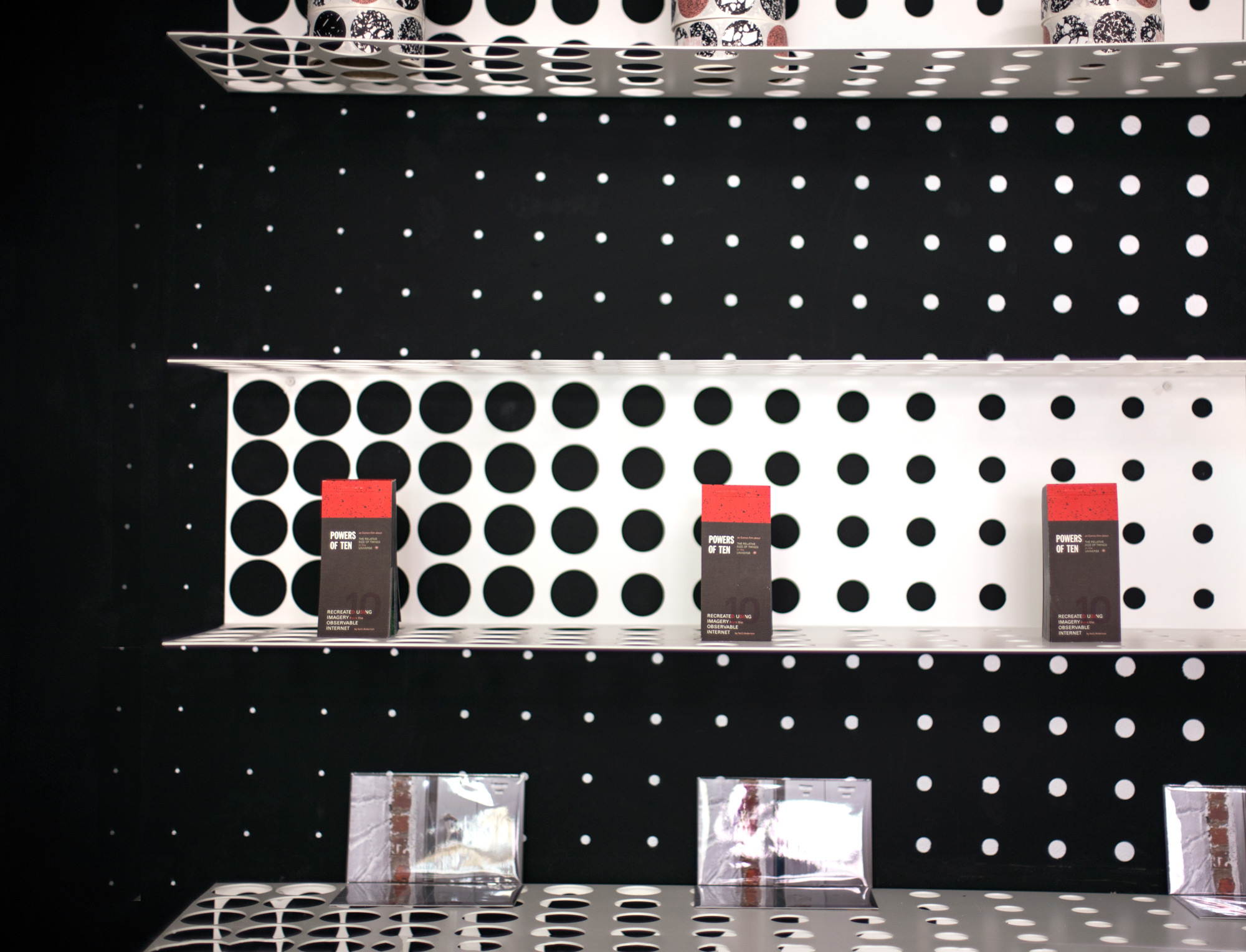 As you can probably tell, setting up the show was a tad overwhelming. Now, whenever I pass a gallery show on my bike, I nearly fall off… (“It’s a damn MIRACLE!”) Thanks to everyone who came out and saw it and SUPER GIANT ALL-CAPS THANKS to my friends for the help. Even more thanks is in order to Daniel for putting up with the 6-months of mess too. It would have [literally] been impossible without you guys. Thank you! 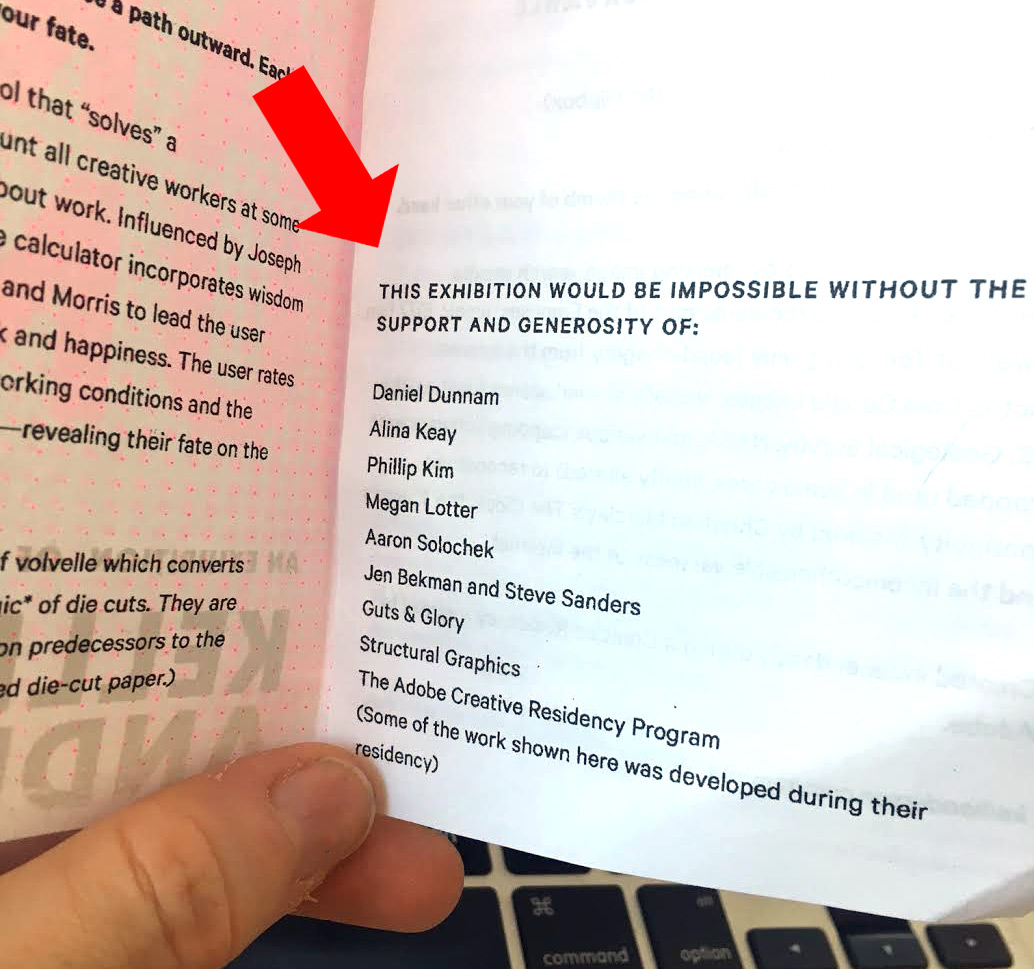 OK, back to this: 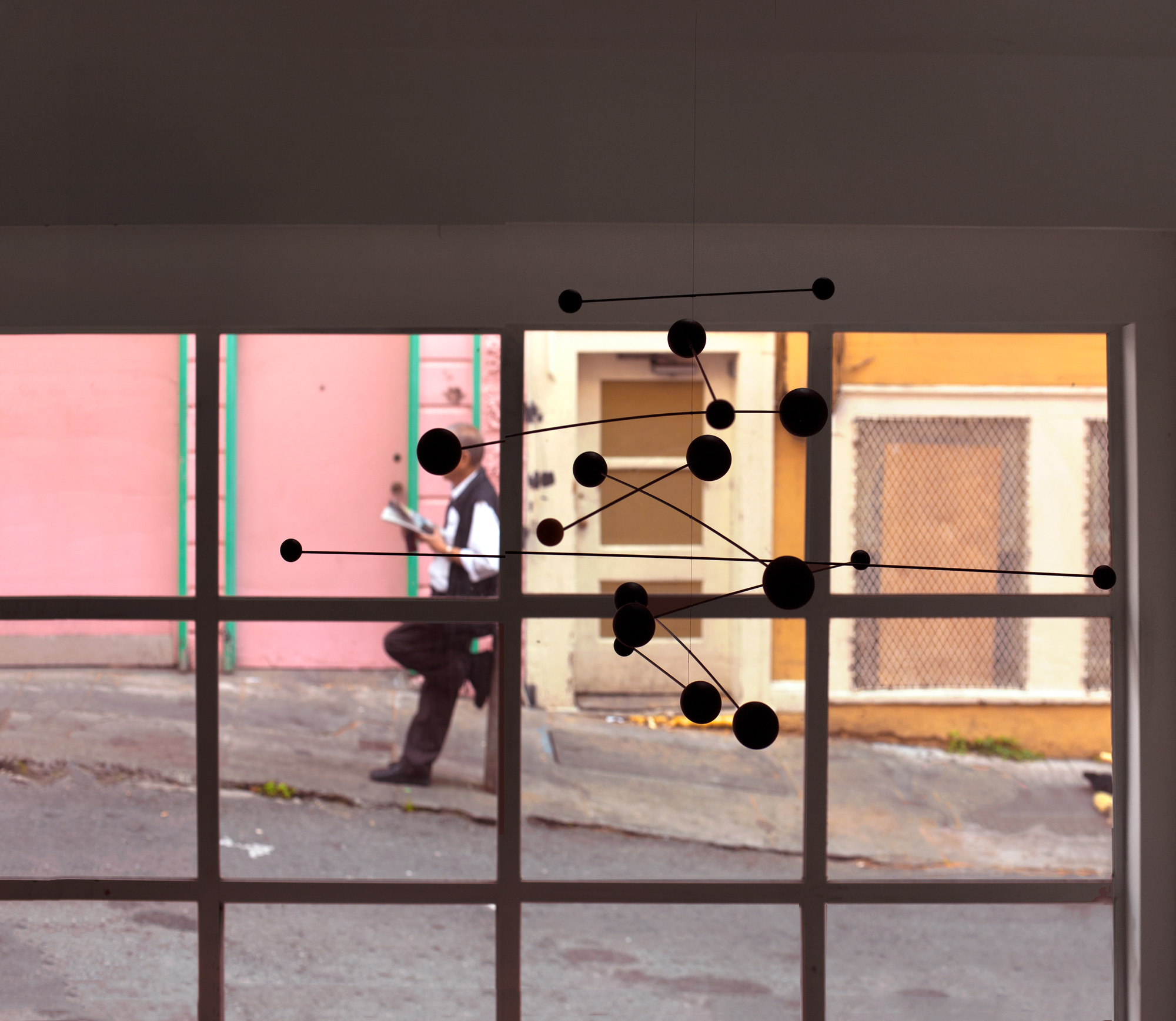