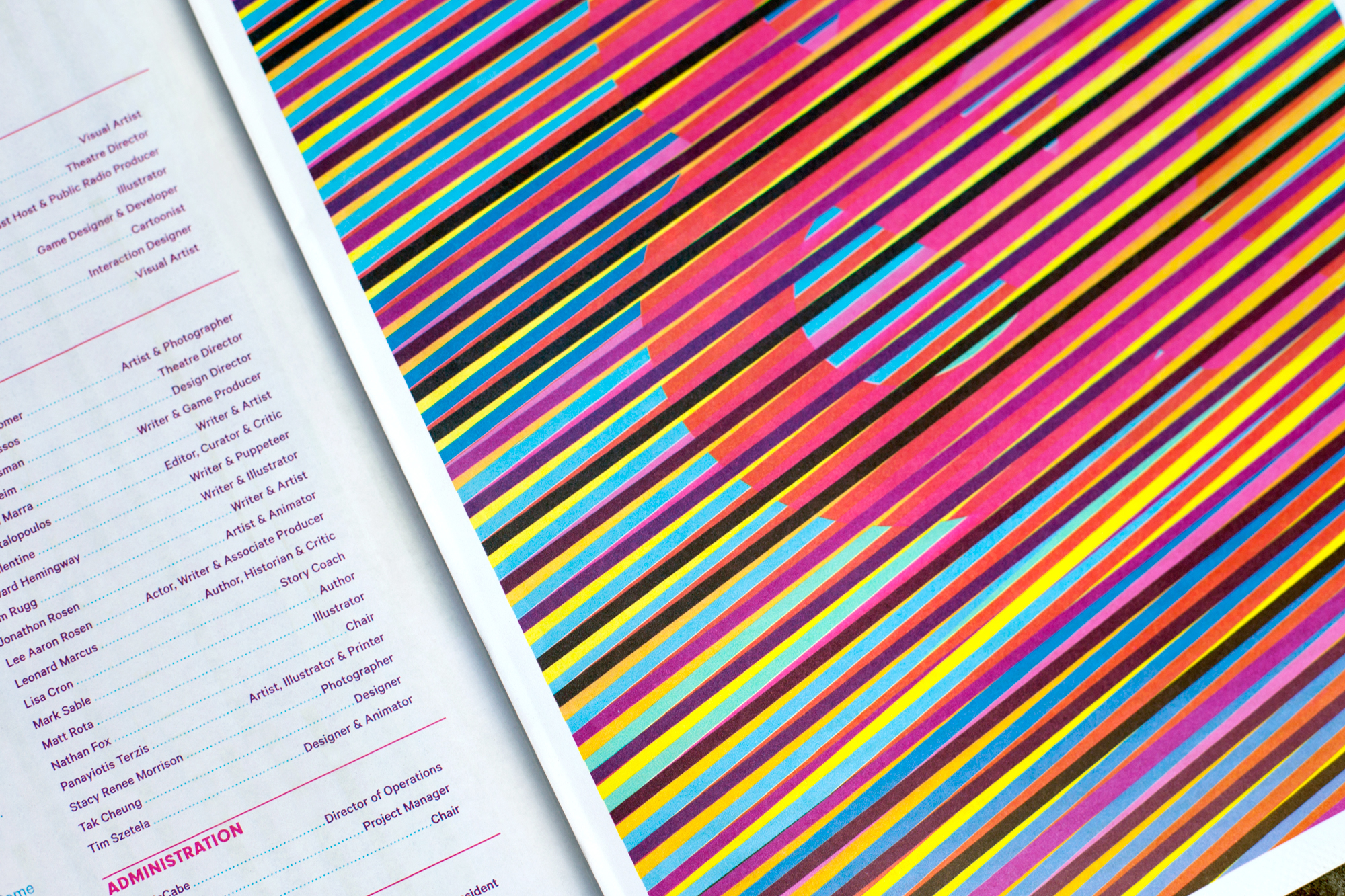 A quick note to say: a new site is coming really soon by my friends at Oak (pardon the dust and non-responsiveness in the meantime…)

I devised the branding for SVA’s Visual Narrative students’ final show—And Then….

I’ve attended in previous years and have been consistently impressed by the remarkably wide (and intrepid) variety of work that the students create—from narrative video games to sequential art to immersive storytelling installations. It is really exciting to see the new generation of art school students producing work without regard to traditional [media-specific] boundaries. 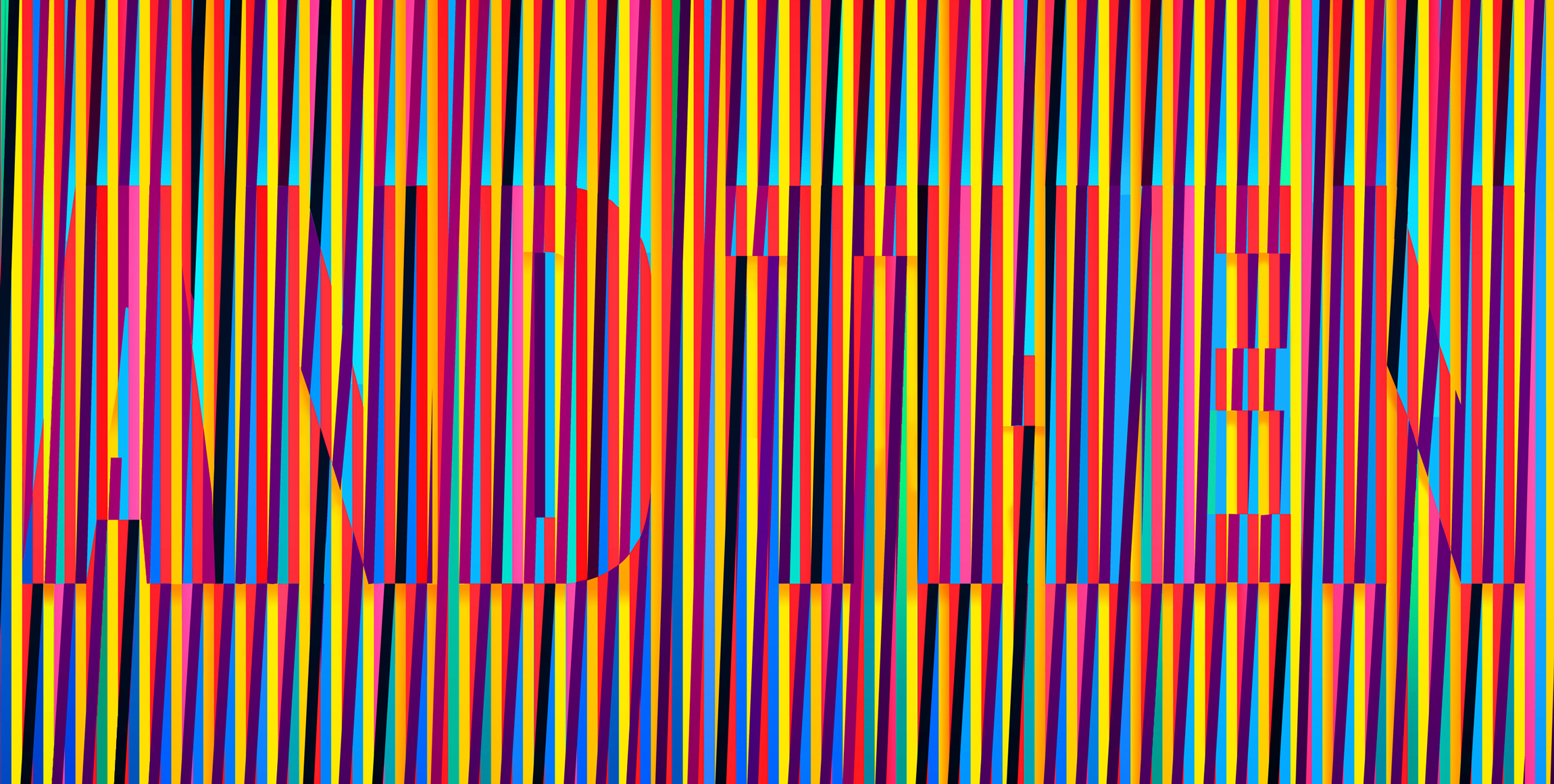 The main branding followed an instruction-based procedure as a starting point (a lá Sol Lewitt’s wall drawings.) The set of “rules” followed in the creation of a such composition feels [oddly] narrative and formally-descriptive at the same time. It uses words like “when” and “then” without actually telling a story-story, per sé:

Draw vertical stripes: blue, yellow, and red. Repeat along the x-axis. Lay a diagonal black stripe over each red one, so that the bottom falls on the red stripe that is one place leftwards.

Where the stripes pass through the boundaries of a letter, swap the red and blue stripes. When a black stripe exits a letter, it moves one stripe leftwards

Since it had to actually be legible as branding, I let the instructions function as just as a starting point and tweaked the stripes to attain contrast and clarity.

Artists and designers have long ceded creative control to other processes—like automation or chance—to get beyond the limitations of intent. I discussed this history with Libby Nicholaou here if you’re interested. And my own #madewithrules sporadic/experimental series can be found here.

The various applications for this branding didn’t stray far from its generative, Cruz-Diez/Bridget Riley-inspired origin. The gallery guide featured background on each student’s work and continued the stripe-intensive theme: 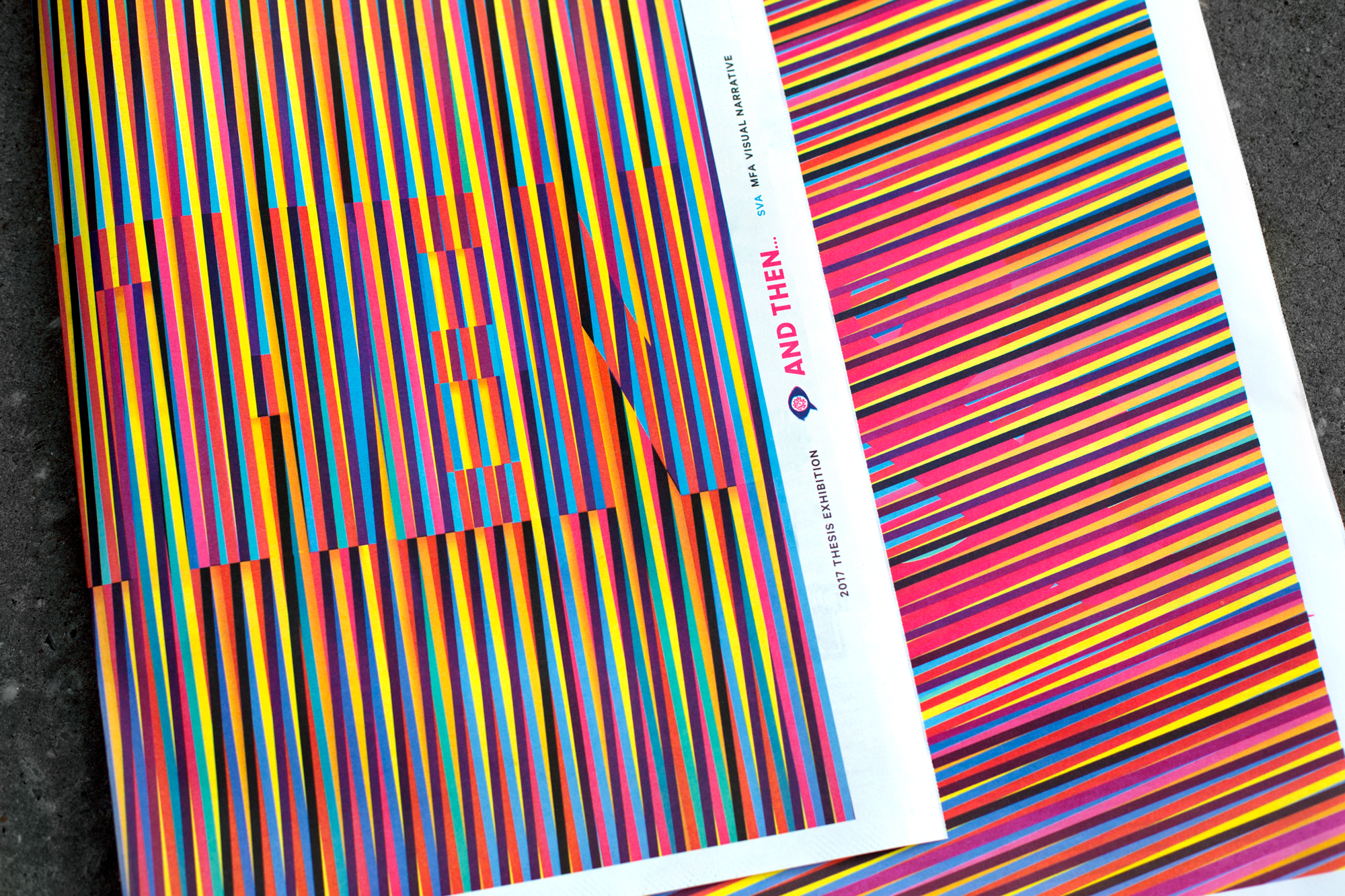 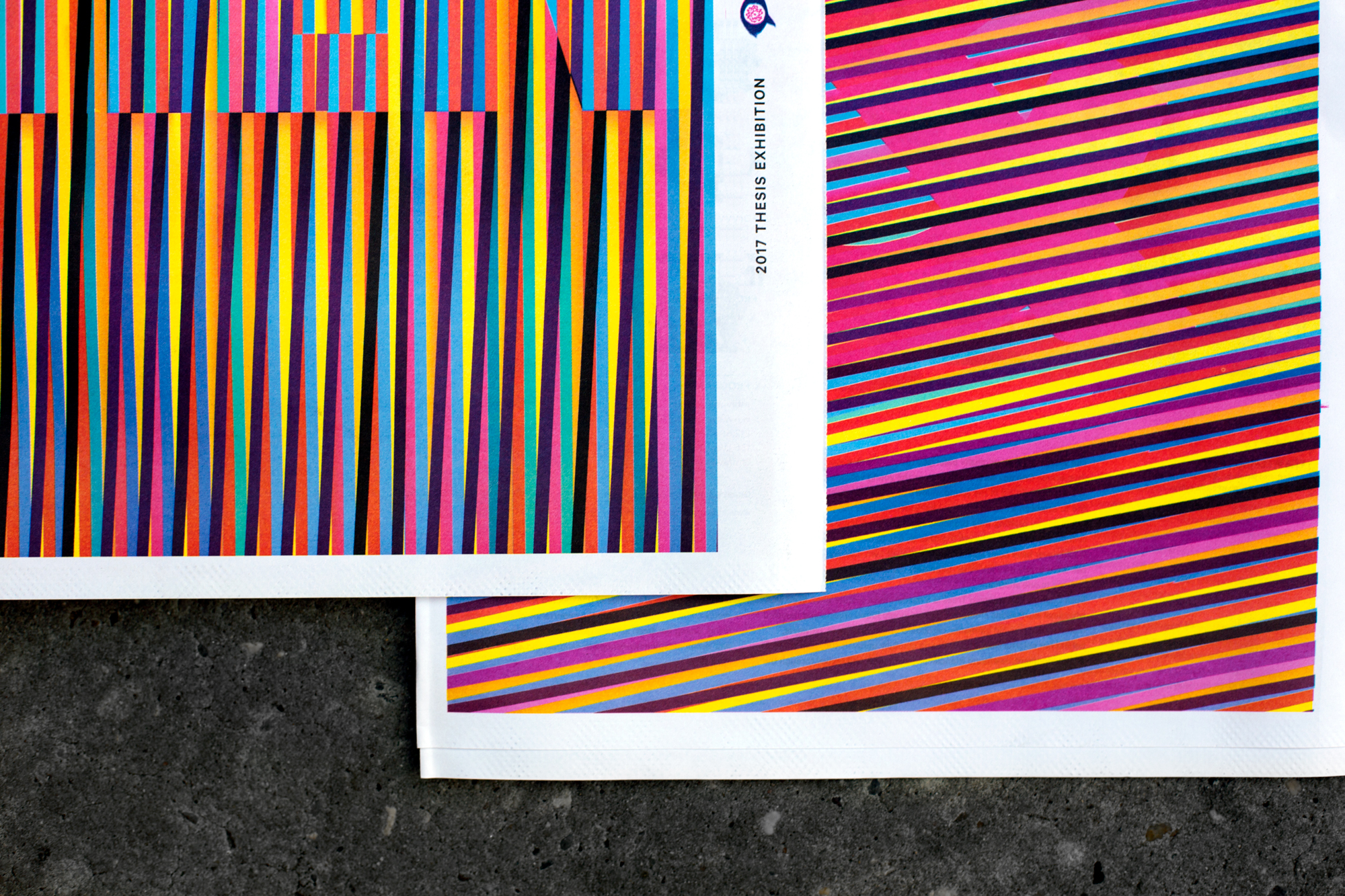 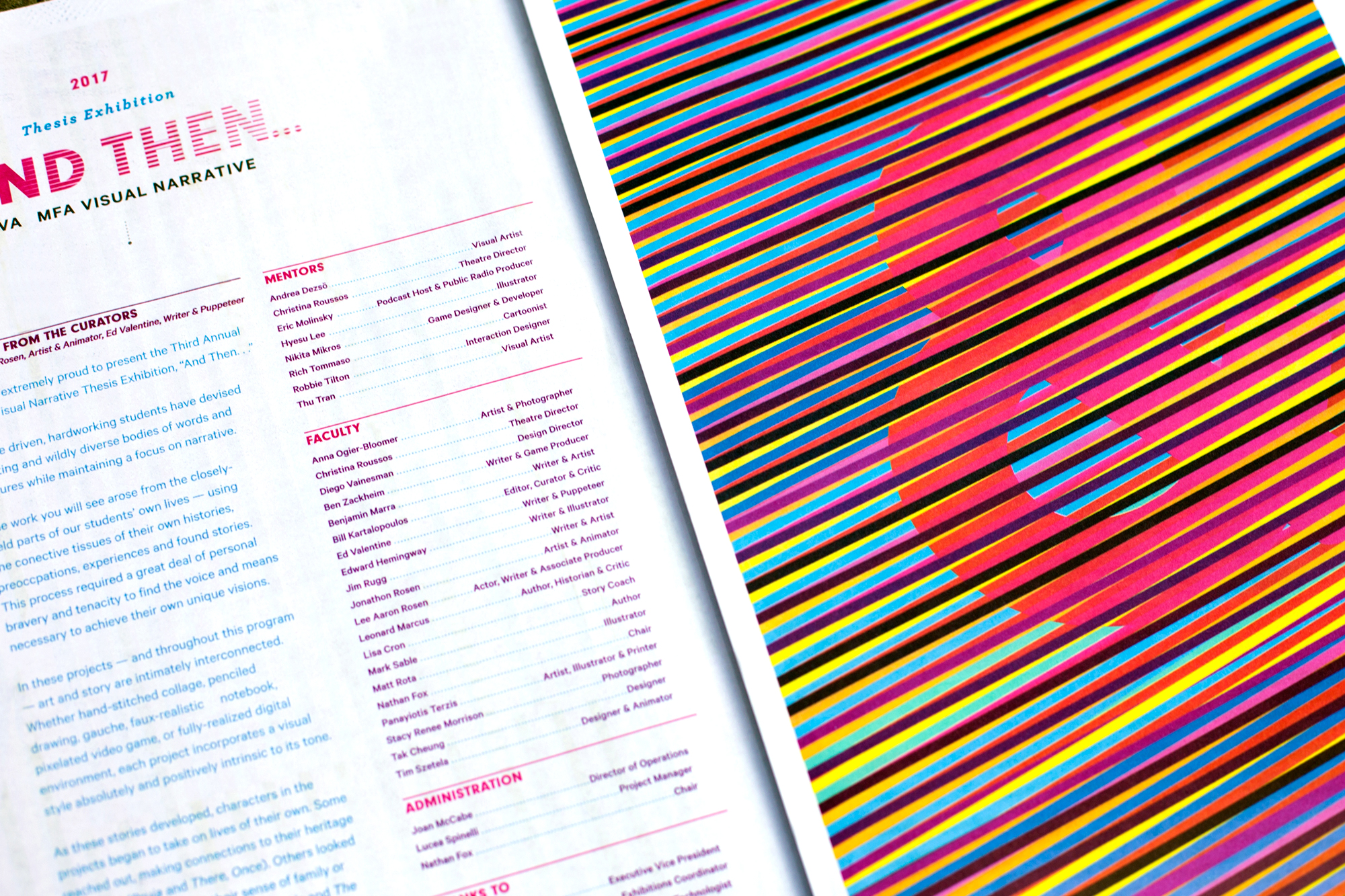 There’s also this animation, which I made by nesting layers of moving stripes:

The entryway wall text employed the stripes in a manner that referenced decorative wall coverings (so it might “fall back” moreso than the super bright stripes.) 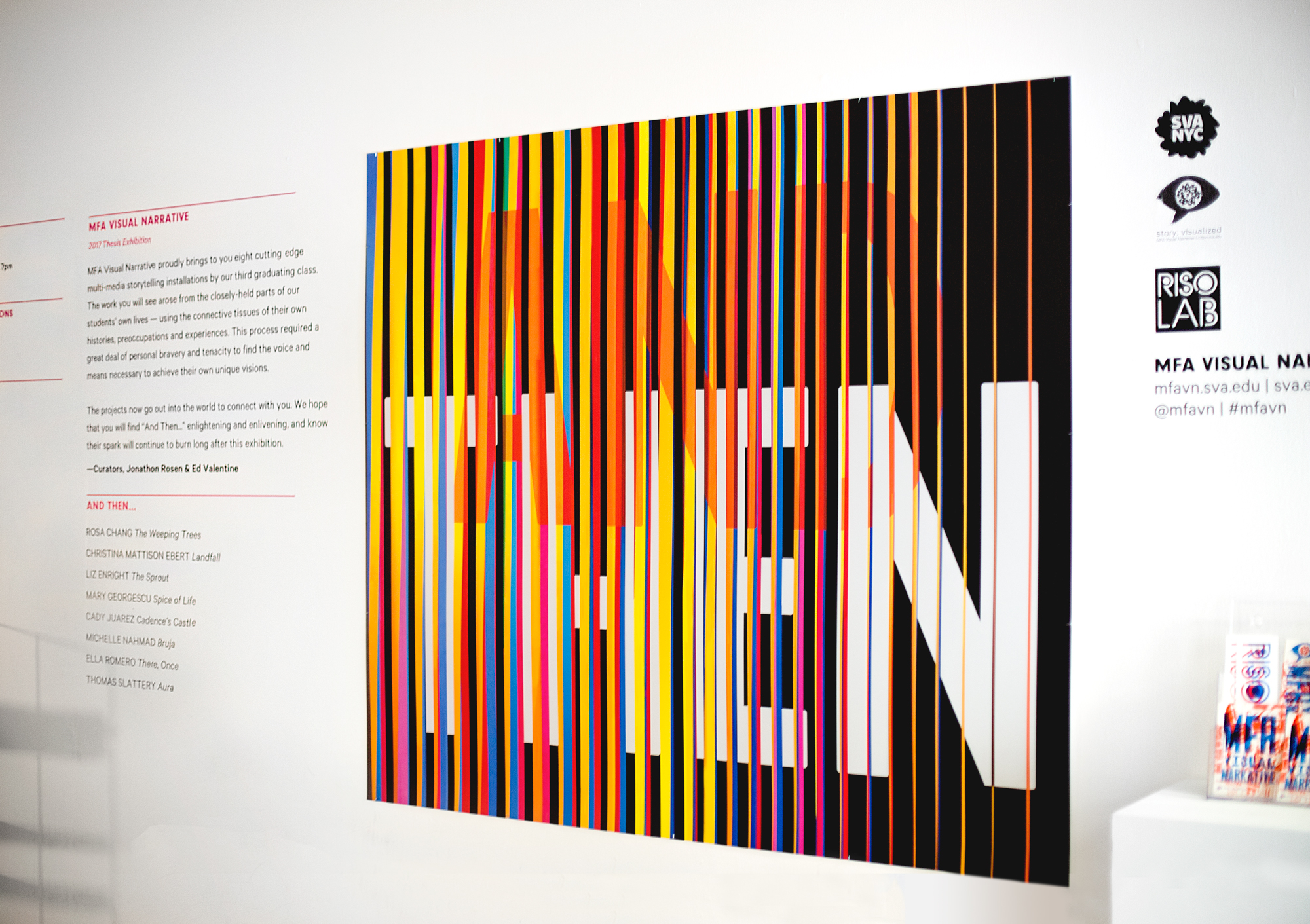 For the window facing the street, I created a physical graphic from ribbons that followed the same madewithrules procedure. 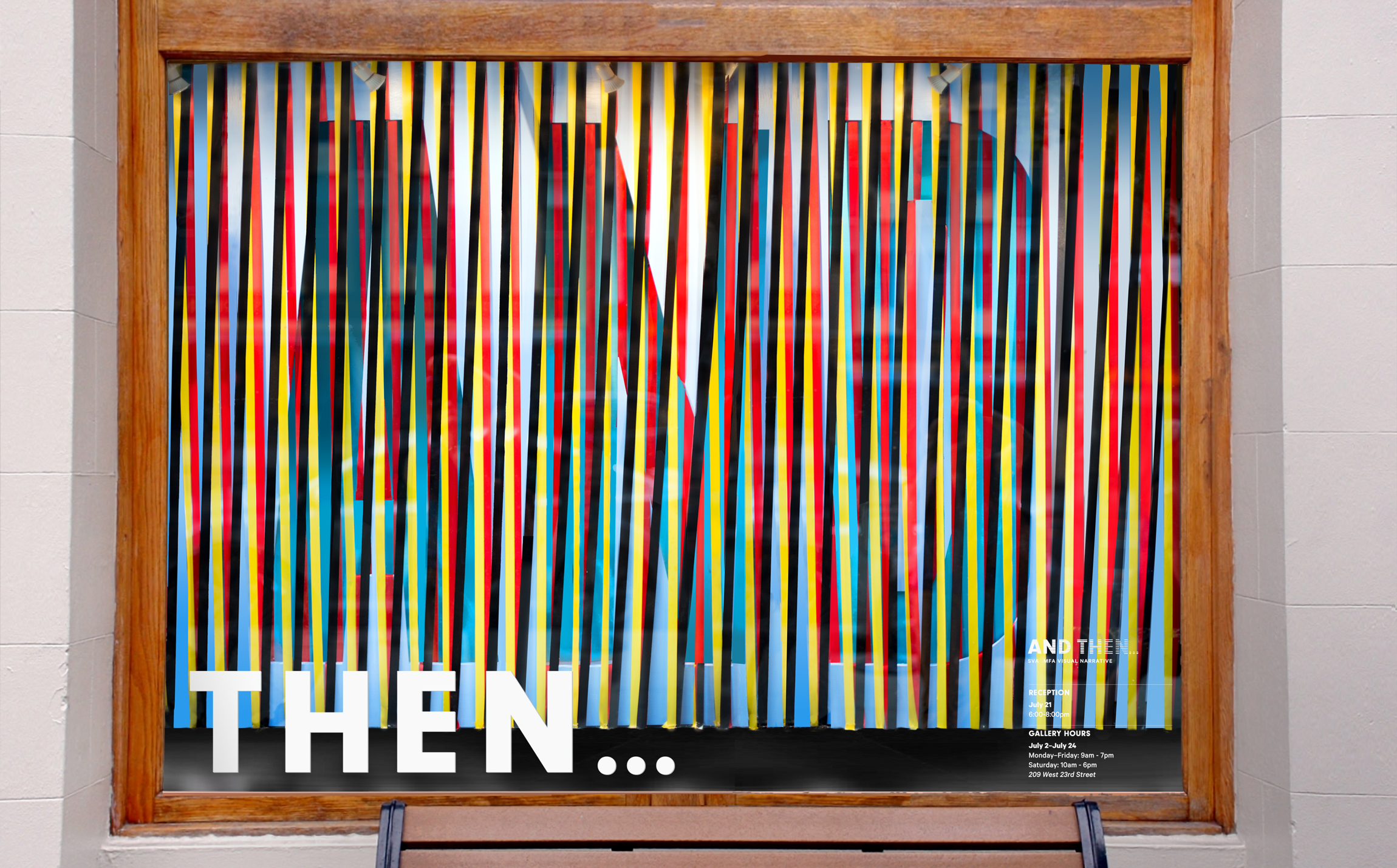 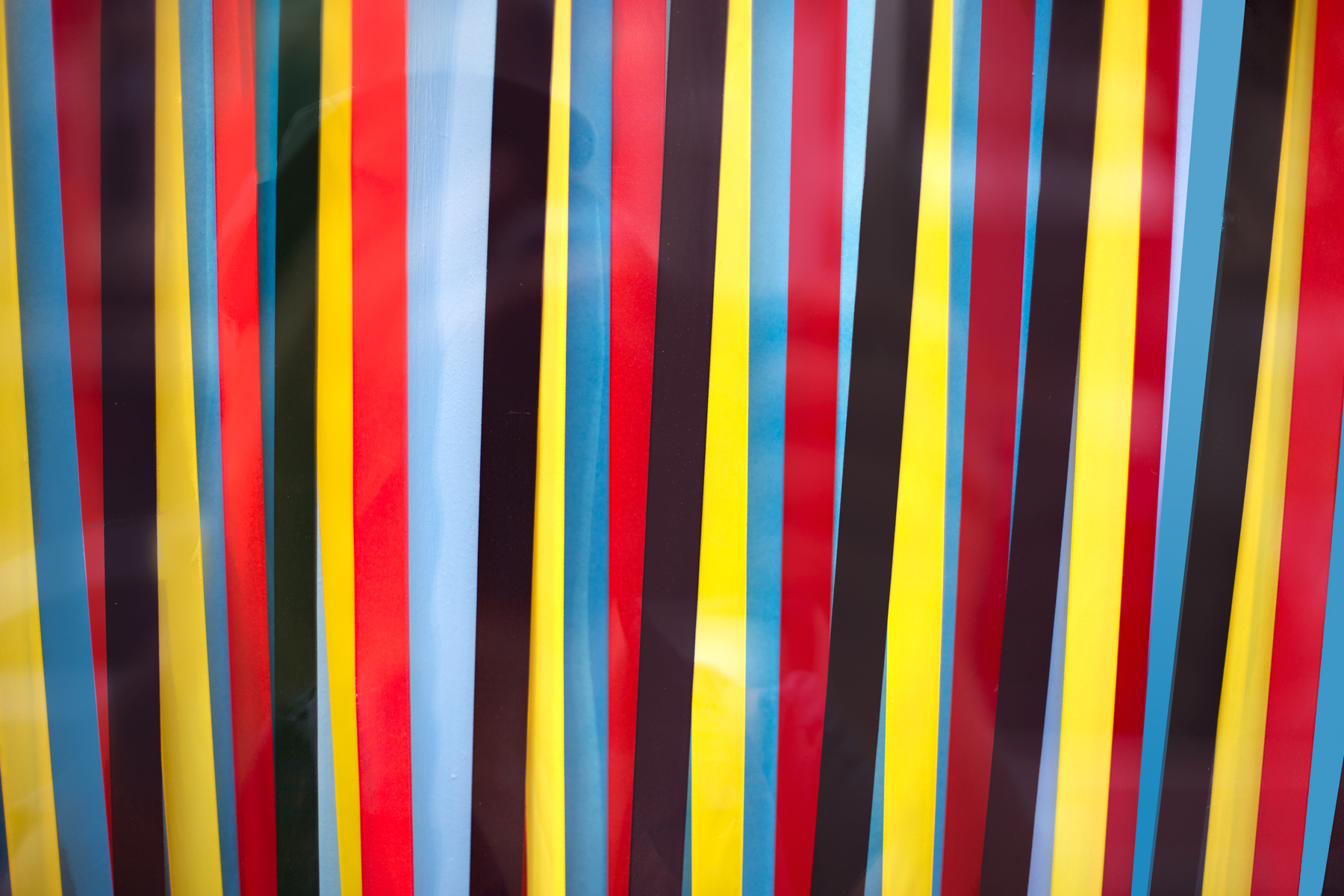 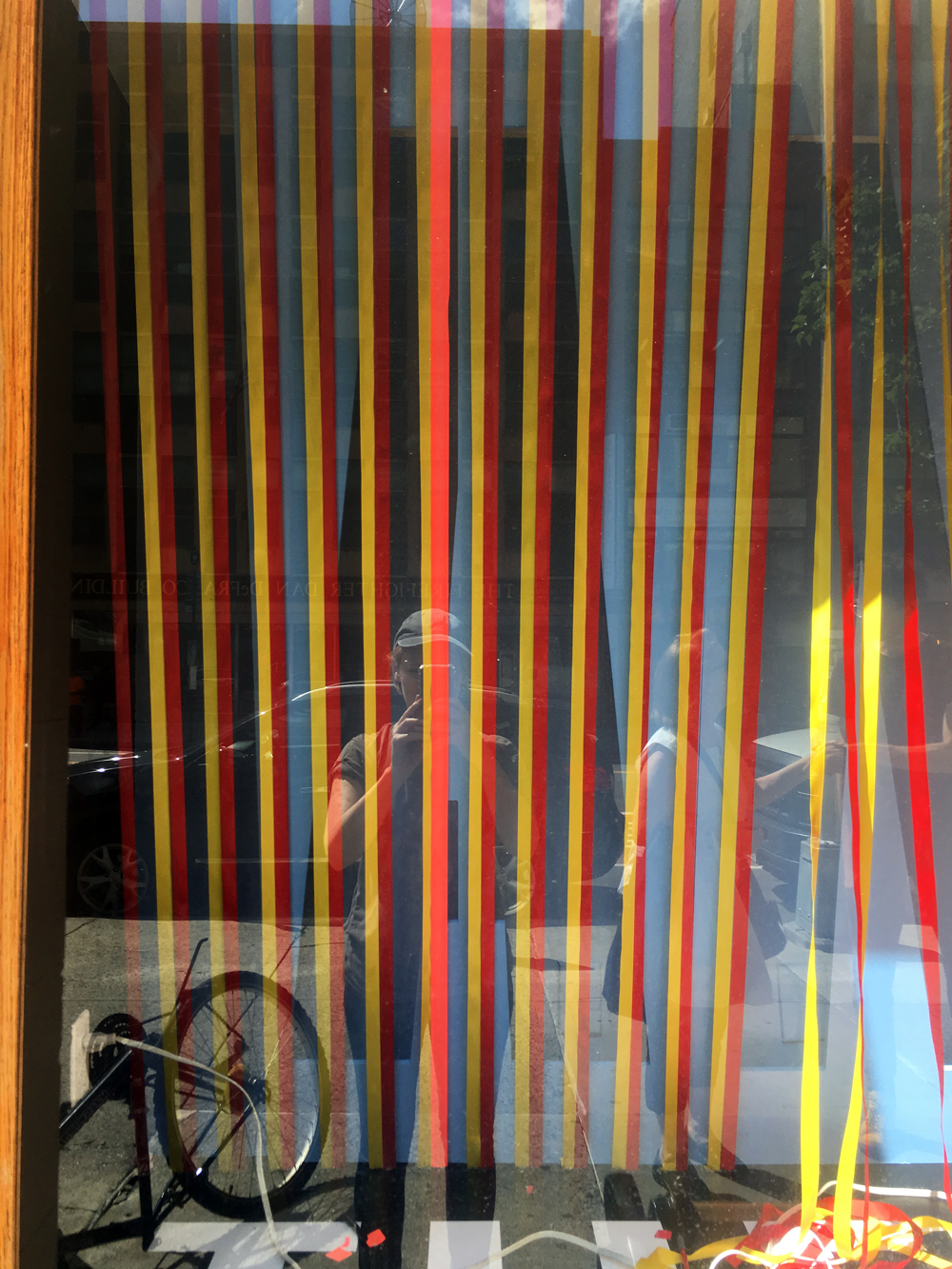 Congratulations to all of the students! Thanks to SVA for inviting me to be a part of this. And thanks to intern-extraordinaire, Stefan Pelikan for the help and for almost losing a limb to hot glue. 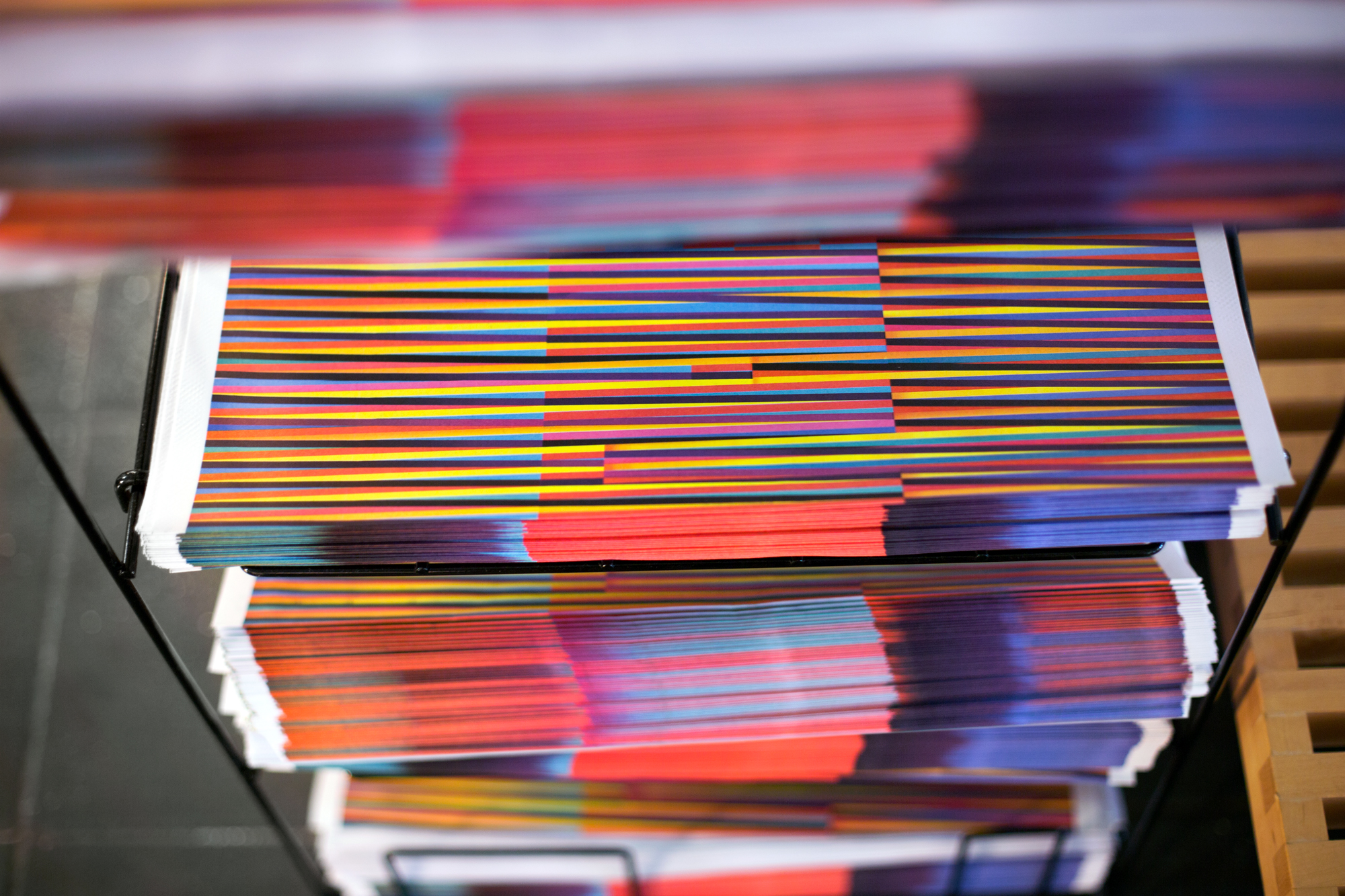