Buying a Gun in America 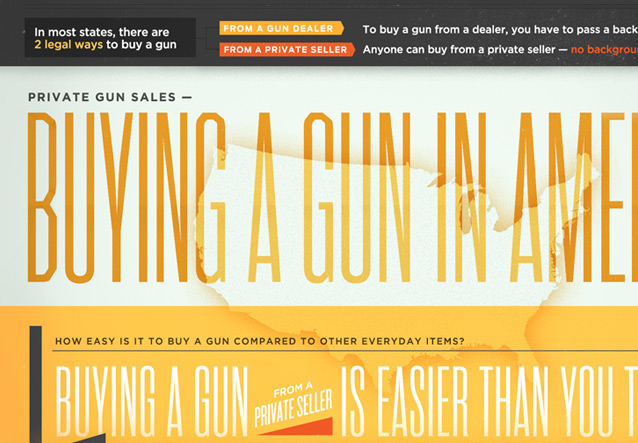 Like many others, I felt a sense of urgency to do something after the Newtown shootings last year, but wasn’t sure what I was qualified to contribute. That’s why I was so excited when Ted Alcorn from Mayors Against Illegal Guns (MAIG)—a non-partisan coalition of 900 mayors who advocate for smarter gun laws—approached me in January to help visualize some complex/tricky policy ideas. (Fortunately, one of design’s super-powers is presenting complex information in a digestible manner.) We’ve since created a series of infographics (or, in this case, perhaps “information illustrations”) that explore “Buying a Gun in America” from three different angles. They are being used as part of MAIG’s “Demand Action” initiative.

The three graphics came out of piles and piles and pages and pages of data and research. MAIG collects data on how policy effects gun violence outcomes and then educates the public and advocates for those policies that have been found to help reduce violence. The idea is that better understanding what the policies are (and how they statistically correlate to different outcomes) is the first step in building consensus around the development of more effective policies.

The first infographic explores how astonishingly easy* it is to buy a gun in America. (*It is, indeed, easier to buy a gun than it is to buy Sudafed or a beer.) I thought it would be most effective to but this into everyday perspective—so we took five different everyday items: a beer, a car, Sudafed, and a gun and showed what legal requirements exist for each that filter-out inappropriate purchasers. 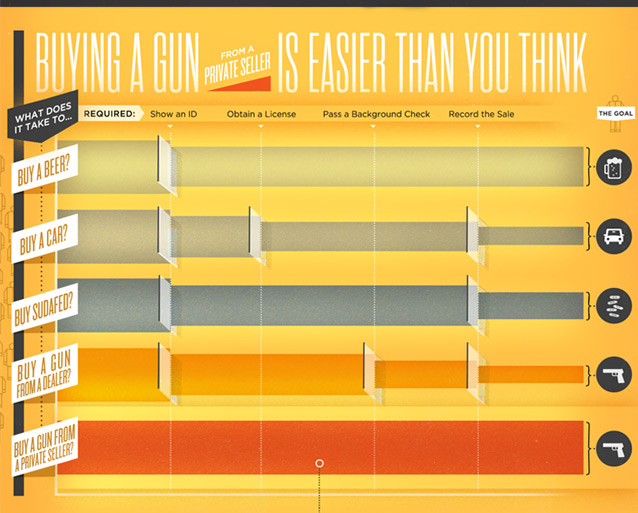 For buying a gun, there are two legal options. Option one is to buy a gun from a dealer. In that case the buyer must pass a background check to ensure that they aren’t a prohibited purchaser. However in most states, there is a perfectly legal second option: Buying a gun from a private seller. In this scenario the background check isn’t required, and data shows that this is the “loophole” by which the majority of criminals get their guns. So while you need things like an ID and a license to buy a car, but, incredibly, nothing is needed to legally buy a gun from a private seller.

This loophole is a like letting people step around security screening at the airport: 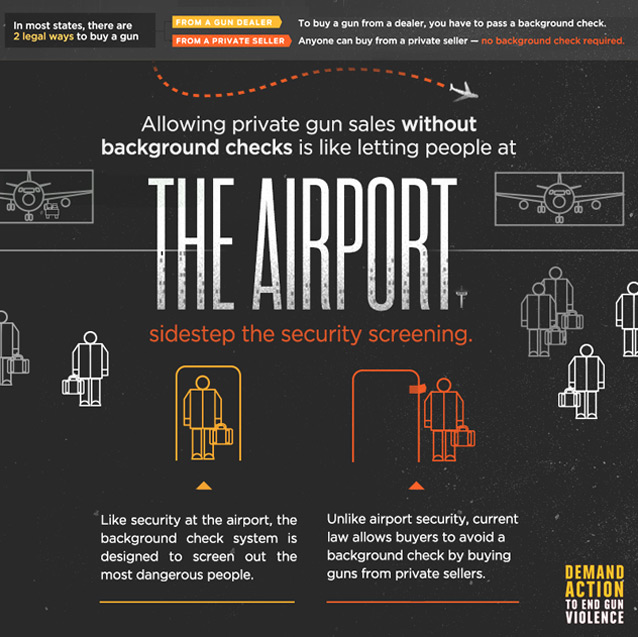 How Many Guns are Sold without a Background Check?

Infographic 2 attempts to show the scale of this problem—that a full 40% of the guns changing hands in America are transferred without a background check. 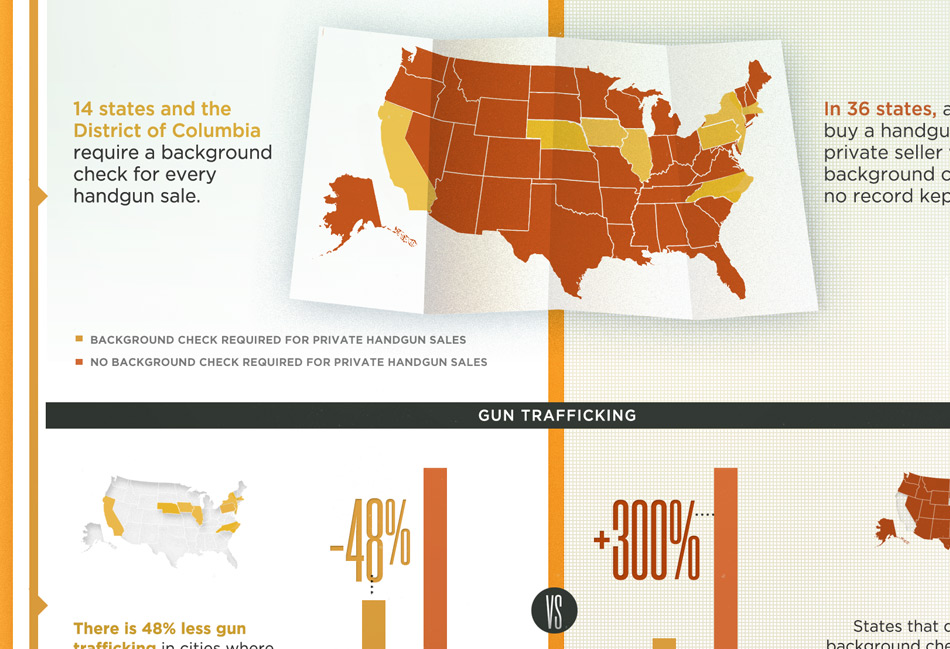 Infographic 3 contrasts the measurable policy outcomes in states that have universal background check laws (there are a few) and those without. The findings are dramatic:

• In states that don’t require universal background checks, the vast majority of inmates had purchased their guns off-the-record, from a private seller.

• Levels of gun trafficking and violence against women (gun-homicides) are far higher in states that don’t require universal background checks.

• Guns recovered at crime scene across state lines (and across the border) had disproportionately originated in states that did not require a background check.


If this inspires you to get involved as well, point yourself to Demand Action’s site here. They do amazing, important, and effective work.

13 Responses to “Buying a Gun in America”