Last year, I got to draw 275+ body parts for Tinybop’s very first app, The Human Body. Today, Tinybop released their 2nd app, called PLANTS!. It is basically a working forest in a box (the box, in this case, being an iPad.) It aims to help kids understand that the forest is a system—making nature’s cause-and-effect patterns discernible through interactive play.

While working on the Human Body, I created a little stop motion video out of paper about it (more or less a bizarro/personal experiment.) As it turns out: the physical animation style actually ended up working quite well to transmit the tangible/touchable nature of the digital toy. For Plants, we decided to make a another touchable video—one that would portray a kids-eye-view of how the app (and the forest itself) feels to explore.

The environment depicted in Tinybop’s new Plants app is dense, rich, and unpredictable. There are animals. It rains. Things catch on fire. The ground freezes. New trees grow. It presents a working machine of the forest that as-closely-as-possible mirrors the structure and behaviors of an actual forest—making it exciting to explore (and a little mysterious) just like a real space. It is programmed to be-beholden-to the laws of physics and the changing of the seasons—just like a real space.

So the video really had to give the viewer the feeling of being present in a real, dimensional space. My partner-in-crime Daniel Dunnam and I proceeded to daydream spatially with paper and imagine what it would feel like to inhabit a tiny forest world, entered by slipping through an little window in the iPad screen: 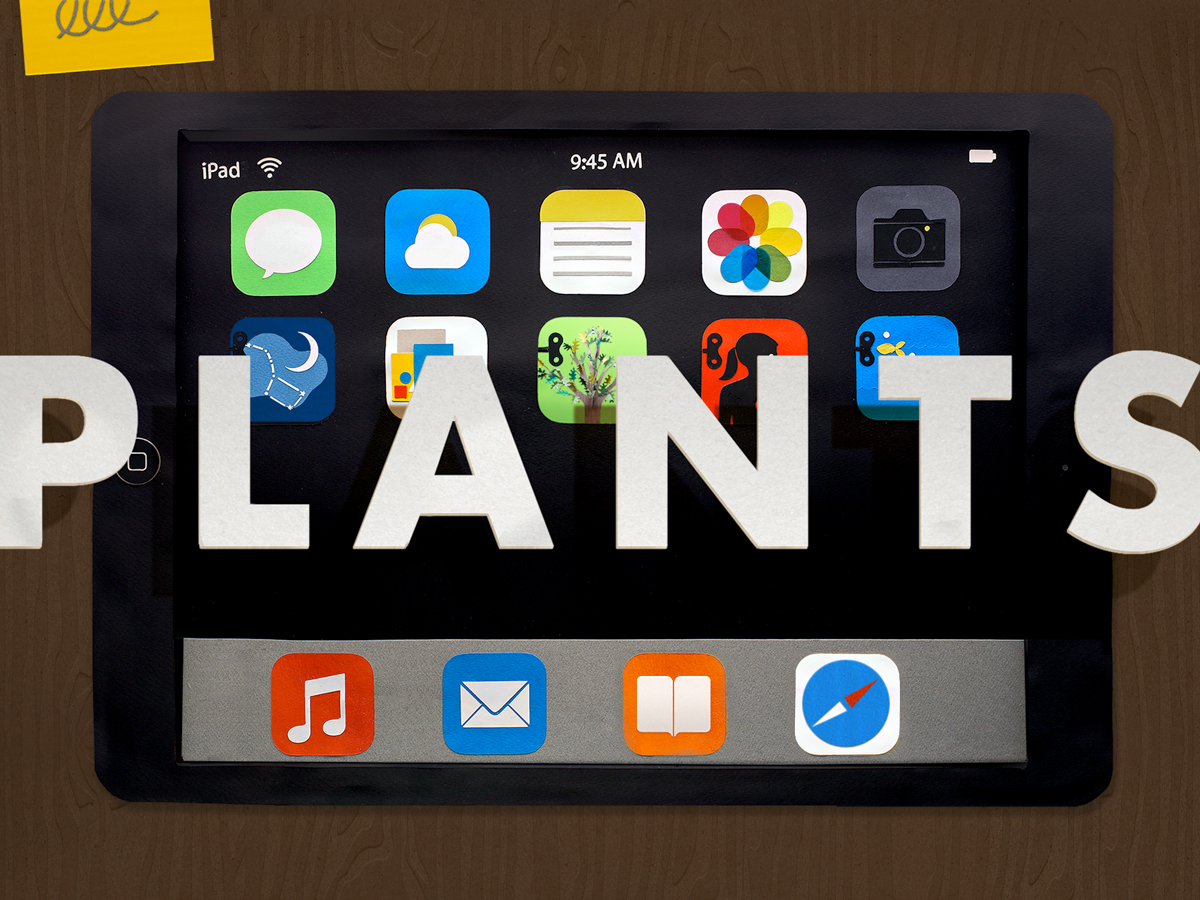 The app illustrations were created by Marie Caudry in her lush, saturated, pen-and-ink style. Figuring out how to translate the flat drawings into 3-dimensional space was a bit of a challenge. Here’s how I went from Marie’s badger to the final, waddling badger-character in the video:

Assistant-extraordinaire, Jessie Sattler, and I began the set-building process by tracing the shapes from Marie’s drawings in Illustrator. Badger legs and badger hairdos were drawn… as well as every single leaf-shape and tree trunk. (The trees are all accurate—maple leaves are on maple trees, beech trees got be-leafed with beech leaves, etc.) 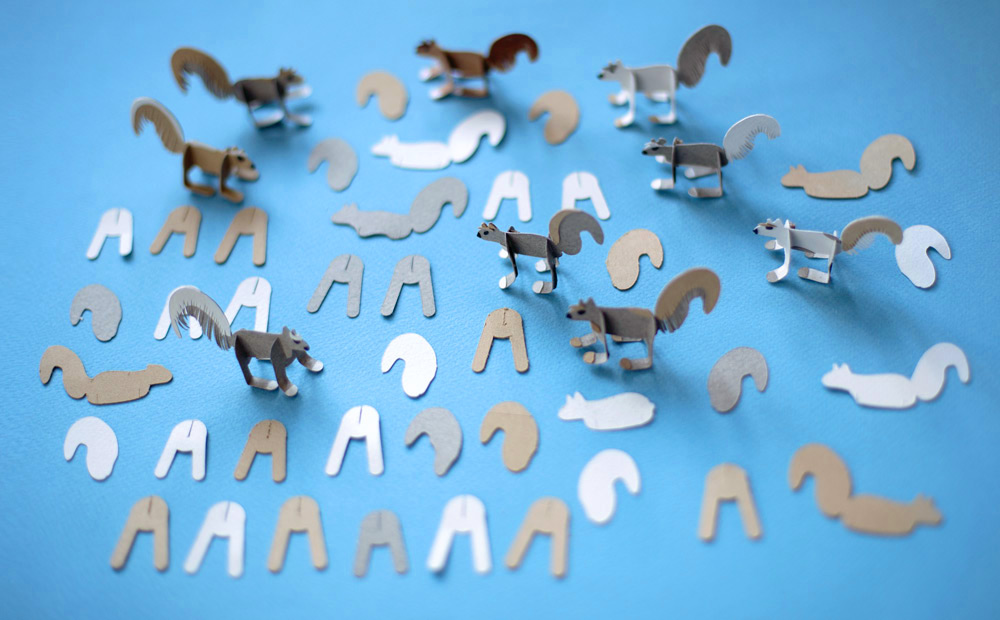 I then exported those drawings to a desktop paper cutter (cutting only the more microscopic shapes by hand) and Daniel, Jessie, and I built the set over the course of several weeks. Alina and Seung-Yun helped out by glueing-on an obscene amount of leaves, grass, and squirrel features. 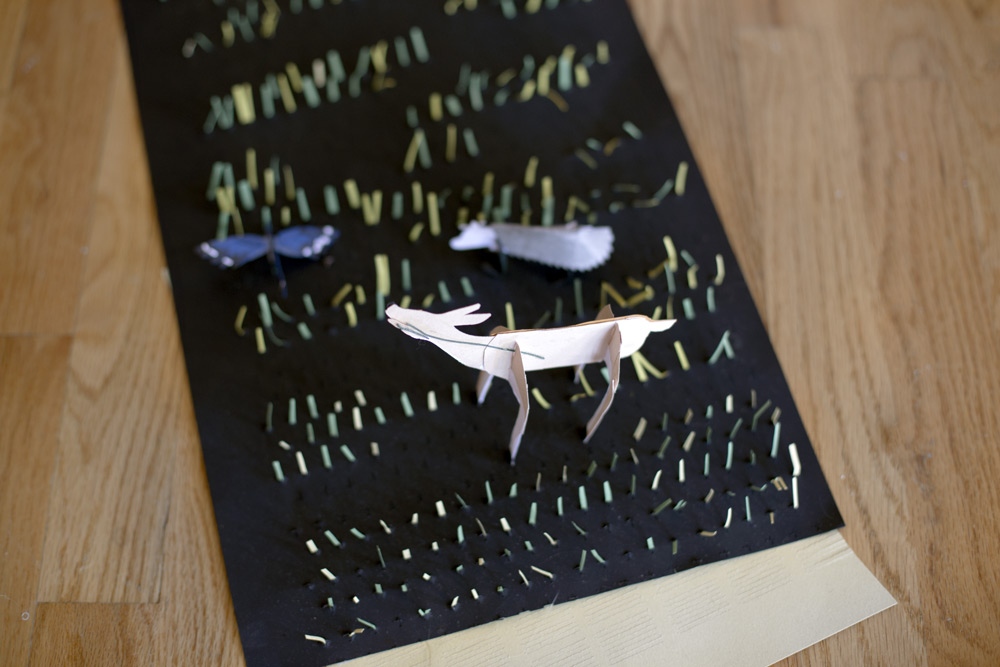 This is how we made the animals animate-able: floral wire and glue ensured that we could make the creatures move with 24 frames-per-second accuracy.

Here is a behind-the-scenes video about how we made the stop-motion by Jacob Krupnick-aka-Wild Combination:

Daniel adjusts the camera before shooting the iPad/icon fly-through. We duct-taped the tripod to the ladder and used the tripod crank to fake the “crane” shots: 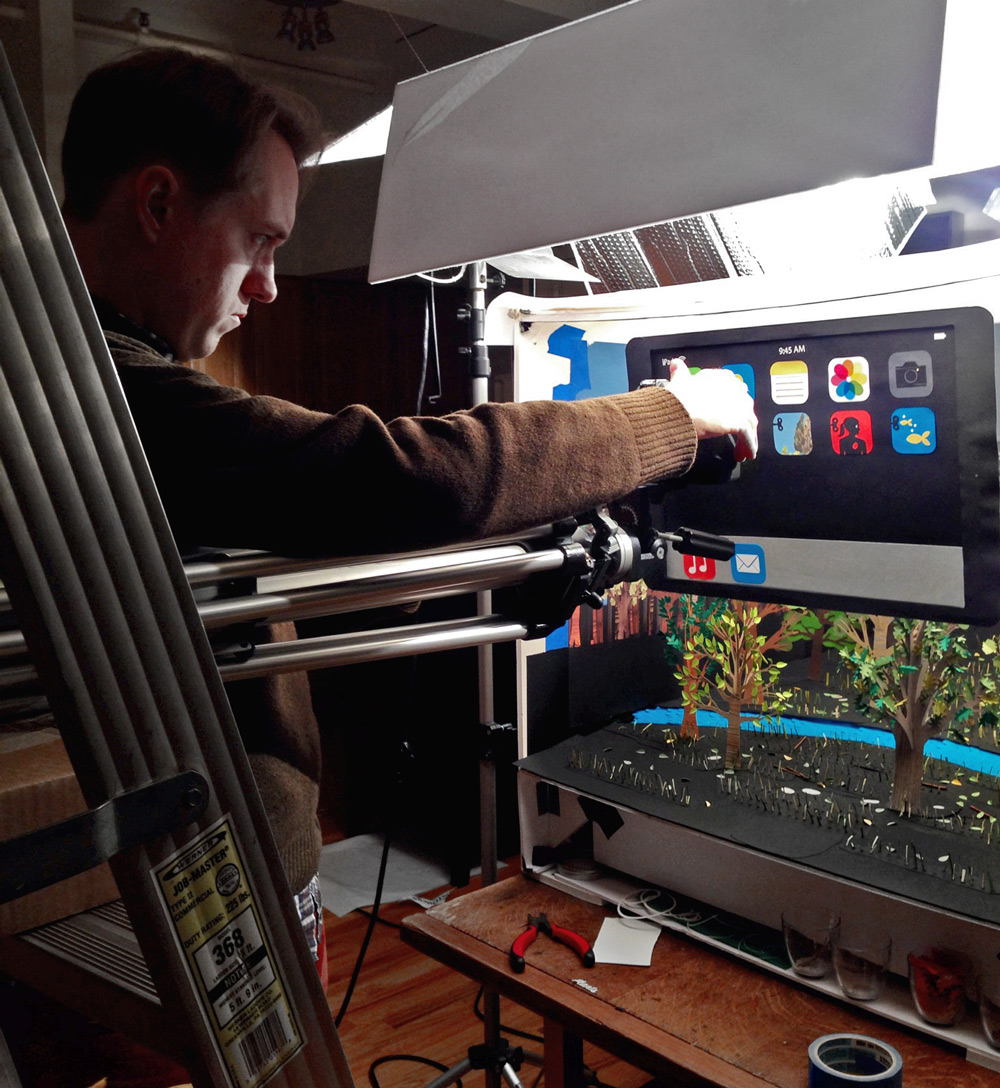 From the beginning, we hoped that the extremely lo-fi nature of the equipment+materials employed here would be a small critique against the normal barriers-to-entry of the professional video world. That kids viewing the video would see the analog animation artifacts as a roadmap to making their own creation. I insisted, almost dictatorially, that there should be NO trickery. (However, I can see now that there were more than a few instances (like the above scenario) where we did things the loooong way and only later learned of a professional tool which would’ve made the task far more efficient.)

This intentional transparency is a logical fit with the transparency that Tinybop seeks to bring to kids about their world. Their tiny-app-world models demystify the mechanisms of the human body and now—the mechanisms of plant-ecosystems, transmitting a sense of mastery on the screen that will actually carry over into the real world. This promotes an understanding of a world that is complex but is one in which hypotheses can be made and patterns can be realized. It feels really great to be able to contribute something to a project in service of that goal.

19 Responses to “A Paper Forest”