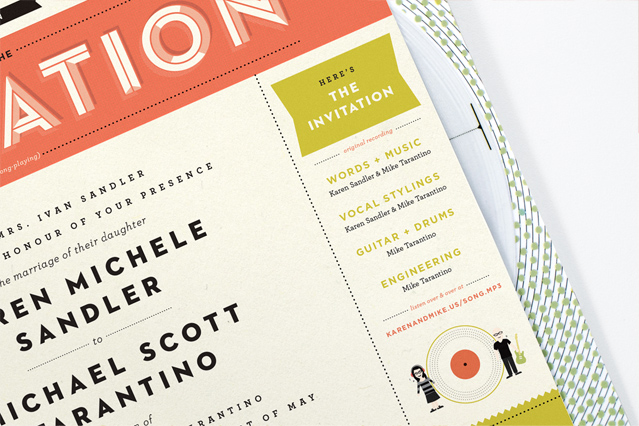 I just finished up a really fun project—a paper record player wedding invitation! In the booklet-style invitation, a bit of paper-folding amplifies the sound of a sewing needle moving along the grooves of a flexidisc record. The hand-spun record yields a garbled, but scrutable listening of an original song by the couple. It requires a bit of tinkering and folding —effectively championing the inner science-nerd kid in the recipient. The whole thing serves as an interactive packaging for the song—which can be experienced on the paper record player, unscrewed + set on a regular turntable, or enjoyed online (for the non-nerds and/or audiophiles out there.)  Here is a video of the player in action:

So that’s what it is. Pretty cool, eh? Download the entire song here. It is under a free culture license, so you can even remix it if you feel compelled.

Although this project really begins with Mr. Wizard re-runs in the 1980s, we started thinking about it a few months ago when Karen and Mike realized that they needed an invitation to their Spring wedding. Mike and Karen are two pretty awesome friends of mine—Karen advocates for the rights of programmers/inventors/coders as a lawyer at the Software Freedom Law Center (and DJs by night) and Mike is a Grammy-nominated sound engineer. I’ve long considered their love of music and collaborative auditory endeavors (such as their Oscar Meyer WeinerMobile-Girl song) a touching aspect of their relationship and an important part of our friendship (I met Karen at a concert.) It therefore felt really important that the invitation reference the social role of music in bringing people together… and ideally would feature an original song by the couple to seal the deal. Karen and Mike immediately got it, loved the idea, and wrote the catchy track that appears on the flexi. We then only had to figure out how to make the invitation play it… 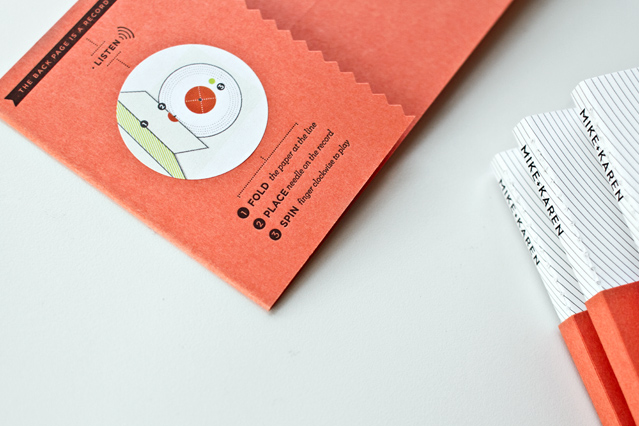 Our little research and development group (comprised of the couple, me, and my better half, Daniel) propelled the project forward through myriad (and oft-disappointing) material trials. We all fumbled around with piles of different types of paper, needles, screw posts, felt, cork, adhesive with the determination that some combination of these things could work. Mr. Wizard made it happen after all. 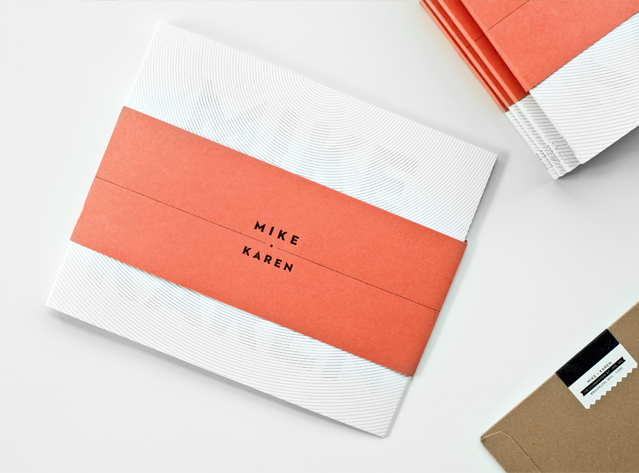 The resulting booklet is comprised of a cover, two inner pages, a letterpressed band (with instructions and a tear-off RSVP postcard), and a flexdisc on a screwpost. The recipient bends the second page of the booklet back to create a tented “arm.” With the needle placed, they then carefully spin the flexidisc at 45 RPM (ish) to hear the song. The sewing needle travels the length of the song and produces the sound. Its vibrations are amplified by the thin, snappy paper to which it is adhered. To keep the needle down on the record, we reinforced the back of the “tent” with a spray-mounted half page of heavier cardstock. To reduce friction between the acetate flexidisc and the backing cover, we had the inside of the booklet laminated to be slick and conducive to hand-spinning. 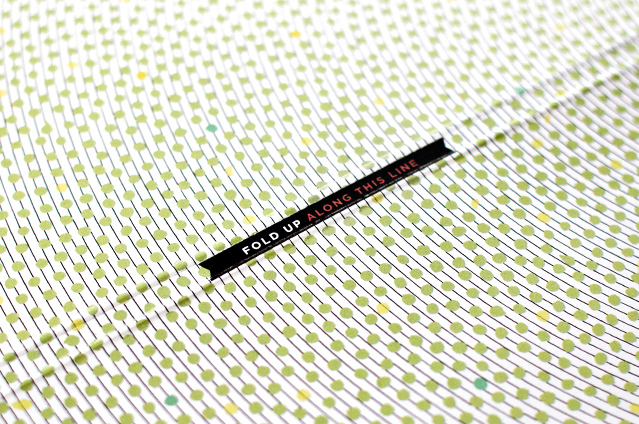 A major breakthrough came when we realized that the ideal sound was produced when the tented page created a perfect right triangle with the flexidisc. The needle needed to be perfectly perpendicular to the flexidisc. (@Pythagorean theorem: at long last, you are an ally!) We also discovered that the “tent” needed two loosely-swinging bends to allow the record needle to travel as freely as possible. By creating two parallel folds, we essentially made the angle at the peak of the tent variable as needed. At the beginning of the track, the ideal angle of this peak is about 15 degrees. By the end of the track, the arm needed to stretch further towards the center of the flexi, with an ideal peak angle of about 35 degrees. 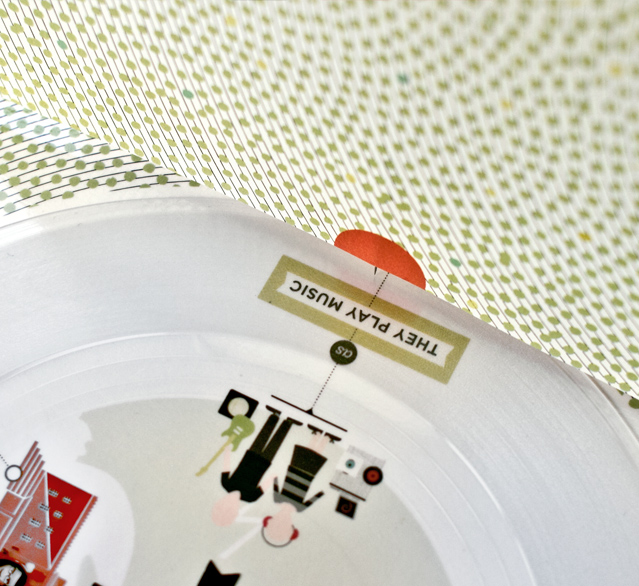 We never did track down the right screwposts. The minimum height of all screwposts in the whole damn world is 1/8″ (we wanted 1/16″) The hole in the flexi was a standard-sounding .25″, while the girth of all screwposts is .21″. So we painstakingly wrapped the posts with 5 inches of .5mm contact paper for a snugger fit and less wiggle. While not all of the parts are ideal (and the player does not sound like Bose by any stretch of the imagination) it does produce sound and audible lyrics even!

But… With all of my music in mp3 form now (not to knock that evolution), it has been really fun to tinker with the reality of music as tangible, physical vibrations—an abstraction so elegantly expressed by the wavering grooves of a record. The connection of paper with needle with record with finger is gratifying. The warbled drumbeats and seasick guitar feel like an orchestra propelled by tiny finger movements.  There is something alchemical and magical about these humble, non-engineered materials producing sound (even though that sound is incredibly lo-fi.) 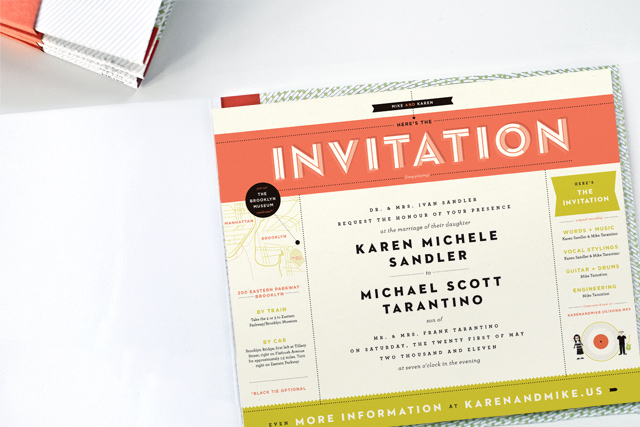 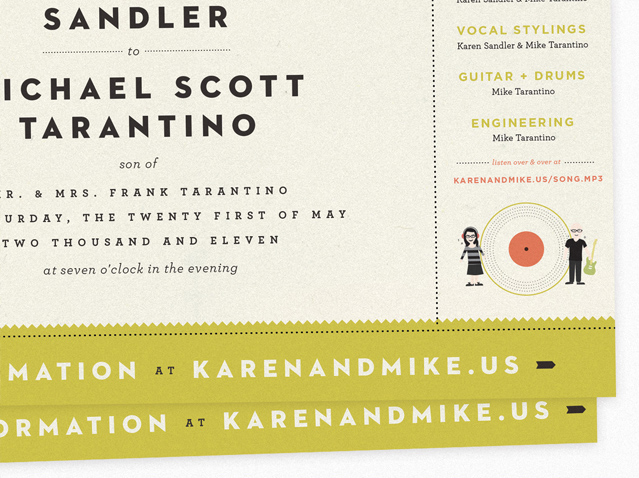 As a fallback measure (if the record-playing didn’t work for whatever reason), the package sure as hell had to look great. The cover and interior page patterning was inspired by concentric record grooves. The clear flexidisc functions as both a traditional record and as sort of an interactive story of Mike+Karen’s future together. The disc is foil stamped with a simple black illustration of the couple, along with the message to “please join Mike and Karen… .” This phrase and the simplistic illustration are completed by turning the transparent record to 6 o’clock – “… at their wedding”, 9 o’clock – “… as they play music together,” 12 o’clock – “… as they eat / drink / be merry,” and 3 o’clock – “… as they grow old together” (complete with a muu-muu for Karen and some plaid golf pants for Mike.) 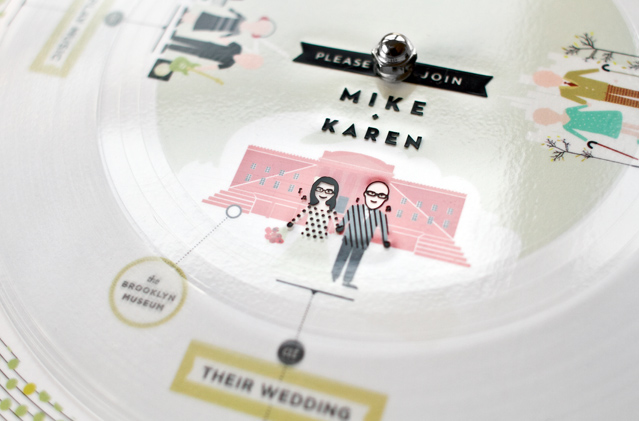 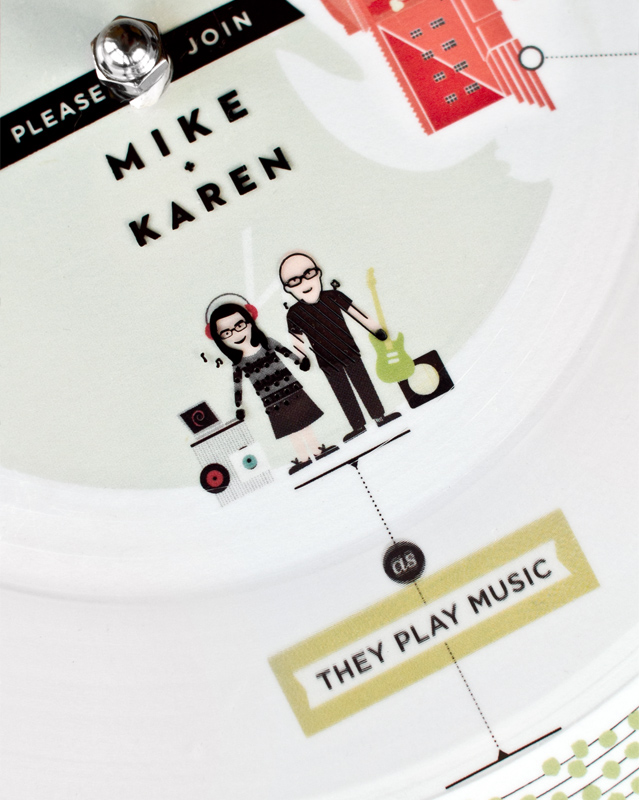 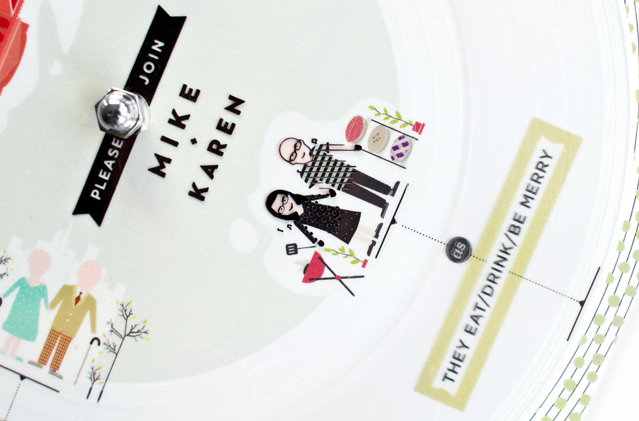 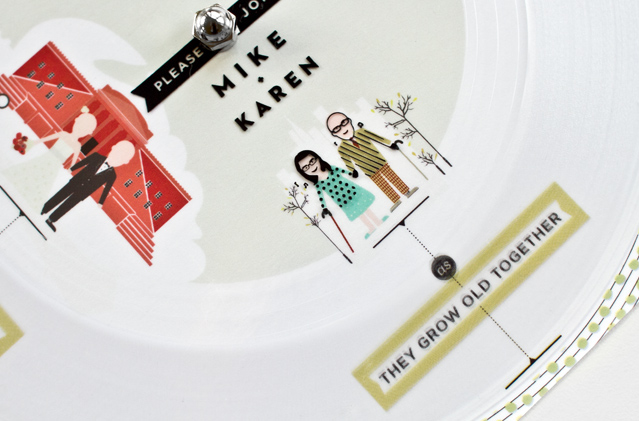 Thanks Karen, Mike, and Daniel for being idealistic and working hard with me on this one. Thanks Pirate’s Press for making flexis for us!

PS- Influence graphics printed the digital offset parts and I printed the bands at The Arm in Williamsburg. 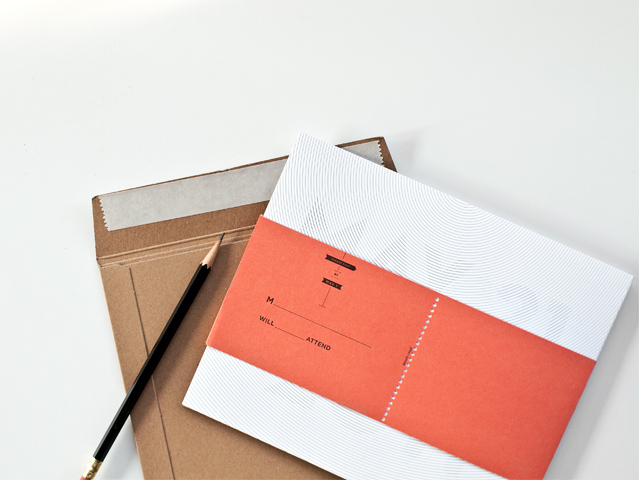 238 Responses to “A Paper Record Player”